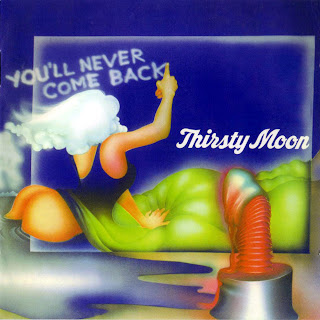 Thirsty Moon uses the elements of jazz as a means of spontaneous expression and melts them together with the aggressiveness and rhythm of rock. They play only their own compositions, connecting voices with instrumental parts and utilizing all electronic possibilities. In spite of all their variety Thirsty Moon has a remarkable sound. Every member of the group knows his instrument perfectly. Everyone is a individualist who adds characteristic features to the group. The basis of the music is the precise playing together of the bass and drums and the Afro sounds of the four congas which connects the hard beat with the Latin American rhythms. The electric piano and the guitar combine to form another important element to the sound.

The saxophonist is an experienced jazz musician who gives the group the exquisite spontaneity of jazz. Unlike many German groups, Thirsty Moon’s lyrics are an essential part of their sound. They reflect the impulses of their surroundings. Thirsty Moon is not a typical German group and they do not want to be one. The texts are English. The musical influences are from various cultures in the music world.

Thirsty Moon do not follow any particular trend and they do not wish to be commercial. Thirsty Moon has a sort of ultimate versatility which does not rely on overused, accepted riffs and styles. Their versatility, on the contrary, comes from a whole array of lines which have not even been used yet! “Yellow Sunshine” has pieces that are so completely phased that the listener cannot tell what instruments are playing the phased lines. “Trash Man” has horn parts resembling The Grand Wazoo in perfection and complexity, but the horns overlay Santana-like rhythms instead of the “old-timey” jazz tones of Zappa’s recording.

This is not to say that Thirsty Moon has the traditional copied sounds of the successful groups. Nobody sounds like Thirsty Moon. No other band has so completely captured the elusive phenomena inherent in acid rock and placed it so effectively in a jazz-rock format. Thirsty Moon’s sound is a mirror ball of images surrounding the listener.
Translation: Dr. Martina Häusler (originally taken from Skylab review) 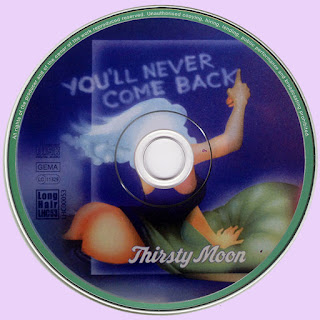