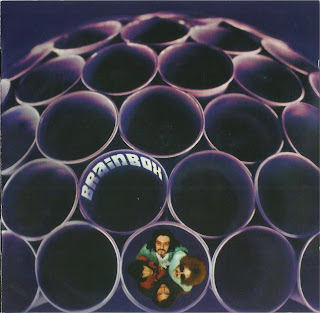 Being an avid Focus fan during the 70’s (Focus At The Rainbow is for me one of the best live albums ever) I was familiar with Dutch band Brainbox, albeit in name only. They figure in the Focus family tree due to the presence of the great Jan Akkerman on guitar and the equally fine Pierre van der Linden on drums who both feature on this 1969 self titled debut release along with singer Kazimierz (Kaz) Lux and bassist Andre Reijnen.

Expecting to hear traces of the sound that would define Focus, I was a little surprised by much of the musical style by this Dutch quartet. They produce a variant of British blues rock as popularised by exponents like Rory Gallagher and The Groundhogs with a touch of earthy American blues thrown in for good measure.

After the band began rehearsing in early 1969 much of the songs including Dark Rose and Woman's Gone seem to have originated from jam sessions, and it shows.

For example the lengthy Sea Of Delight (which took up most of side 2 on the original vinyl release) seems to be one long bout of spontaneous improvisation sandwiched between Lux’s brief opening and closing vocals. Akkerman’s playing here is not too dissimilar to Peter Banks’ style of soloing with Yes which is not surprising given that Banks was an early admirer of Akkerman’s technique. The bass and drum solos are also impressively performed; in fact these guys could hold their own with most any other rhythm partnership from the same era.

The only other song from the original album that isn’t a cover version is the opening Dark Rose. In addition to some fast and frantic playing from Akkerman and inspirational drumming from van der Linden, guest Tom Barlage adds some spirited flute soloing of his own. Probably the most striking aspect however is Lux’s raunchy, expressive voice which sits somewhere between Robert Plant and Rod Stewart.

The album’s cover versions include three well known and two not so well known tunes. In the latter category are two authentic American blues numbers in the shape of Jimmy Reed’s Baby, What You Want Me To Do and Lowell Fulson’s Sinner's Prayer. The style here perfectly suits Lux’s convincingly raw delivery. Of the others, Tim Hardin’s poignant Reason To Believe is given a jaunty rhythm and is nicely performed (two years before Rod Stewart made it famous) whilst a reverential version of the George Gershwin standard Summertime features Akkerman on Hammond organ in addition to guitar.

The remainder of this re-mastered reissue is made up of no less than eleven bonus tracks almost doubling the length of the original album. These songs come courtesy of the string of Dutch single releases the band enjoyed between 1969 and 1970 bringing together the complete output of this line-up. Several of these songs enjoyed commercial success and it’s not too difficult to see why. They are mostly fairly catchy, mid-tempo affairs with lead voice to the fore and noticeably less ambitious guitar work as the tracks progress.

The two songs that probably comes the closest to the sound on the album are Woman's Gone and Down Man. In the former Akkerman’s bluesy licks echo Eric Clapton (albeit with a harder edge) as well as featuring some fine piano playing from guest Rob Hoeke whilst Kazimierz’s husky delivery during the latter this time evokes Steve Marriot.

Of the rest, the memorable ode to the band’s home town Amsterdam - The First Days includes some surprisingly funky guitar work whilst the boogie riff driving So Helpless recalls Humble Pie. The mid-tempo rocker Doomsday Train is reminiscent of The Who with a touch of AC/DC in contrast with the laidback country rock feel of The Smile [Old Friends Have A Right To] with a vocal style that pre-empts The Eagles and America. In fact the majority of these latter songs sees the band evolving from there earlier bluesy style into a more laidback soft rock sound.

Jan Akkerman left Brainbox soon after the album’s original release although he didn’t so much jump as was pushed. By all accounts the band’s dictatorial manager wasn’t happy with the fact that the guitarist was occasionally moonlighting with other musicians including an organist/flautist by the name of Thijs van Leer. This of course opened the door for the formation of Focus and a year or so later Pierre van der Linden would also jump the Brainbox ship and join them.

In the meantime Brainbox continued with no less than three guitarists appearing in Akkerman’s wake as well as a replacing the bassist, drummer and even the vocalist at various points before the band disbanded around 1972. The subsequent years has seen several Brainbox reunions and gatherings for one-off concerts and currently a line-up that includes Kaz Lux and Pierre van der Linden (but no Jan Akkerman) regularly performs in the Netherlands and is also putting together a new album.

To the end, this release does demonstrate another dimension to their playing and overall the musicianship is superb throughout. Lux’s singing is also a revelation, possessing one of the best rock voices I’ve heard for some time. If you remember the band from first time around with affection the wealth of material here makes it highly recommended.
by Geoff Feakes 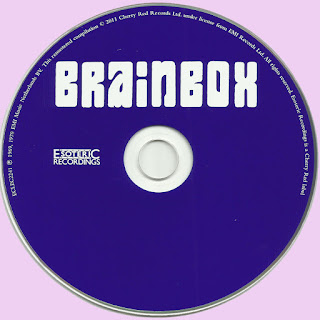 Free Text
the Free Text
Posted by Marios at 5:02 AM 14 comments: