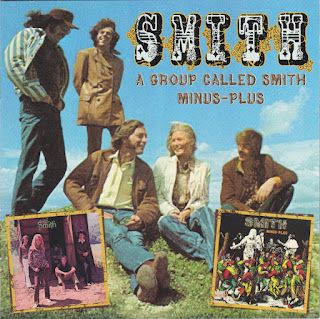 Smith were discovered in an L.A. nightclub by none other than Del Shannon, who got them signed to ABC-Dunhill and arranged their smash hit cover of “Baby, It’s You.” They also boasted one of the best albeit largely unknown female singers of the ‘60s in the person of Gayle McCormick, who, with her blonde good looks and powerful, bluesy voice, seemed destined to lead Smith to big things (she did go on to record a series of solo albums for Dunhill).
Featuring three lead singers and a B-3 Hammond organ, their strongest asset was their most frequent vocalist, Gayle McCormick, an accomplished female blue-eyed soul belter. Most of their material consisted of covers of popular rock and R&B tunes, and they broke up after a couple of albums, though the singles "What Am I Gonna Do" (co-written by Carole King) and "Take a Look Around" made the middle of the charts. McCormick had a couple of small hits in 1971 and made a few albums in the early '70s as a soloist.
by Richie Unterberger 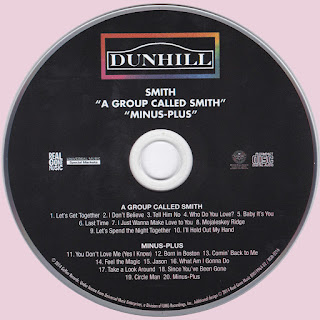 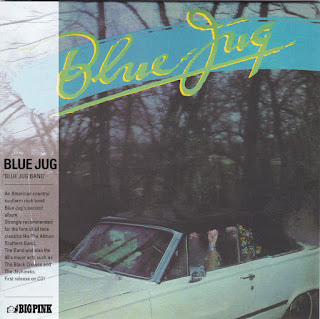 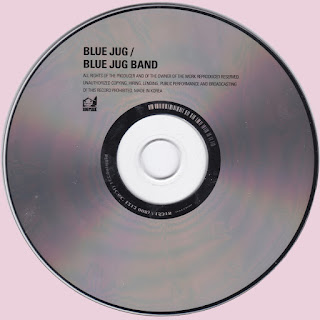 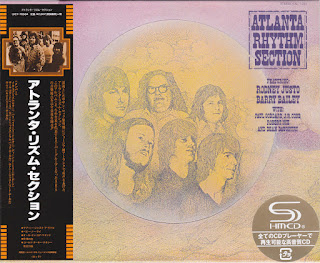 The story of the Atlanta Rhythm Section began in Doraville, GA, a small town northeast of Atlanta, in 1970. Local Atlanta engineer Rodney Mills built a new studio in Doraville with the support of music publisher Bill Lowery, producer/songwriter/manager Buddy Buie, and songwriter/guitarist J.R. Cobb. The studio was dubbed Studio One and would become one of the preeminent studios in the Atlanta area. Over the years, artists who recorded there included Al Kooper, Lynyrd Skynyrd, Joe South, Bonnie Bramlett, Dickey Betts, B.J. Thomas and Billy Joe Royal.
The Atlanta Rhythm Section originally came together as the house band at Studio One. Buie and Cobb had been part of the group the Classics IV - remembered for hits including "Spooky," "Stormy" and "Traces." Buie recruited three musicians he had worked with previously in the Candymen, a group that backed Roy Orbison-singer Rodney Justo, keyboardist Dean Daughtry and drummer Robert Nix. Two talented local session players also joined in-guitarist Barry Bailey and bassist Paul Goddard. These musicians played on a number of other artist's records and the decision was made to make an album on their own.
Buie wanted the best players doing his songs as a guitar based band, and he wrote, produced and managed ARS from the start. Buie, Daughtry and Nix did a lot of the songwriting together. The Rhythm Section would play on other's albums 3-4 days a week and then work on their own material. They recorded a demo featuring instrumentals and over a couple of years pulled together material for an album. The demo got them a two record deal with MCA/Decca, and so ARS officially began.
The ten songs that make up ARS' self-titled debut album were recorded at Studio One in Doraville, GA in Nov. 1971. Producer/songwriter Buddy Buie wrote nine of the songs in partnership with others in the band. While the sound of the album may have become a little dated over time, what still comes through today are two traits that ARS was starting to refine and would prove to be their strong points over the years-great songwriting and excellent musicianship.
The album was released in 1972 and generated some critical interest for the quality of the songs and musicianship. But there was also some questioning of the idea of a rock band made up of a group of studio musicians who hadn't paid their dues on the road. The album didn't produce any hit songs, so the group continued to play on other artist's records at Studio One.
It was during the recording of the first album that Ronnie Hammond came to Studio One as an assistant engineer for Rodney Mills. He was skilled on multiple instruments and most importantly had a great singing voice. When singer Rodney Justo decided to leave the group to pursue a solo career, Hammond became the new lead singer. This group of musicians would go on to make the next six ARS albums together. In 1972, the group tried to broaden their approach as they worked on their second album for MCA/Decca.
ARS 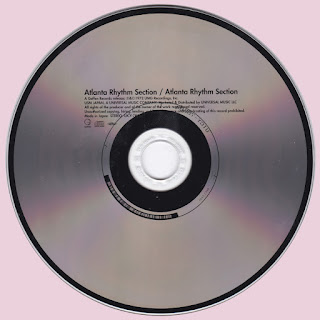 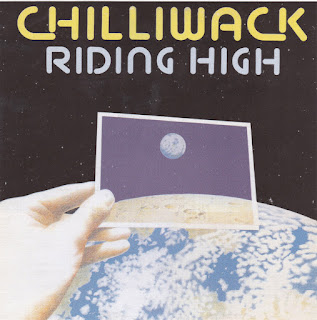 After a year on the road, "Riding High" hit the stores in the spring of '74. The record was released on Terry Jacks' Goldfish Records label. Jacks also brought his experience in the business, (co-founder of The Poppy Family and his solo hit "Seasons In The Sun" that same year among others) to the studio and served as co-producer with Mike Flicker. By the end of the year Chilliwack practically owned the airwaves, with the title-track, "Come On Over" the absolute classic "Crazy Talk" and the raucous and rowdy "There's Something I Like About That".
“Crazy Talk” is a song about a woman whose serial lying is crazy making for the man in her life. The singer warns that this woman can “make a man a ruin.” The origins of the word ruin have to do with the remains of a building or a city that has fallen into decay or been destroyed in war, fire, flood or earthquake. Over time the word, ruin, also referred to the downfall, decay, or destruction of anything. Sometimes one’s ruin is brought on by recklessness and carelessness. In the case of this song, there have been men who haven’t been alert to the nefarious qualities of this particular woman. The ruin of a human being suggests the complete loss of health, means, position, hope, or capacity to be restored.
Music critic, Richard Skelly, provides some background information about the album and the singles from Riding High. “Terry Jacks produced “Crazy Talk” at Can-Base Studios just before that operation changed hands and became Mushroom Studios. Both on “Crazy Talk” and “There’s Something I Like About That,” Terry used Mike Flicker and Rolf Hennemann for engineering the sessions. The pair had also helmed the boards for Terry’s megahit Seasons In The Sun. Flicker—who later produced Heart for Mushroom Records and then Portrait/CBS—produced the remaining Chilliwack tracks for the Riding High album. Sire Records picked up US distribution, but didn’t manage to hype “Crazy Talk” past the very lowest rungs (#98) of Billboard.
Sire did commit to having Chilliwack fly to New York to record sessions with Richard Gottehrer, a Garage-rock guru famous for recording ‘60s rockers like The McCoys. Riding High was the first Chilliwack recording to feature new member Howard Froese. Brother of future Vancouver tv news anchor Russ Froese, Howard hailed from Terrace where he and fellow high schooler Jim Vallance formed a band in the summer of 1969. Vallance reportedly wove memories of those idyllic teen times when he later co-wrote Summer Of ‘69 with Bryan Adams! A gifted guitarist, Howard also played keyboards and sang harmonies.” Skelly adds that Froese co-write one of the tracks on Riding High titled “Far Side Of The Sun”. This was “a mini suite inspired by a sci-fi movie all four Chilliwack members watched on tv late one night after a gig.”
by Ray McGinnis, December 20, 2017 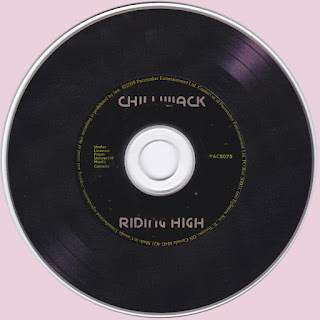 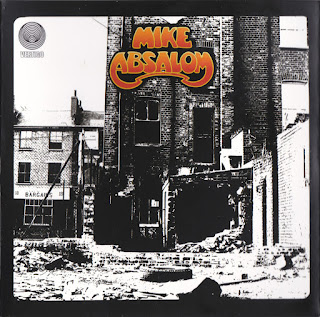 A British singer songwriter with an eccentric sense of humour and flair for poetry, Mike Absalom was signed to the progressive Vertigo label, that released this album in 1971.
A rare collector’s item for many years, the original LP was graced by the artwork of Roger Dean, later to find fame as the sleeve designer for Yes, and many other Seventies artists. The cover art depicts Notting Hill scenes and amusing characters from Absalom’s quirky sagas - such as ‘John The Bog’ and the ‘Ernie Plugg’s Bust’.
Produced by Patrick Campbell-Lyons - of 60s group Nirvana fame, this collection recalls the extraordinary diversity of the Prog Rock Folk scene.
Mike Absalom
Mike Absalom was a genuine oddity on the late-'60s/early-'70s U.K. scene, a singer/songwriter with a bent sense of humor that seemed to be driven as much by a heavy load of illicit pharmaceuticals as by a skewed worldview. Unlike the contemporary Syd Barrett, however, Absalom did not become an acid casualty. He recorded one album for Saydisc in 1969, a disc that escaped under the title of Save the Last Gherkin for Me, and he set out on a career of busking and living hand to mouth. Producer/A&R man Patrick Lyons - of Nirvana U.K. fame found his attention engaged by Absalom's music when the singer/songwriter was playing for small change in a London Underground station, subsequently signing him to Vertigo Records.
Absalom toured throughout the U.K., playing the college circuit and small clubs throughout the early '70s. The Vertigo contract yielded a pair of albums, of which Mike Absalom - 1971 seems hardly to have been noticed, despite a Roger Dean sleeve that doubled as a poster guide to Notting Hill Gate. 1973's Hector and Other Peccadillos garnered a little more attention, but not enough to prevent Absalom from vanishing from sight for some time.
Absalom eventually resurfaced in Canada, and currently lives in Maple Ridge, British Columbia. Over the years he has expanded his repertoire considerably, performing Celtic music under the name of Mike Absalom & the Squid Jiggers, as well as a variety of harp music. He has become popular in western Canada for both the variety of his music and his continuing strange humor.
by Steven McDonald 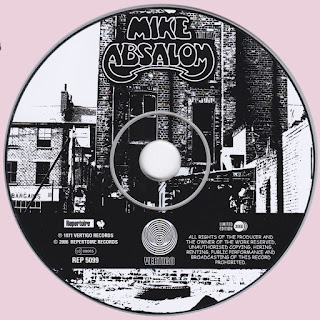