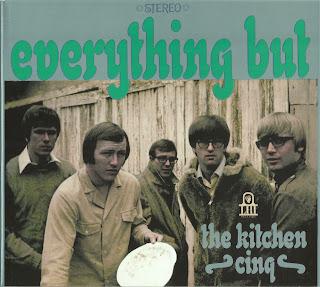 When buying albums by '60s rock bands, ground zero is 1966. If I'm hesitant to spend the cash, proximity to that year makes a difference in whether I end up springing for something or not. One of the better discs I've ponied up for in the past year is Everything But ... The Kitchen Cinq, the only album by a fairly obscure band with origins in Texas. From what I can tell, it actually came out in early- to mid-1967, but I'd bet it was recorded in '66, which would place it right in the magic 8-ball of my unscientific theory. Unfortunately, the mono copy I scored online is pretty beat up, but the music more than justified the cost of finally obtaining a copy.

Information about the band is scarce, but Mike Dugo of 60sgaragebands.com has come to the rescue once again with his excellent interview of guitarist Jim Parker, the best place to learn the Kitchen Cinq's story. To summarize briefly, the band was active as early as 1961 as The Illusions. They first had their name changed to the Y'Alls by impresario Ray Ruff for a single in '66, and again modified their moniker after moving to Los Angeles and getting involved with more famous impresario Lee Hazlewood. They released an album and several non-LP singles, before a lineup change and yet another name change, to Armageddon (not to be confused with the later Keith Relf band).

The music on Everything But... is a winning blend of harmony-drenched, poppy folk-rockers with the occasional fuzztone flip-out, such as band originals "Determination" and "Please Come Back to Me." Also excellent is the stop-start "You'll Be Sorry Some Day," not written by the band but a song probably first recorded by them, judging by the publishing credits.

The band proves very adept at integrating covers into their own sound, including managing to create a somewhat different spin than usual for Buffy Sainte-Marie's oft-recorded "Codine." They also take shots at Neil Diamond, the Beau Brummels, the Hollies (brave), Gene Pitney (extremely brave) and one song by Hazlewood. Luckily, it mostly all comes out sounding like the Kitchen Cinq.

Their album ended up being the first released on Hazlewood's LHI Records, an imprint best remembered today as the original home for Gram Parsons' International Submarine Band and Hazlewood's own cult classics. Everything But... was produced by Hazlewood flame/pre-Nancy Sinatra duet partner Suzi Jane Hokom, who gave it a bright and reverb-y, typically '60s production. In fact, the mysterious Ms. Hokom can be seen in the collage of band pictures on the back cover, surrounded by the band. There's also pics of the band surrounding Bill Cosby and Dick Van Dyke, apparently included to drive home a "we're in Los Angeles" message to the record-buying public.

These days, records on LHI rarely turn up, and this one is no different. Perhaps compounding its rarity is the fact that LHI's first distribution deal, with Decca, apparently lasted less than a year. After the label's first few albums the catalog numbers were reused for new LPs under a different distribution deal!

So, the Kitchen Cinq album was likely only available for a very short time originally. Like most of the LHI catalog (aside from the ISB album and Hazlewood's own work), it's never been given a proper reissue, but it can be tracked down from fellow collectors with a bit of internet searching, if one can't turn up an original LP. Now, if I could just find the Honey Ltd. and Eve LPs... (LHI, 1967).
by Bob Koch 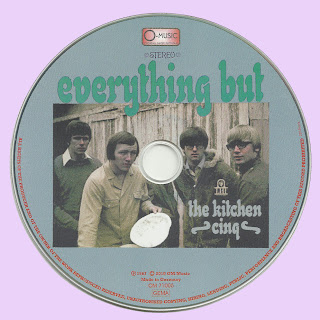