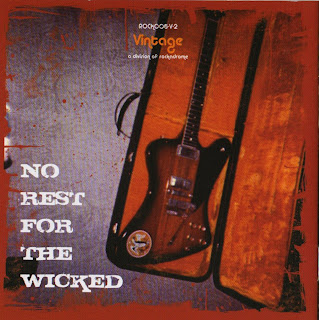 The late-'60s power trio format made famous by Cream and the Jimi Hendrix Experience sent inspirational shockwaves across the rock and roll universe, and among the most isolated examples of its influence must have been eastern Iowa's extremely obscure cult hard rock band Truth and Janey.

Taking their name from the seminal Jeff Beck Group album, vocalist/guitarist Billy Janey, vocalist/bassist Steven Bock, and drummer Denis Bunce (original percussionist John Fillingsworth lasted less than a year) began penning original material, recorded a pair of singles in 1972/1973, and then evolved into Truth and Janey when informed that another band already held rights to the Truth moniker before them. Arduous roadwork in the neighboring states kept the band busy in years to come, but the absence of a major record deal eventually drove them to finance their own album -- a fierce and bluesy hard rocker to be entitled No Rest for the Wicked -- at a studio in nearby Ames, IA.

This they released through a local independent label, and its 1,000-unit pressing quickly sold out among their dedicated fans in the region -- but that was it. With no apparent career-advancing prospects in their near future, Truth and Janey disbanded the following year, with main man Janey turning to blues and adding a "Lee" to his name before recording several albums throughout the '80s and '90s.

Truth and Janey's modest legacy was kept alive by their few cult followers and eventually led to an official CD pressing of No Rest for the Wicked by Monster Records (which added all four of their single A- and B-sides, to boot), and a legendary live performance released in 2004 as Erupts!
by Eduardo Rivadavia 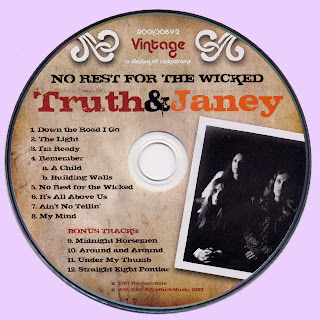 Free Text
Just Past
Posted by Marios at 5:58 PM 10 comments: