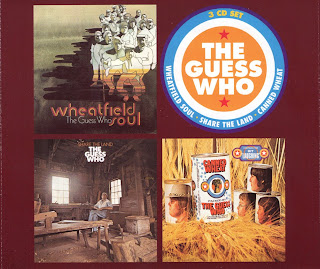 It's been a strange and chequered career for Canadian classic rockers The Guess Who. They were the very first Canadian rock group to have a number one hit in the United States and they even found themselves performing at the White House in front of an audience that included President Nixon and Prince Charles.

And yet ask most run-of-the-mill rock fans what they know about the band and it would possibly be that one-time guitarist Randy Bachman went on to form Bachman Turner Overdrive and have a hit with perennial drive time classic 'You Ain't Seen Nothin' Yet'.

And yet as these, three of the band's first four albums from the time when they were known simply as The Guess Who as opposed to The Guess Who? (more of which later) show that Canada was just as adept at coming up with a classic rock sound as its North American cousins just south of the border.

The Guess Who's early years are a jumble of local Winnipeg-based '60s bands. Primarily we start with The Silvertones, a band formed in the early '60s by singer Chad Allan. By 1962 they'd become Al and The Silvertones and also featured future Guess Who band members Randy Bachman, Jim Kale, Garry Peterson and Bob Ashley. The very same year they became Chad Allan and The Reflections and two years after that Chad Allen and The Expressions.

It was when this latter act recorded a cover of Johnny Kidd & The Pirate's 'Shakin' All Over' that the band's Canadian record label took it upon themselves to label the British-invasion style sounding single as The Guess Who?, either in the hope of implying to an unsuspecting record buying public that they were either a well-known British band akin to The Beatles, The Who or The Kinks, all of whom were fast-gaining favour in North America, or maybe even a collection of well-known UK musicians banding together under a different name.

Whether the actual ruse worked with the public, the single was a success, hitting number one in Canada and 22 in America. However owing to DJ's insistence at referring to the band as Guess Who?, even when they knew it was actually Chad Allen & The Expressions meant that the band were pushed headfirst into changing their name.

Although between 1965 and 1966, the band were variously known and even credited as The Guess Who? and Chad Allen & The Expressions.

Allen himself left the band in 1966, initially to return to college, although he woul crop up as a presenter on the Canadian TV show Let's Go, whose house band jus happened to be The Guess Who? But by the time of the band's 1968 album 'Wheatfield Soul', they would finally be known as The Guess Who. It wasn't just the change to the name that was apparent by the time of 'Wheatfield Soul'.

With new singer Burton Cummings and guitarist Randy Bachman coming to the fore as the band's main songwriters, the musical emphasis had shifted away from the earlier UK inspired sound towards a more classic rock entrenched style.

The move almost immediately paid dividends, with the album's opening cut, the balladic 'These Eyes', cracking the US Top Ten, and whilst that particular style was evident throughout the album, on which the song 'Lightfoot' was a tribute to fellow Cabadian musician Gordon Lightfoot, the 11 minutes plus "Friends Of Mine" showed the band stretching out in a cavalcade of colourful neo-psychedelic and progressive flourishes.

1969's 'Canned Wheat' was even better, with the band finding their feet and proving themselves to be a solidly good heavy rock band.

Cumming's Paul Rodgers' style vocals were really starting to sound at home within the band's framework whilst Bachman's guitar tone proved he could mix jazzy touches with a basic hard rock style to maximum effect, not least on 'Undun', which proved to be the album's biggest hit.

Although not included within this set, 1970's 'American Woman' represents The Guess Who at their finest and was also Bachman's final recorded album with the band until a 1983 reformation.

The hard rocking and much covered title track gave The Guess Who their first ever US number one single, whilst the album reached number nine, remaining on the US album charts for over a year.

The band even found themselves performing before President Nixon and Prince Charles at the White House, although legend has it that Nixon's wife Pat requested the overtly sarcastic 'American Women' be dropped from the band's set.

With Bachman at odds with the band he quit following a show at New York's Fillmore East in May 1970. He was replaced not by one but two guitarists, Kurt Winter and Greg Leskiw for The Guess Who's second album of 1970, 'Share The Land'. The third of this packages albums.

However, if anyone thought that the departure of Bachman would severely dent The Guess Who's progress they were in for a surprise. 'Share The Land', which followed in the hard rocking vein of 'American Woman', not only continued to give the band hit singles with the title track and 'Hand Me Down World', but also proved a remarkably durable album, being the band's biggest selling, post-'American Woman'.

Following 'Share The Land', however, the band's fortunes took a nosedive, as Bachman's BTO career began to take off with 1974's 'Not Fragile' and the smash hit 'You Ain't Seen Nothin' Yet', and singer Cummings folded The Guess Who in 1975. It will probably come as no surprise to discover there have been several reunions over the years.

The first took place in 1977 without Cummings and Bachman, which led to bassist Jim Kale discovering the band's name had never been registered - he immediately acquired the rights and also tours and records with Jim Kale's The Guess Who to much less acclaim than any of the bigger reunions, in 1983 the 'American Woman' line-up reunited for some Canadian shows and recorded a live album, 'Together Again'.

Variations on the classic line-ups that recorded the three albums you have here have continued to reunite and play live shows for various causes over the years, whilst continuing to concurrently run their own solo projects.

Most recently Cummings and Bachman, been performing together under the title Bachman-Cummings. Jim Kale now co-owns the rights to the band's name with drummer Garry Peterson, also tour extensively in North America as The Guess Who.

So a chequered career as we said. But there's no denying the most fruitful era of The Guess Who, one of Canada's most successful classic rock acts, is represented by the material you have on these three discs. Enjoy
by Jerry Ewing 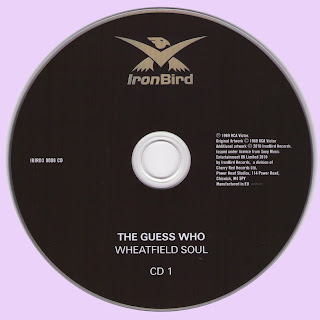 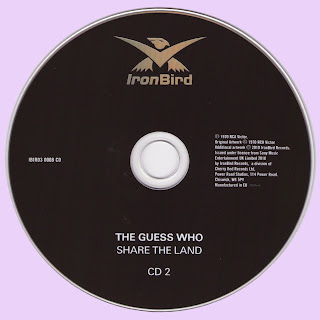