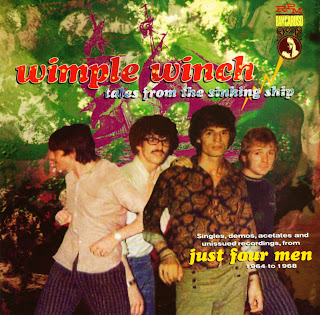 Liverpool's Wimple Winch are best known to obsessive collectors of U.K. freakbeat for a handful of rare but potent singles, such as the malevolent "Save My Soul and "Rumble on Mersey Square South," a mini-rock opera that feels like a more compact contemporary to the Who's "A Quick One While He's Away."

But Tales from the Sinking Ship, which collects Wimple Winch's singles for Fontana along with recordings that came from earlier and later incarnations of the band serves best as an object lesson in how radically the British music scene would change between 1964 and 1968. The set opens with a dozen sides recorded when

Dee Christopholus (vocals and guitar), John Kelman (lead guitar), and Larry King (aka Lawrence Arendes, drums) were members of the beat combo the Four Just Men (who briefly became the Just Four Men), who start out playing pleasant but unremarkable instrumentals not unlike what the Shadows were doing and eventually moved on to pop vocal sides that make them sound like competent but unremarkable also-rans on the Merseybeat scene.

They improved as they went along, and the last of the Four Just Men sides here are the best, the moody but dramatic "In the Shelter of Your Arms" and a solid cover of the Bacharach/David classic "Trains and Boats and Planes." However, when bassist Stuart Sirrett left at the end of 1965 and Barry Ashall took over in early 1966, something kicked in with this band, which adopted the new name Wimple Winch and embraced a far more aggressive and compelling sound, with a crispness that suggested the mod sound that was coming into vogue, along with shades of psychedelia creeping into "Atmospheres" and a dash of Ray Davies-style wit informing "Typical British Workmanship."

None of the Wimple Winch singles were hits, and this collection closes out with eight demos that confirm the group was continuing to evolve and innovate even after it was dropped by Fontana, with the psychedelic influences moving comfortably to the forefront and pop-minded pastoral accents coloring the melodies.

Phil Smee's richly detailed liner notes tell more about Wimple Winch's story than most fans will ever need to know, and a family tree makes it easy to follow the many personnel shifts in the group; this is fascinating stuff for those enamored of the point where beat music fell under the lysergic influence, and reveals just how weird a seemingly ordinary, clean-cut band could get during the first era of acid.
by Mark Deming 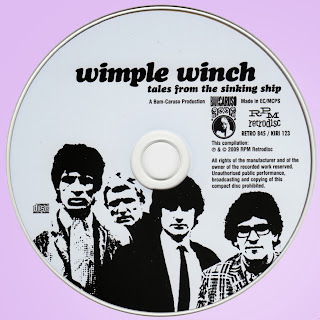 Free Text
Text Host
Posted by Marios at 2:14 AM 12 comments: