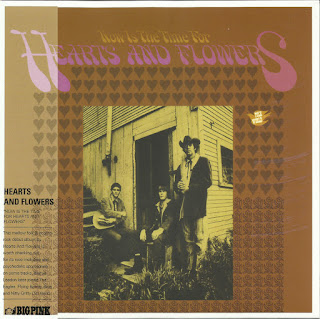 I first got wind of this superb group via a label catalog by the late, great Bam Caruso Records in 1985. I collected all the releases on that label during that time period, so naturally I grabbed a copy of "Now Is The Time For Hearts & Flowers" by Hearts & Flowers despite the fact I had never before heard of them. I trusted Bam Caruso completely as they had never let me down thus far.

Bam Caruso sort of specialized in all things beat & psychedelic so I was a little surprised when my ears got their first taste of Hearts & Flowers. They had a sound that was much more in step with bluegrass, country and folk than the then current psychedelic scene. However as I began to explore their music on a deeper level they were as psychedelic as anybody, they just didn't beat you over the head with it. There are moments on this album that actually remind me of the more reflective numbers on the 13th Floor Elevators "Easter Everywhere" album, most notably "Dust" & "I Had To Tell You."

When I first listended to Hearts & Flowers I was immediately transported to the hills of Kentucky or West Virginia. So it came as a surprise when I learned the group were based in Los Angeles, California via Hawaii. One of the group's lead voices Larry Murray had once been in a bluegrass group with future Byrd/Burrito/Manassas member Chris Hillman called the Scottsville Squirrel Barkers. Murray had teamed up with Rick Cunha who he had met in Hawaii, the duo eventually met singer Dave Dawson and Hearts & Flowers were born (having relocated to the Los Angeles area.)

Hearts & Flowers were very unique by the fact that they were not overtly influenced by the British Beat Invasion and did not employ the traditional rock rhythm section, although they originally operated without a bassist and drummer (they would eventually include bass and drums on their recordings, the drummer on this album has the same style as session drummer Eddie Hoh, but that's just a guess on my part.) Hearts & Flowers were signed to the mighty Capitol label and were teamed with Beach Boys production veteran Nick Venet.

"Now Is The Time...For Hearts & Flowers" was first issued in 1967 and it is a near flawless collection of original material and inspired covers. Larry Murray's "Now Is The Time" opens the set and provides a brief introduction to the band. "Save Some Time" is the first proper number and sets the tone for the brilliance that is to come, this number resembles the criminally underrated Beau Brummels during their "Bradley's Barn" & "Triangle" era. I'm also reminded of The Dillards, Gosdin Brothers & The Charlatans.

"Try For The Sun" is a Donovan song that Hearts & Flowers practically re-invent, you'd swear the song was written tailor-made for them, their cover is both vibrant and incredibly moving. "Rain, Rain" is a Larry Murray original that is a complete knockout and easily as good as the group's inspired choice of covers, Murray's voice is a dead ringer for Beau Brummels lead singer Sal Valentino. Another highpoint of the number is Hearts & Flowers totally unique vocal harmonies. "View From Ward 3" was lifted as a 45 (which of course flopped), this number features another group trademark Dave Dawson's hypnotic use of the autoharp, Dawson uses the instrument throughout the album and it gives the music the same spooky effect as Tommy Hall's "electric jug" moves with the 13th Floor Elevators. "Rock & Roll Gypsies" closes out side one in fine form, this one was also issued as a 45 and it could have drawn some chart action on the country or pop charts had it been promoted (which it wasn't), this number has a semi-rock beat married to the group's faultless harmonies and picking.

Side two opens with an original take on Tim Hardin's classic "Reason To Believe" which reminds me of the mid-60's Warner Bros. sides by the Everly Brothers. "Please" is actually a cover of obscure West Coast psychedelic group The Kaleidoscope (a song from their classic 1967 album "Side Trips."), I actually prefer Hearts & Flowers version in that the group's harmonies brighten an already great song. "1-2-3 Rhyme In Carnivour Thyme" is a light-hearted group original written by Rick Cunha, I know this might sound crazy but this song actually reminds me of the English group The Kaleidoscope (no relation to the USA group.)

"I'm A Lonesome Fugitive" is a Merle Haggard number that is probably the most C&W track on the record, this version is pretty true to the original and manages to capture the classic "Bakersfield" sound with ease. "Road To Nowhere" is a Carole King/Gerry Goffin number (also covered dramatically by UK group White Trash) that just might be the best track on the album. Hearts & Flowers make this classic song their own with Dave Dawson's signature autoharp colors, a creepy banjo in the background and the Hearts' everpresent soaring vocal harmonies (a female voice is added on this track and it is rumored to be Linda Ronstadt.)

The record closes with a spledid cover of Hoyt "Pusherman" Axton's "10,000 Sunsets" which has Dave Dawson pushing his autoharp in all directions against the eerie vocal harmonies. I think this song is most psychedelic piece on the record (though not in the traditional sense of the term.) So there you have it, "Now Is The Time...For Hearts & Flowers" is one of the most original records of it's era and of course that is saying a lot.
by Dave Furgess 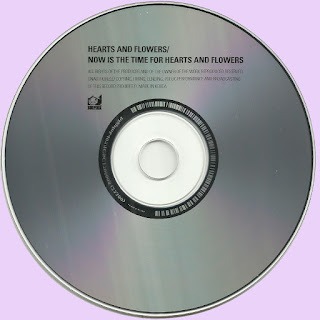 Free Text
Text Host
Posted by Marios at 11:23 AM 6 comments: