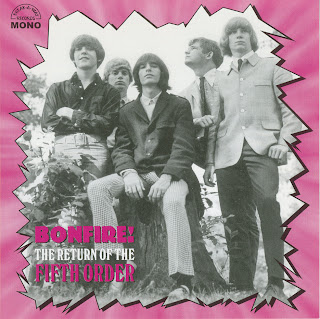 Their 1966 garage classic Goin' Too Far b/w Walkin' Away was a tremendous regional success, at the time becoming the biggest selling seven-incher from Columbus, Ohio. Their second local hit, A Thousand Devils (Are Chasing Me) b/w Today I Got A Letter, was picked up by Laurie for national release. These two records have long been recognized as sterling examples of Ohio's vibrant mid-60s garage rock scene. But the story of the Fifth Order has remained untold, until now. Digging into the band's history, a few welcome surprises emerged: a third 45 that collectors were not aware of, and - even better - a cache of unreleased recordings of exceptional quality.

"I'm truly amazed and flattered that anybody is still interested in the Fifth Order after all these years," says Bill Carroll, lead singer of the band from its beginning to the end. Bill now lives in California, as a regular, anonymous middle-aged guy and enjoys his life as a husband and father. He reminisces about the old days: "I had the greatest adolescence that a guy could have. My own car, money in my pockets, everybody knew who I was and I had more girls than any guy should have in a lifetime. It was a major blast!"

Jim Hilditch, the Fifth Order's lead guitarist, describes the heyday of the band in a similar way. "Life at that point was great. What a way to go through high school! Needless to say we had more girls than we could handle and it was surprising to figure out that you can make money too." As with most local '60s bands, the Fifth Order got started mostly for kicks. Billy Carrol, an aspiring drummer, met guitar player Jim Hilditch in 1963. Both were 14 or 15 years old and went to the same junior high. There was no real talk about putting a band together until February 7th, 1964, when the two saw the Beatles on The Ed Sullivan Show. "After that, all hell broke loose," says Bill of this defining moment for a generation of teens. "We knew we wanted to do what those guys were doing."

Bill and Jim found two guys from another junior high with similar ideas, and the first incarnation of the band was in place: Jim Hilditch (lead guitar), Mike Berand (bass guitar/vocals), Gary Steger (rhythm guitar/vocals) and Billy Carroll (drums/lead vocals). They named themselves the Electras, after the popular Buick sedan of the period.

The four started practising, alternately in Billy's living room or Jim's basement, where they quickly graduated from no-frills instrumental workouts to British Invasion-style vocal tunes. They improved rapidly, and in short order were ready to play out. The young band appeared at school events, weekend dances and private parties. The kids dug their sound, so the band kept rehearsing, and played as many gigs as they could. It wasn't long before they cultivated a loyal following.

It got to the point where they found themselves performing weekend engagements all over the state - "Much to the consternation of our parents", laughs Bill. Word about the new group spread, popularity grew and the first manager, Mike Leonard, came - and went. But before getting fired, Leonard introduced the band to Dick Murgatroyd and Jack Sender.

Dick was the producer and director of the popular local TV show Dance Party; Jack, a 22-year-old college student and songwriter, worked for the same program as a floor director. "I met the band at WLW-C TV4 in Columbus for the first time," he remembers. "Mike and Dick Murgatroyd got me involved. Dick was always trying to help everyone." While Dick became the Electra's manager, Jack Sender turned out to be the perfect songwriter for the band, coming up with a number of tailor-made songs for the boys.

Around this time the Electras had to reorganize themselves into a new band. "I always felt a little restricted being behind the drums and trying to do almost all of the singing. So we decided to bring me out front full time," says Bill. Mike Berand left, because his parents felt the band was taking too much time away from his schoolwork.

Jeff Johnson, another school chum, came in to play bass and Mike "Muff" Comfort replaced Billy on the drums. Jack Sender has another reason why Billy should have been featured more as a vocalist, "On stage Billy was an animal that the girls loved - the crowds went nuts for him and the band." It was also Jack who suggested the name Fifth Order to the band - car names like "the Electras" were considered old hat.

The Fifth Order became regulars on the Saturday afternoon TV show Dance Party, hosted by Jerry Rasor. This led to more popularity, more gigs - and the first record. In late 1966, the band travelled to a studio in Louisville, Kentucky and recorded two Jack Sender compositions: Goin' Too Far and Walkin' Away. Dick Murgatroyd placed the master tapes with a Cincinnati label named Counterpart, run by Shad O'Shay. Upon release, the record exceeded all expectations - it made it to No. 1 in Columbus where it sat for about four weeks, and charted all over Ohio and the Midwest. Bob Harrington, the top DJ for local radio station WCOL, told Jack that the 18,000 copies the band sold on Goin' Too Far made it the biggest selling local single ever in Columbus.

Diamond Records licensed it for national release, giving the band airplay in other states, but they turned out to be the wrong partner for a national break. Another problem was the lack of promotional effort the band could provide. "We were all still in high school at that time," explains Bill. "There was no way our upper-middle-class parents were going to let us quit school at 16 and 17 to wander around on the road all the time. This made it difficult to go out and push a record. So we really banged it only during the vacation breaks."

Shortly after the release of the record another line-up change occurred. Gary Steger left and Jeff Fenholt came in. "Billy and I saw Jeff play at a gig one night and flipped over his voice", recollects Jim Hilditch. "We approached Jeff and asked him to join the Fifth Order and, after a couple of days, he agreed. Jeff played guitar better than Gary and had a killer voice." Bill confirms this point of view. "Gary was a good guy, but Jeff really took the band to another level. He and I harmonized really well." The band now played the Dance Party show every three weeks and was busy working the local and regional live circuit with other local groups like the Dantes or the Grayps.

In the spring of 1967, it was time to release another 45. The group went again to Ray Allen's studio in Louisville and recorded a total of five Jack Sender songs: Bonfire, I Was A Fool, The Moment I Saw You, Today I Got A Letter and A Thousand Devils. The latter two were chosen as having the most hit-potential for the second single - although it has to be said that they are all terrific examples of mid-60s folk-rock, and any of the others would probably have served just as well.

Upon hearing the final product, Jack found that the recordings had been… "tweaked" somewhat. "The original version of Today I Got A Letter we recorded is 2:17 in length, the 45 version instead runs 2:30, and begins with a chorus instead of a guitar opener." How's that? Jack believes that it was done by Ray Allen in conjunction with the label. Something similar happened to The Moment I Saw You, which features a mysterious harmonica that wasn't part of the

In any event, the 45 did extremely well throughout the region as before, hitting the top spot on most of the local charts. While Bill says that it sold as strongly as the first 45 locally, Jim Hilditch thinks it sold even more; but no one's really sure. "There was so much about the business dealings that I was not privy to or wouldn't have understood if I was," explains Bill, "You have to remember that this whole thing started as a group of young guys just looking for fun and girls. All that arcane stuff and minutiae I never paid real attention to. It might have gotten in the way of my good time!"

This time, the influential Laurie label picked up the single for national release. Unluckily, it only managed to reach "bubbling under" status. Bill believes that Laurie didn't put much promotional effort into the release.
"I think their attitude was 'it's a regional hit, let's pick it up cheap and see what happens. If it hits, it hits. If it doesn't, we're not out much. No harm, no foul'". The record's success certainly did boost the band's local reputation and bankability.

As Jim reflects, "We didn't play with any national acts until after the second record. Then we played with the Four Tops, Paul Revere & The Raiders, Neil Diamond and Question Mark & The Mysterians. We played gigs as far as Illinois, Iowa, Wisconsin and Maryland. Also TV shows in Chicago and Baltimore. Later we appeared on Upbeat in Cleveland, a nationally broadcasted show."

There was talk about doing another single for Laurie Records, but by then it seemed the band had pretty much run its course. Bill puts it this way: "The less serious of us wanted to chuck it in and go off to college. I was pretty hardcore and wanted to keep going. Anyway, the band kinda faded away in late '67, early '68". Jim agrees. "At one point we simply let it go. I wanted to have people remember the band the way it had been, instead of trying to keep it going with different players. There was a certain chemistry with all the guys in the Fifth Order. We clicked; we had our own style and sound. By changing one person, that would have changed the band."

In 1968 Counterpart Records came out with a third, now very rare and virtually unknown 45 of two earlier recordings: I Was A Fool b/w The Moment I Saw You. This happened after the Fifth Order had already split and without anybody's knowledge. Very few copies were pressed. And like the band, they quietly disappeared.

The ex-members went their separate ways. Billy and Jeff Fenholt were the only ones to continue in the rock business as musicians. Due to serious vocal chord problems that didn't clear up, Billy returned to the drums. He moved to California where he played in a number of rock bands until the '80s. Today he lives with his family in Los Angeles. Jeff Fenholt moved to Broadway and performed in the title role in Jesus Christ Superstar; he subsequently joined a later incarnation of Black Sabbath.

Today he runs a Christian TV show on TBS. Jim Hilditch went to college and returned to the music business as a manufacturers' representative, first for Gibson Guitar Co., then for Akai Musical Instruments. He's currently with the Fender Guitar Co. The traces of all other members are lost in the ether. But the Fifth Order were never entirely forgotten, and today we celebrate them for their brilliant songs and superb performances - gathered together for the first time! 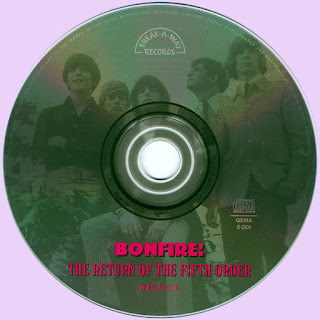 Free Text
the Free Text
Posted by Marios at 8:21 AM 9 comments: