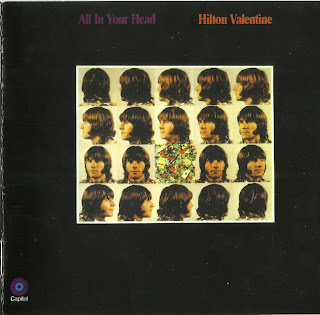 Hilton Valentine really got his start playing lead guitar with the Animals. Those were the old raving days, when Scotch and hit records and chicks and shiny limos and riots made up most of an Animal's life. "House of the Rising Sun" days - and nights.  There was even a time when Hilton got sacks of fan mail while the Burdon Himself wistfully shrugged and waited for a card from his Mum. Hilton never did anything on stage, lie just stood and played and maybe grinned. The letters and the girls rolled in. Obviously another pretty face. Everyone loves Mr. Valentine. Very sweet. He kisses the ladies' hands. Can you stand much more? The poor geezer's not to blame. A Taurus/Gemini cusper, Hilton exudes charm and gentleness. The Taurus comes out after 10. He is still a dedicated looner. Even after years of Eric Burdon shows, he makes a special trip to see his friend onstage, shouts, "Too much!" and laughs all over everybody's drinks. Fortunately, he is more Gemini. Hilton's music and message are airy, yet apt. The stuff you think of, hut nearly always keep to yourself. Things of youth and life and truth and beauty. If it is a wee mite naive it is also optimistic.
Original Notes by Debbi Smith (Strobe Magazine)

Somehow, though, Hilton Valentine's 1969 solo effort, the psychedelic folk-flavoured All In Your Head, seems to have slipped through the net, having eluded even the nefarious attentions of those individuals who can't stumble across a collectable album without bootlegging it. As guitarist with the Animals, Hilton had had a seismic effect on both the British and American music scenes of the mid-Sixties, from his iconic arpeggio intro to 'House Of The Rising Sun' to the clanging Rickenbacker chords that had shaped such classics as 'It's My Life' and 'We've Gotta Get Out Of This Place'.

But by the time that the original Animals went their separate ways in the summer of 1966, Hilton was marinated in the acid experience, and he was still attempting to get out of the drug's clutches when, in 1969, he was given the opportunity to fly to California to record a solo album for Capitol Records.

A fascinating collection of wide-eyed, flowerchild- of-the-universe songs delivered in endearingly ramshackle fashion (though it should be noted that Hilton has subsequently disowned the album, unhappy with the baroque arrangements that were grafted onto his original, largely acoustic recordings), All In Your Head had a similar sense of melody and the same naive, childlike whimsy as similar-vintage recordings by Donovan. Unfortunately, a worsening of relations between Capitol and the Animals' management meant that, in addition to only being issued in America and Canada, All In Your Head was given little or no promotion.

Forty years later, even some hardcore Animals fanatics remain unaware of its existence. Hopefully this first-ever reissue, which represents the first time that All In Your Head has been made unavailable outside of North America, will bring a little-known but thoroughly charming album from one of the era's key musicians to wider attention.

As he had been for the last three years or so, Hilton was firmly under the influence of Donovan, so it's no surprise that All In Your Head followed the Celtic Bard's late Sixties template: latter-day nursery rhymes with a strong peace'n'love hippie ethos, fey vocals that reflected the childlike lyrics, strummed guitars, baroque orchestration and a general late Sixties psychedelic folk vibe. Two of the songs had already seen the light of day more than a couple of years earlier, 'Run Run Run' having been recorded by Keith Shields, and the near-title track 'It's All In Your Head' by Natasha Pyne. Nevertheless, they fitted in perfectly with more recent material like 'Girl From Allemagne', a lilting, charming love song that Hilton recently recalled he'd written when "I was tripping at a friend's place, and I was looking at this giri across the room who was from Germany - I felt we were communicating telepathically, and I wrote a song about it."

Hilton, however, was (and still is) extremely unhappy with what he felt to be unsuitable or overpowering arrangements, recently claiming that the production "had lost the plot of what I was trying to do". To be honest, he does have a point. Some of Vic Briggs' arrangements are perhaps obtrusively florid; 'Run Run Run', for example, is punctuated by some ridiculous didgeridoo-style interjections, the charming simplicity of 'Is There Anything But Love' is compromised by the horns arrangement, and 'Little Soldiers' bears that peculiar late Sixties weakness for vaudeville backdrops.

Nevertheless, there are occasions when the instrumentation matches the song perfectly, and the bulk of the album is a triumph. Hilton's homespun, Age of Aquarius philosophising blends with a strong sense of melody and his pleasingly wistful vocals on a handful of wide-eyed paeans to Mother Nature, including 'Listen', 'Sitting In The Sun' and the drowsy, hypnotic 'Peace', with its "peace be with you my friend" refrain and general Byrds-like air. The laconic 'It's All In Your Head' has a gently rolling, Dylanish charm that transcends the rather unsympathetic arrangement, but perhaps the strongest track is the gorgeous 'Everything Returns To Me', a fragile beauty that's so catchy that it really should have been issued as a single.

Sadly, Capitol chose not to release a single, and All In Your Head didn't make too much of an impression. Hilton claims this was due to Burdon leaving Deverich's management ("everything fell to pieces when Eric left Kevin"), and it may well be the case that Capitol's dwindling relationship with the Animals' camp played its part. Vic Briggs was sacked by Capitol in December 1969, having acted as producer on no less than three former Animals' solo albums (All In Your Head, Danny McCulloch's Wings Of A Man and Zoot Money's Welcome To My Head} as well as former Music Machine lead singer Sean Bonniwell's Close and Mark Eric's highly regarded A Midsummer Day's Dream (the latter as arranger only).

Whatever the reason for All In Your Head disappearing into the ether, it left Hilton very much a stranger in a strange land. Burdon once again helped out, employing him as a roadie for the duration of Eric's two-year liaison with the band War. "LA was perfect for me at the time", Hilton subsequently admitted. "It was the flower-power thing. I was even chanting 'Hare Krishna' for a while. Thank God I'm not still doing that. I couldn't handle the yellow robes..."

When the Burdon/War gig ended, Hilton signed on the dole. Meanwhile, he was playing in a CSNY-style soft rock band called  Oojakapiv, who signed a one-album deal with a local record company, only for the advance to mysteriously disappear. With no money coming in, he accepted an offer to become manager of the Theatre Restaurant in LA. By the time that the original Animals reconvened in late 1975 to make the wittily-titled album Before We Were So Rudely Interrupted (not released until August 1977 due to legal difficulties involving Burdon's former managers), Hilton had been a Buddhist for two or three years. "In retrospect, I'd always been trying to escape from my life until then -trying to transcend to somewhere else", he told Andy Blackford in 1986. "When I started to practice Buddhism, I began to realize that this is where it's all at. There isn't anywhere else, other than in your daily life."

Hilton returned to England in 1977, working for Chas Chandler for a year or so before moving back to his native North Shields in 1980. Further musical endeavors followed. On the back of a 1982 reissue of The House Of The Rising Sun' that peaked at No. 11 in the UK singles chart, the Animals came together once more to record an album of new material, Ark, as well as embarking on an extensive worldwide tour which resulted in the LP Greatest Hits Live!

When the Animals once again found they were unable to tolerate each others' presence on a permanent basis, Hilton reformed his pre-Animals band, the Wildcats, before joining forces with John Steel and Dave Rowberry (who'd been Alan Price's replacement back in 1965) in Animals II. He then returned to America, settling down in Connecticut, where he began to concentrate on acoustic music. Using the pseudonym Skiffledog, in 2004 he released a new CD entitled It's Folk 7V Skiffle, Mate!, which included stripped-down revamps of two All In Your Head songs, 'Peace' and 'Run Run Run1. Having toured extensively with Eric Burdon, he has recently recorded with fellow Sixties survivor, Yardbirds drummer Jim McCarty.

Forty years after the subterranean release of his first solo album, Hilton still claims that he'd rather forget all about it. That's the artist's prerogative, of course, but there's nothing about the charming period-piece All In Your Head that should embarrass him - apart, maybe, from the groovy, astrologically-inclined original sleeve note from the editor of Strobe magazine, one Debbi Smith. But such is life. Here, then, is All In Your Head in all its beautiful, gentle, enigmatic, late Sixties acid casualty glory...
by David Wells August 2009 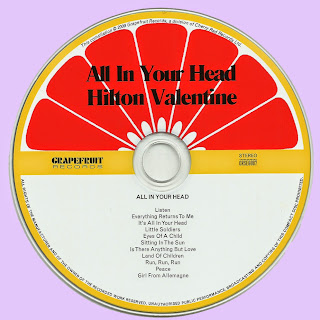 Free Text
Text Host
Posted by Marios at 4:52 AM 10 comments: