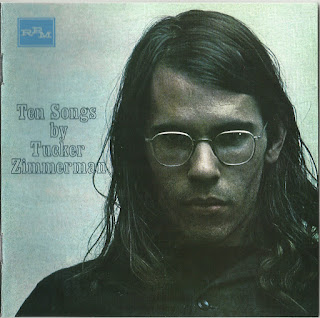 Zimmerman’s collection of self-penned, forceful folk-rock was produced by Bowie’s frequent collaborator Tony Visconti, who also played on the album.  But the superstar artist’s connections to Zimmerman didn’t end there.  The future Spiders from Mars – then known as Ronno after lead guitarist Mick Ronson – released Zimmerman’s “Fourth Hour of My Sleep” on a Visconti-produced single.  And Zimmerman had actually played Bowie’s Beckenham Arts Lab, jokingly billed as cousin to Robert Zimmerman, a.k.a. Bob Dylan!  (All kidding aside, Bob’s influence on Tucker can be detected in the harmonica and guitar work throughout the album.)

Zimmerman came to Britain from America in 1968 with a degree in music theory and composition under his belt as well as a songwriting credit on a Butterfield Blues Band album.  Gigging throughout Europe under various names, he attracted the attention of EMI’s Regal Zonophone imprint.  Regal Zonophone paired him with Visconti, who had been producing for the label, and the pair recorded a reported 80 demos.  A single was initially released, “The Red Wind,” featuring Zimmerman supported by future Beach Boy Ricky Fataar on drums, Visconti on bass and Rick Wakeman, later of Yes, on organ and piano.  Though the single didn’t make waves, the label proceeded with an album.  Wakeman and Visconti joined another impressive cast of musicians including drummer Aynsley Dunbar and guitarist/sitar player Shawn Phillips for Ten Songs.

The atmospheric, haunting and edgy folk-rock of Ten Songs, like “The Red Wind,” failed to catch on with the public.  Tucker Zimmerman would make five more albums through 1983 even as Ten Songs gained collectable cachet.  RPM’s reissue adds seven bonus tracks including the mono and stereo versions of “The Red Wind,” non-album B-side “Moondog,” and four previously unreleased recordings from the period.  Kieron Tyler has provided the excellent new liner notes and Simon Murphy has remastered from Rob Keyloch’s transfers from the original analogue tapes.
by Joe Marchese 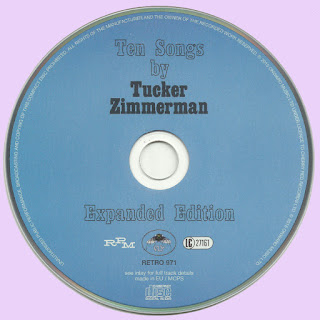 Free Text
the Free Text
Posted by Marios at 4:00 AM 5 comments: