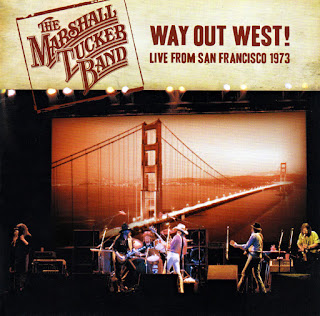 Of all the band's on Phil Walden's Capricorn label during the heyday of Southern rock in the 1970s, The Marshall Tucker Band came closest to The Allman Brothers in its ability to write memorable material and improvise with a real sense of adventure. Way Out West: Live in San Francisco 1973, forcefully illustrates the band's virtues.

MTB distinguished itself even further from its forebears by its eclectic mix of influences. Blues was no more or less important than country music, as evinced in the opening "Hillbilly Band," or traditional jazz, motifs of which become most apparent when Jerry Eubanks is playing flute or saxophone, as he does on "24 Hours at a Time." Vocalist/songwriter Toy Caldwell's lead guitar style mixed all those elements when he takes the spotlight as on "Every Day I Have the Blues" or when the group jams as a unit.

And it's these latter moments, here best exemplified by the way the sextet stretches out on "Take the Highway" and "Can't You See," that Marshall Tucker truly excels. Granted the group's interplay isn't as sophisticated as The Allmans—holding, as it does, too closely to chord change repetition—but its grasp of dynamics, grounded in the splendid rhythm section comprised of drummer Paul Riddle and bassist Tommy Caldwell (sibling of Toy), is impeccable. And the drive of MTB's collective motion never flags, thanks as well to George McCorkle's insistent rhythm guitar work.

As demonstrated on "Another Cruel Love," vocalist Doug Gray's voice is as much an attraction in the MTB sound as the songs and the jams. He not only adds a gospel element to this heady mix, as on "Ramblin,'" but his full-throated singing is no mere precursor or mere afterthought to the improvisational interludes; instead, it's a bona fide attention-getter on its own terms.

Recorded at famed rock impresario Bill Graham's Winterland, Way Out West was compiled and produced by Gray, who leads a realigned ensemble under the Marshall Tucker name today. It contains the bulk of MTB's debut album plus the highlights of the second album, A New Life (Capricorn, 1974), yet to be released at the time of this concert and, bereft of the sometimes superfluous production touches, presenting the group with an aggressive edge in its playing that's missing from its more relaxed studio work. The sleek sound production features just enough definition to highlight the distinctive instrumental lineup individually and collectively.

The Marshall Tucker Band never descended into the generic Dixie rock, even later in its career after the death of bassist Caldwell, when its approach became more conventionally structured. Live in San Francisco 1973 is a brilliant document of the group's glory days that will gratify fans and may even alter the preconceptions about Southern rock for those not inclined to hear the genre with open ears.
by Doug Collette 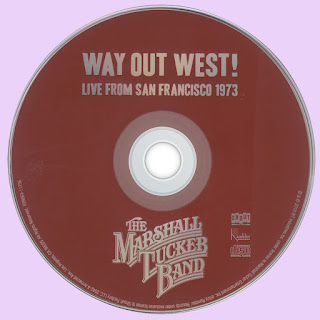 Free Text
Text Host
Posted by Marios at 10:28 AM 7 comments: