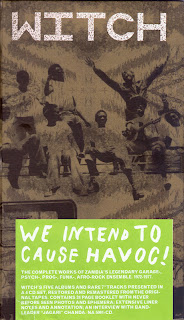 A pioneering group from the nation of Zambia, Witch (the name was an acronym, standing for We Intend To Cause Havoc) were one of the defining acts of Zamrock, a fusion of Western rock and rhythm & blues with traditional African sounds; they were among Zambia's most popular and influential bands in the 1970s as a wave of psychedelic and hard rock gained an audience in Africa.

A landlocked nation in the South of Africa, Zambia was formerly Northern Rhodesia until gaining its independence in 1964, and as Zambia established its own national identity, local musicians began embracing the progressive influences of artists such as the Beatles, the Rolling Stones, and Jimi Hendrix, as well as the forward-thinking soul and funk sounds of James Brown.

By the mid-'70s, Zambia was falling into political chaos as the nation's once profitable mining industry ran dry, and many Zamrock bands reflected this with a darker, more psychedelic-influenced sound that suggested a familiarity with the likes of Deep Purple and Grand Funk Railroad.

Witch included vocalist Emanyeo "Jagari" Chanda, guitarists Chris Mbewe and John Muma, bassist Gedeon Mulenga, and drummer Boidi Sinkala, who were veterans of Zambian cover bands of the late '60s; Chanda (whose nickname "Jagari" came from his fascination with Mick Jagger, one of his strongest influences) had worked with the Red Balloons and the Boyfriends (the latter group would evolve into another key Zamrock outfit, Peace), while most of the other members were members of Kingston Market. In 1971, Chanda sang with Kingston Market at a school function, and he was soon invited to join the group; they soon changed their name to the Mighty Witch, and then simply Witch, using the acronym they'd coined as explanation. Fueled by marijuana and Western rock and soul, the group's debut album, Introduction, was released in 1972, and was among the first commercially released LPs issued in Zambia.

Witch's third album, 1975's Lazy Bones!!, is generally regarded as their finest work; while they were hampered by the primitive recording technology available in Africa, they developed a large following in Zambia and were playing stadium-sized shows throughout the continent.

After Witch toured as an opening act for Osibisa, the U.K.-based Afro-rock band, they began including more local influences on their final two albums, Lukombo Vibes and Including Janet (Single), but in 1977 the group began to splinter when Chanda left the band to return to school and become a teacher, and the rise of disco and loss of venues for live music did the rest.

Chanda also became a born-again Christian, which he cites as one of the reason he avoided the fate that befell his bandmates; as the AIDS epidemic swept through Africa, the Zambian musical community was hit especially hard, and like most key Zamrock musicians of the 1970s, Mbewe, Muma, Mulenga, and Sinkala all succumbed to the disease.

In the 21st century, crate diggers interested in idiosyncratic rock sounds from around the world rediscovered Witch, and the German reissue label Shadoks brought out new CD editions of Introduction and Lazy Bones!! In 2012 the American label Now Again Records released a comprehensive Witch box set that featured their five studio albums plus a bonus collection of single tracks and unreleased material.
by Mark Deming

Witch's five albums and rare 7" tracks presented as a 4CD box set, restored and remastered from the original tapes. Contains a twenty-four page booklet with never before seen photos and ephemera; extensive liner notes and annotation; an interview with bandleader 'Jagari' Chanda. By the mid 1970s, the Southern African nation known as the Republic of Zambia had fallen on hard times: self-imposed, single party rule; a decline in prices for the country's largest natural resource, copper; conflict in other countries on Zambia's borders.

This is the environment in which the Zamrock scene that flourished throughout that decade emerged... fuzz guitars were commonplace, driving rhythms as influenced by James Brown's funk as Jimi Hendrix's rock predominated, musical themes were often bleak and bands largely sang in the country's constitutional language, English. Although Witch is the best known Zamrock ensemble and although they succeeded in releasing five albums in Zamrock's golden years -- they never made an impact on the global scale in, say, the way afro-beat maestro Fela Kuti did. Travel to and within Zambia is expensive, and the markers for the Zamrock scene are now few.

Only a small number of the original Zamrock godfathers survived the AIDS epidemic that decimated this country. Witch's musical arc is contained to a five year span: The band's first two, self-produced albums, released in unison with the birth of the commercial Zambian recording industry, are exuberant experiments in garage rock, and are as influenced by the Rolling Stones as they are James Brown; their third albun, Lazy Bones!! is the band's masterpiece, a dark, brooding psychedelic opus that makes equal use of wah-wah and fuzz guitars, that relies as heavily on the stomping feel of hard rock as it does the syncopation of funk; the band's last two albums, recorded after the band toured with Osibisa, make use of traditional Zambian rhythms and folk melodies and are the most 'afro-rock'of Witch's oeuvre." 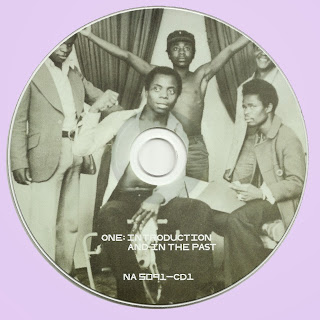 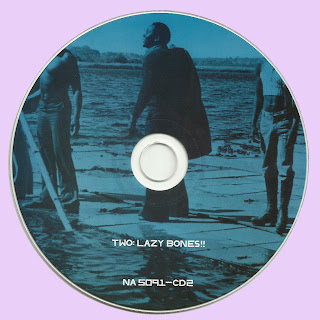 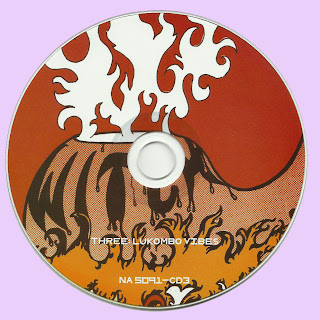 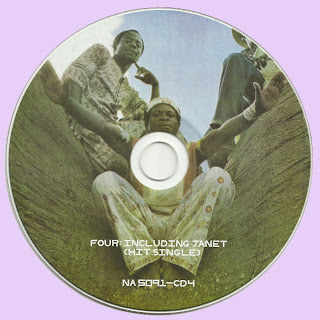