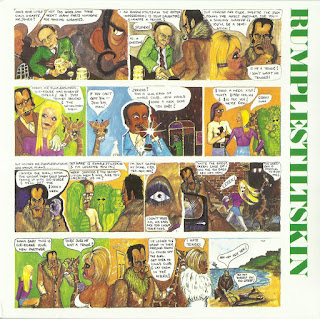 An abiding childhood memory for many people around the world is the strange story of Rumplestiltskin. Who was this creature and what possible connection could he have with the world of music? Well, Rumplestiltskin was a passionate, deformed dwarf of German folklore. Remember the miller's daughter, ordered by the King to spin straw into gold? The dwarf offered to achieve this miracle on her behalf, as long as she promised to give him her first child. The maiden married the king and grieved so much when their child was born, that the dwarf promised to relent if she could guess his name. A servant tipped off the maiden and when the child was saved, Rumplestiltskin killed himself in a fit of demented rage.

But whence came the mysterious group that adopted this curious name? Did they yearn to spin their records into pure gold? It's most likely they had this firmly in mind. After all, 'Rumplestiltskin' was the idea of a successful record producer, and those who would do his bidding were all top British session players. Alas, their golden schemes came to nought, but at least they produced a splendid album that has since gone into rock folklore.

Shel Talmy was an American born producer resident in London during the Swinging Sixties. Talmy was closely involved with The Who, The Kinks, The Easvbeats and many other top groups. As a busy producer, he appreciated the benefits of using session players as they could save him time and money. Groups had all the ideas, but often their guitar players and drummers were inexperienced youngsters who found it difficult to cope with studio demands.Talmy would call in reinforcements, when he needed guys who could read music and quickly grasp the arrangements.

The contributions of his anonymous session men were usually a closely puarded secret. Nevertheless, the producer grew to admire the hard working studio stalwarts and that's probably what gave Shel the idea forming a new kind of'super group'. It would give the professional musicians a chance to shine in their own right. Except that, like the mythical prototype, their names could only be revealed by guesswork. Once again, 'Rumplestiltskin' became the centre of a spinning web of intrigue.

The musicians chosen for the enterprise were all top line players. The line up comprised Peter Charles Green (Vocals), Alan Parker (Guitar), Alan Hawkshaw (Keyboards), Herbie Flowers (Bass) And Clem Cattini (Drums). "We all had a great laugh in the studio," recalls Clem Cattini, recalling the events of some 36 years ago. "We were all session men, but the idea was to form our own supergroup. It was Shel's idea to call it Rumplestiltskin and we all played under assumed names, because the BBC wouldn't play our record if they thought it was by session men. So I went under the name of 'Rupert Baer'."

Peter Charles Green was actually Peter Lee Stirling, a singer/songwriter who subsequently enjoyed an international hit single under the name of 'Daniel Boone' with 'Beautiful Sunday' in 1972. He had previously sung in the group Hungry Wolf, that also featured Clem Cattini, Herbie Flowers, Alan Hawkshaw and Alan Parker, and recorded an album for Philips in 1970. Alan Parker as one of the top session guitarists of the day who played the solos on records by all sorts of artists, from Status Quo to David Bowie. Says Clem: "Alan Parker and I worked with Lulu as her backing band at 'The Talk Of The Town' in the West End, with John Paul Jones on bass and Nicky Hopkins on piano. Alan Hawkshaw wrote loads ofTV material, including the theme for Channel 4's 'Countdown'. Herbie Flowers used to play with John Williams in a group called Sky.

He also wrote 'Grandad', a big hit for Clive Dunn." Clem believes that Shel Talmy brought them together to see if they could compete with the heavy rock groups like Led Zeppelin and Status Quo. "We did a  helluva lot of work with Shel and he wanted to get this supergroup going, without being facetious. He had a lot of faith in us. But we never got a hit, and this was the only record we made. We recorded the album at Pye and did one 'live' gig at the Marquee Club in Soho. It was a great band and Alan Parker was a superb guitar player. He played on Donovan's big hit 'Hurdy Gurdy Man' and so did I.You read that it was Jimmy Page, John Paul Jones and John Bonham on the record, but that's completely wrong. The  trouble was, nobody knew who we were. But I was one of the original rock'n'rollers." Clement Cattini was born in Stoke Newington, London August 20, 1937. His father emigrated to England from Italy in the early 1900s and began a career in the restaurant trade. Thanks to flat feet, Clem escaped National Service with the Army, the fate of most British teenagers in the 1950s. He was able to enjoy life as a rock'n'roller and became was one of the U.K.'s first professional pop and rock drummers.

He started playing aged 18 and joined Terry Kennedy's Rock'n'Rollers. They had the extraordinary experience of touring with legendary British comedian Max Wall in 1957. "Max was doing a Bill Haley skit in his show and we had to back him," recalls Clem. "He was a fabulous guy and so funny. I used to watch him every night." After touring with Max, the band backed pop idol Terry Dene and were known as the Dene Aces. They appeared in Terry's movie 'The Golden Disc'. Clem: "I was in the film as a smiling youth. I get ribbed quite a lot about that when it's shown on TV. But I'm so glad I was involved in that era."

After playing for Terry Dene, Clem worked on the Larry Parnes package shows, backing Billy Fury, Duffy Power and Johnny Gentle. He then joined Johnnv Kidd and the Pirates who had a Number One hit in 1960 with 'Shaking All Over'. "I'd had a enough working for £20 a week for Larry Parnes, so I left him and got the job with Johnny Kidd. We recorded 'Shakin' All Over', which was my first Number One. The guy who played the guitar solo on the record was Joe Moretti. He used to lidiiy diuund the 2I's Coffee Dai in Soho. Our regular guittiiist was too nervous to do a solo, so we asked Joe if fancied making a record — as you do. Joe now lives in South Africa. Just before he died, George Harrison told me at a party that 'Shakin' All Over' was one of his favourite records, and he was surprised when I told him who had actually played the famous solo." Clem left the Pirates when Johnny Kidd's touring schedule dried up and answered an advert to join a session group put together by producer Joe Meek.

The group turned out to be The Tornados who promptly had a Number One hit in America in 1960 with the instrumental 'Telstar'. Despite his success with The Tornados and The Honeycombs, Joe Meek suffered from personal and business worries, and on February 3, 1967, Meek took out a shotgun and killed his landlady, before turning the gun on himself. Once he had recovered from this shocking tragedy, Clem went back to work and joined successful vocal group The Ivy League that led to endless 'demos' sessions for different acts. "That's how I got into session work and ended up playing on the master discs. I was lucky because I was one of the few session men who could play rock'n'roll."

During a career lasting 23 years, Clem played on 43 Number Ones, including Tony Christie's '(Is This The Way) To Amarillo', the smash hit so successfully revived in 2005. Cattini still plays 'live' gigs with a revived version of The Tornados. In 2006 the group was looking forward to playing on a special show to commemorate the 40th anniversary of Joe Meek's death, in February 2007, also due to include John Leyton, Cliff Bennett and The Honeycombs. But the big question remains — could Rumplestiltskin have made it as a successful supergroup? Says Clem: "Quite possibly, because the band had some great musicians. Who knows? I might got have finally got my swimming pool!"
by Chris Welch, London, England, February 2007 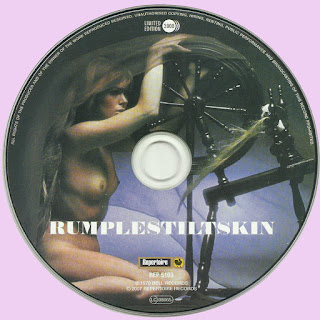