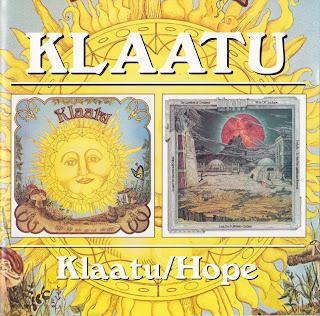 Those who appreciate the smart pop, art/symphonic-rock, and weird sci-fi themes of Klaatu needn't venture beyond this two-on-one issue of their first two Capitol releases. Klaatu frequently alternated between Beatlesque pop, the showy guitar rock and vocal theatrics of early Queen, and the electronic orchestral techniques pioneered by Walter Carlos, or worked all three into the structure of a four- or five-minute song.

They reached their creative peak on their second album Hope, which implemented all of the above in a very creative and effective manner but was predictably dismissed by the music press as being "over-indulgent" and "pretentious" -- and this only after it was ascertained that Klaatu was not the alias for the second coming of the Beatles. Their subsequent releases were downright ghastly pop-rock affairs that lacked originality and made their early-'80s demise a welcome occurrence. The Korean issue lacks liner notes and credit details, but for those who are curious about the Canadian band, this compilation presents Klaatu in their finest hour.
by Dave Sleger 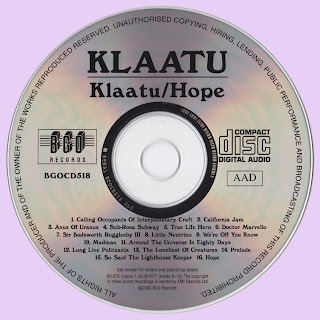 Free Text
Text Host
Posted by Marios at 7:44 AM 9 comments: