Senor Soul - What It Is, Y'All (1967-70 us, excellent latin soul psychedelic funky garage beats) 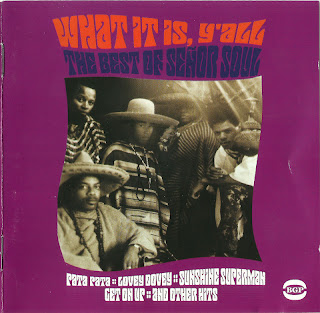 Most fans' first taste of War was with their 1970 collaboration with ex-Animal Eric Burdon, 'Spill the Wine'. But these long-lived denizens of Los Angeles multi-racial funk and soul have their brotherly roots in a hip instrumental combo by the name of Senor Soul. Decked out in ponchos and sombreros, the Senors' label promoted the band with a superficial novelty image, but the sounds they produced were anything but novelty: a hip synthesis of Latin-flavoured jazz and dead-on-the-one psychedelic funk.

The man in charge of Senor Soul throughout their brief two-year career was Chuck Miller, a Kansas native and multi-talented horn and keyboard player who had been performing as far back as 1962 in the Creators, a suburban Long Beach, California band that actually included the core members of the future War: Howard Scott on guitar. Lonnie Jordan on organ, Morris "BB" Dickerson on bass, and Howard Brown on drums. The Creators broke up when Scott was drafted, but Miller continued to play in other outfits.

The way their bio tells it. Senor Soul was formed by Miller in early 1967, though they were probably first known as the Romeos, under which name they made two singles for Warner Brothers' R&B subsidiary Loma in 1967 judging by titles like 'Mucho Soul' and 'Calypso Chili', the outfit already had a Latin soul shtick down. By that time Miller's cohorts were guitarist Howard Talley, Edwin Stevenson on vibes and piano, bassist Willie Briggs, and James Tillman Crump on drums.

Later in 1967 the group signed to happening LA indie Double Shot Label co-owner Hal Winn recalls that Chuck Miller had come into the company's Sunset Boulevard office touting the band, but it is also possible that Winn knew of the Romeos already, as he had produced the Invincibles for Loma. 'There was always a great feeling when you could deal with somebody like Chuck," notes Winn, "someone who was in control of his own group. Because if not, it was like five arguments instead of one. He directed everything. Later on it wasn't that way, and he eventually lost control of the band when they became War."

Senor Soul's first record was an infectious vibes and flute-filled take of Miriam Makeba's 'Pata Pata' that immediately received airplay, thanks to the experienced efforts of Double Shot's Irwin Zucker, famous for his Promotion In Motion publicity stamp.'"Pata Pata' sold pretty well in some parts of the country," recalls Zucker "Basically it was not a hit record but it sold about 30,000 copies just in a place like Detroit."

The group made their official live debut in January 1968. And that same month completed an album."Plays Funky Favorites". Cut live at Sunset Sound Studios, the record featured jazzy interpretations of recent chart hits such as 'Get On Up', 'Spooky', 'Sunshine Superman', 'l Heard It Through The  Grapevine' and 'Uptight', all laden with chugging guitar, sparkling vibes and the occasional vocal aside grunted in a charming ersatz Chicano.

Producers Winn and Joe Hooven made sure the Senors also covered a handful of Double Shot copyrights including Brenton Wood's 'Lovey Dovey Kinda Lovin" and Count Five's 'Psychotic Reaction', the latter transformed into a whacked-out acid jazz masterpiece. Miller contributed two originals, one of which. 'Poquito Soul', would later be successfully covered by One G Plus Three in 1972. Senor Soul quickly became a popular live draw in the Los Angeles area, appealing to both the Hispanic community of East LA, and general R&B clubgoers from Ventura to San Diego.

There were two further singles on Double Shot during 1968, including a version of the novelty Tip Toe Through The Tulips', before Winn and Hooven moved the group to the label's new subsidiary Whiz in early 1969. However, it appears that the combo had suffered a personnel change, with only Miller remaining from the original line-up.

The first Whiz single was a strong take on the oft-covered 'It's Your Thing' that eschewed the vibes and flute of the old Seniors for a basic, Hammond-dominated funk feel. It's uncertain who exactly was on the session but it was supervised by Maurice Rodgers, organ player for Double Shot outfit Kent and the Candidates, and subsequently the label's principal A and R staffer. The single got action on R and B charts around the nation but once again fell short of becoming a hit.

A second album named for the single was prepared in June 1969, and offered further evidence that the original Senor Soul was in disarray. Some cuts were outtakes from the first LP sessions, while others were actually recycled backing tracks from other Double Shot/Whiz releases. Specifically, 'Hypnotizer' had originally been released with a vocal as 'Mesmeriser' by the Fantastics, while'Make The Funk Jump' used the same track as the Recitations' vocal version on Whiz, which itself had cannibalized an earlier Kent & the Candidates single The Neck'.

But nevertheless, "It's Your Thing" was as listenable as its predecessor and it has since become a highly regarded item amongst funk connoisseurs, not least for The Mouse1, two and half minutes of pounding fatback groove penned by Kodgers, and issued as a single in July 1969. From the same session comes an equally appealing outtake. The Sneak', featuring a spiraling, spluttering organ and a splash of wah-wah. When quizzed on the status of the band at this point, Hal Winn offers the following observation:"! don't remember a split, but they were becoming War while we still had them." What seems probable is that Miller reconnected with his old cohorts from the Creators around this period.

The standard history of War mentions their evolution from a rand called the Nightshift that Eric Burdon ran across in a Long Beach club called the Rag Doll in the summer of 1969.The combo were providing accompaniment to ex-football player Deacon Jones, who had a novelty act that consisted of doing one-arm push ups while singing R & B ballads. They may have been working live with Jones as the Nightshift, but on vinyl at least the group were still Senor Soul.

Burden's epiphany at discovering the band coincided with his formation of Far Out Productions with Jerry Goldstein, who was quick to contact Winn about taking over the group's contract But interestingly enough, the final session that the band recorded for Double Shot was in February 1970, some time later. It produced two vocal tracks that are unmistakably War in everything but name, with a communal writing credit that confirmed the line-up: Miller, Dickerson, Brown, Scott, Jordan and newcomer Lee Oscar, introduced to the band by Burdon.

The latter's plaintive harmonica is to the fore on both the ballad 'I Ain't Got No Soul Today (What It Is,Y'All)' and the impossibly catchy 'Don't Lay Your Funky Trip On Me', solid tunes chat could slot effortlessly onto "All Day Music". War's two year hence debut. The tracks became the Senors' last two A-sides, and 'I Ain't Got No Soul Today' in particular got decent airplay. But they were overshadowed, however, by 'Spill The Wine’  #3 chart placing in July 1970, which made the newly christened War, with the addition of Papa Dee Allen on keyboards, national stars.

In the years since, the group have rarely referred to their roots in Senor Soul, but there is no doubt the band had much to do with informing War's complex and unique blend of funk, R & B, rock and Latin jazz. And the Senors made some great records on their own right.
by Alec Palao 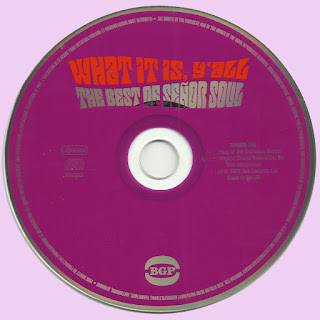 Free Text
Text Host
Posted by Marios at 6:32 AM 12 comments: