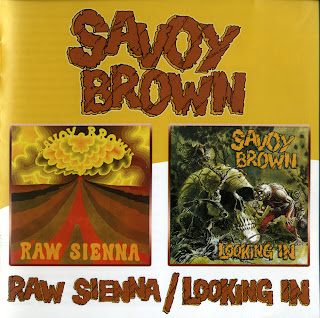 The "Raw Sienna" a high-water mark by the band, finds them softening their rougher edges and stretching out into jazz territory, yet still retaining a blues foundation. There's not a bad cut here, with enough variety (bottleneck slide, acoustic guitar, horns, and strings) to warrant frequent late-night listenings. "A Hard Way to Go," "Needle and Spoon," and "Stay While the Night Is Young" are especially strong, as are two instrumental numbers.

Unfortunately, leader Kim Simmonds lost his greatest asset when vocalist Chris Youlden quit for an ill-fated solo career after this recording. Youlden had one of the most distinctive voices in British blues, and Savoy would never fully recover from his exit.
by Peter Kurtz

Savoy Brown's blues-rock sound takes on a much more defined feel on 1970's Looking In and is one of this band's best efforts. Kim Simmonds is utterly bewildering on guitar, while Lonesome Dave Peverett does a fine job taking over lead singing duties from Chris Youlden who left halfway through the year. But it's the captivating arrangements and alluring ease of the music that makes this a superb listen.

Even the Yardbirds-flavored "Leaving Again" is appealing with its naive hooks, capped off with a heart-stopping guitar solo. This album along with Street Corner Talking best exemplify Savoy Brown's tranquilizing style.
by Mike DeGagne 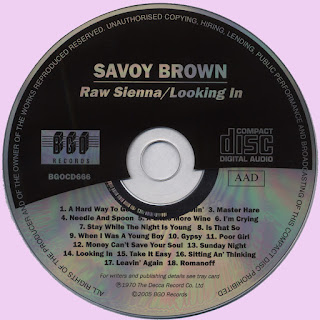 Free Text
the Free Text
Posted by Marios at 8:01 AM 10 comments: