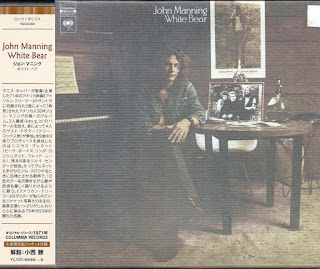 An album called White Bear has my undivided attention by virtue of its name alone. But when its cover also shows a lanky long-haired fellow sitting next to a piano in some kind of antique room, I’m sold. White Bear was released on Columbia in 1971, and is the first and only outing of John Manning, a 12-stringed balladeer who sailed the currents of the great 1960s folk wave, before it broke on the shores of the ’70s.

I’d like to proceed by giving more background on the artist, such as where John Manning hailed from and how he came to record his first album. Problem is, no one seems to know. Apparently, he opened for Deep Purple in the early 1970s. John Manning also shared the bill with Iron Butterfly and Black Oak Arkansas, and performed in the legendary Troubadour club.

For the rest, there’s about four short reviews available online, one of them in German, as well as a one-sentence review in The Milwaukee Journal of October 6, 1971, describing John Manning as a “sad, restless, romantic balladeer.” Finally, two of his songs were featured on the soundtrack of a Dennis Hopper documentary called The American Dreamer, also in 1971.

The dearth of information wouldn’t be so baffling if the music wasn’t so good. John Manning is a first-class singer, musician and songwriter, though his lyrics tend to be on the obscure side. It’s no surprise then, that he brings up his “drug-infected mind” in “The Whole Song,” a near-perfect folk ballad that also contains the beautiful line “but my every loving thought for you, like every song I sing, is the child of a mystic dream you’ve never known.”

“Hard on the Road to New Mexico” is equally mystifying without losing out in intensity, reminding of Dylan’s great “Isis.” There’s a lover who offers the singer a “guiding moonstone” before departing. He escapes to the highway and meets a bunch of Indians. The plot thickens as Jesus joins in as well as a Prophet of the Dawn. There’s a beautiful verse about a girl in Colorado and a poignant conclusion: “And yet there is always one more question: Will there be someone still at home?” The song is a wild trip, but it’s well worth the ride.

John Manning’s “Free Clinic Song” is worth a listen too, as a poetic meditation on love and loneliness that starts with: “Who am I to hold your hand and think to know your mind?” The song is about that most basic of questions: Can we ever truly know each other? There’s an existential intensity to the singer’s probing – “sometimes in the dark you come to think you know too much” – that is reinforced in the refrain: “It’s so hard to be living here and never find out why.” Yet the singer clings to love, desperately believing in its potential: “Sometimes I imagine that I understand what’s real: If we put our hearts together, do you think they might be healed?”

As a singer, John Manning has a clear and intimate voice. He reminds of Tim Buckley at times, combining the depth of his low register with piercing trips into his higher range. In the intensity of his singing, he also brings to mind such artists as Roy Harper, Gene Clark, even Scott Walker and early Neil Young. Of course, comparisons can only bring us so far: Manning has a distinctive voice of his own, the perfect medium for his poetic and dramatic folk songs. Though I have cherry-picked only a few, there is no weak moment on the record; songs like “Mother Earth” and “Leaving Home Again,” especially, should not go unmentioned.

So this is what we have: a great album released as an LP in 1971, re-released on CD in 2002, and now available on YouTube – and an untraceable artist. Resorting to YouTube comments for more clues, we find, among pertinent observations such as “Hey, this guy has my name … AND MY HAIR,” and someone suggesting that John Manning may be still around and working on a follow-up album.

If that is indeed the case, some of the mysteries surrounding John Manning may be cleared up some time in the future. Until then, we’ll have to make do with the mysteriously beautiful folk music on the unjustly neglected White Bear.
by  Kasper Nijsen 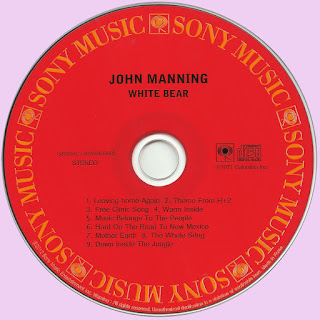