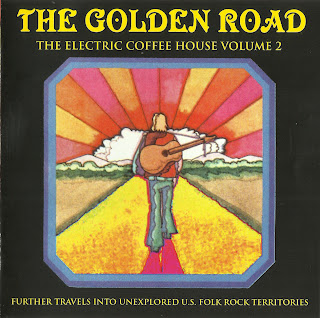 A little while back we took a journey into that time when American folk music discovered electric rock and pop. The result was The Electric Coffee House compilation. That turned out to be one of our most successful albums, so consequently we've been having another delve into that hallowed region of chiming guitars, righteous harmony and garage joy.

Once again, we're delighted to present an intriguing selection of obscurities, some primitive, some sophisticated, some Psychedelic, some full of pop sensibility, but all of it with an essential, omnipresent undercurrent of folk tradition, albeit filtered through amplifiers and pick-ups, but there none the less. You'll hear from Ian Whitcomb's kid brother, Chuck Berry's favourite backing band, the man who wrote Mr. Bojangles, a future member of Poco, a band featuring the young Bruce Cockburn, and a whole lot more besides.

Come with us along The Golden Road, let your mind wander free and let your freak flag fly.
by Nick Saloman 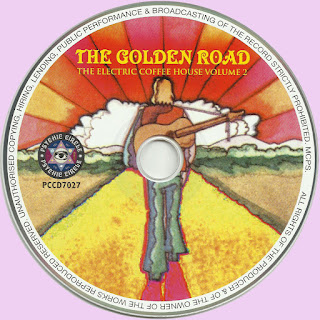 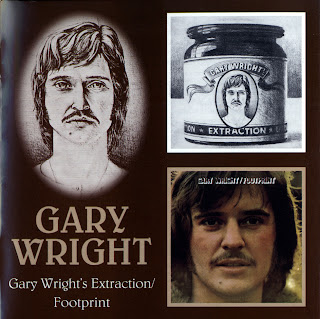 While critically acclaimed, they were not commercial successes at the time, in spite of the quality of the material. Gary Wright, former keyboardist/songwriter/vocalist for Spooky Tooth, released these two fine albums in succession after the initial breakup of the band, with `Extraction' coming out in 1971 and `Footprint' the next year. They now get a second chance, and fans of great rock music have reason to rejoice.

Wright formed a touring band in the wake of Spooky Tooth's demise, calling it `Wright's Wonderwheel' (which featured, among others, future Tooth and Foreigner guitarist Mick Jones). Most of that band played on 'Extraction', although the name Wonderwheel was not credited (however,they did release a single called 'I Know', and recorded an unreleased album). `Extraction' differed markedly from the trademark Spooky Tooth sound; the songs were generally more up-tempo, with more focus on lead guitar than the heavy organ sound of his previous band. In addition, the production was very bright and clean, with individual instruments very discreet and well separated.

It was sonically impressive on vinyl back then , and remains even more so on CD today. Featuring some truly outstanding songs such as Get on the Right Road, I Know a Place, Too Late to Cry and his own, more rocking version of The Wrong Time, which was also covered on the Wright-less Spooky Tooth Album `The Last Puff'. To me, this and `Footprint' feature Gary's most powerful vocal performances, largely devoid of the falsetto often used in Spooky Tooth recordings.

`Footprint' is a real joy to have. `Extraction' was actually released the previous year on the Repertoire label, but until this two-for set, `Footprint' was something of the Holy Grail of Spooky Tooth related material still unavailable. While `Extraction' had minimal production gloss, with somewhat sparse instrumentation and a generally `hard rock' feel, `Footprint' went a different direction.

Continuing with top-flight songs, superb vocals and lyrics that showed the emerging spiritualistic side of Gary, the recording featured many guest musicians, including George Harrison (under a pseudonym), Bobby Keys, Alan White, Jim Gordon and others. It was a more textured album in production values, with shimmering acoustic guitars augmenting the keyboards and electric instruments, more pensive lyrics and a kind of loose, thematic unity to the album not found on `Extraction'.

This theme is represented in such titles as Give Me the Good Earth, Love to Survive, Fascinating Things and the anthem-like Stand for Our Rights, which featured what may have been the last sax performance from King Curtis before his untimely death. To this day, hearing that song makes me want to jump up with a clenched fist and start marching. A more powerful affirmation to the cause of personal freedom would be hard to find.

While these masterpieces should, by all rights, have been released long before now, the fact that they are now available is great news to fans of not only Spooky Tooth and progeny, but to fans of superb late 60s, early 70s rock music everywhere. Frequent and repeated listenings guaranteed!.
by Dennis Hawley 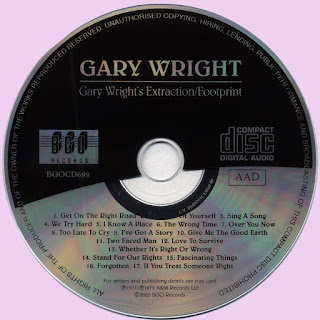 Free Text
Text Host
Posted by Marios at 5:55 AM 18 comments: