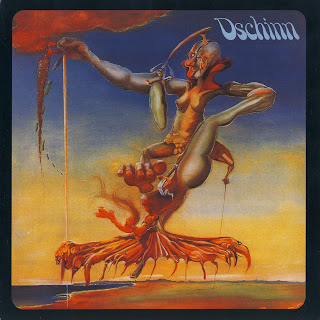 Back to the spring of 1970. Influenced by the Beatles and their musical revolution, a whole generation stepped into a new feeling and created a creed of another future. Therefore the angloamerican rock-dreams also forced a lot of creative sub-culture living and progressive sounds in Germany.

The story of  Dschinn started in the heart of Hessen/Germany, near the city of Marburg, when a bunch of creative, young musicians decided to found a rockband. The Hurricanes were born. With their own songs and explosive stage shows they were after a career in music business. By setting such a high goal they played live concerts everywhere - at clubs, universities and of course at countrywide pop-festivals.

The result of these efforts: they gained a lot of awards at up-and-coming-rock-festivals, national performances at famous beat-clubs such as the StarDust (formerly called StarClub) in Hamburg. It also was on stage, as they were discovered by an influentual businessman. In sympathy with their first producer, who just had become both their greatest fan and financial supporter the band had to change their former name into Dischas. They could soon release their first single "Here What I Say/Come Back To Me", which shot into the Austrian charts and even was placed in the Top-ten for a couple of weeks.

Despite of further singles placed in the charts and further performances on stages such as SWF Baden-Baden and Funkausstellung Berlin, the band decided to change their music style radically. Due to this decision, not only their contract had been released, but also their former group-name had become too old-fashioned., so they now called themselves Dschinn, which sounded much more sophisticated - as a symptom of those times. Of course-from now onwards the band entered the progressive musicgenre, too.

Dschinn started with a brandnew set of remarkable songs with powerful arrangements and impressive vocals. All tracks we recorded at Tonstudio Mitte Bremen. Even though recording-quality should be rated as rather poor, the nusicial output must be honoured as real Krautrock-jewls, that stood out against the efforts of some other contemporary artists in Germany. Looking for a new record-company, the Band contacted Bacillus records, a subsidary of Bellaphon, Frankfurt and sow their first and only album "Dschinn" was released 10 years after the band had been founded.

Unfortunately this little masterpiece was no big success as it disappeared in the great oversupply of music. Finally, in 1972 the rockgroup disbanded. The last musically sign of Dschinn was their track "Rock ‘n’ Roll Dschinny”, a marvelous highlight, which had been placed two years later on a Bellaphon-sampler. 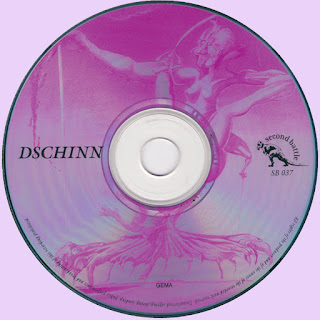 Free Text
the Free Text
Posted by Marios at 9:37 AM 5 comments: