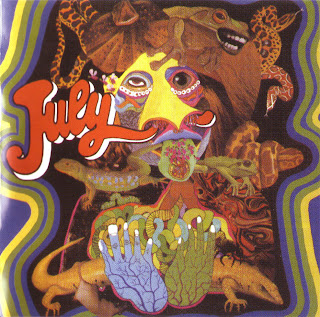 For a number of years it was thought that the Band originated from a group called The Playboys. They originated in fact as The Dreamers who played much in the style of The Shadows and The Everly Brothers. With the success of R'n'B they changed their name to The Tomcats, drinking from the Sounds of Chuck Berry and Bo Diddley. In 1965 another Band called Second Thoughts came to an end (Their Lead-Singer Patrick Campbell-Lyons going on to form the Band Nirvana).

From the ashes of this to Bands, The Tomcats were re-formed. With the lack of success in London the Band decided to relocate to Spain, where they performed on the best Venues the Country had to offer (In Madrid, Barcelona and the Canary Islands). They also released a number of EP's that were quite well received there, getting to the Spanish Charts. With the return of the Band to London and the creation of new Material influenced by Psychedelia. Soon after the definitive change to the name July, they got a Recording Deal with Major Minor Records and a Management Deal with Spencer Davis.

Their First Album came out that same year (1968) and was completely ignored by everyone except for some critics who deemed it a “complete waste of plastic”, They broke up right after the release. However many of the Songs were later used on 60's Compilations and the Album itself has been re-issued a number of Times. It is one of the most sought-after Psychedelic Albums ever.

Well to be pedantic...This is the first album of later well-known progressive band "Jade Warrior" which is also highly recommended to listen to , while two founder members of Jade Warrior do indeed contribute a great deal to this album in terms of playing and arranging the music, the real creative force behind July was vocalist/guitarist/songwriter Tom Newman. He later moved into engineering and production, overseeing the construction of The Manor studios, and went on to engineer and co-produce Tubular Bells.

July were one of the many British Psych bands that came, saw, yet failed to conquer and fizzled out with less than a year notched up on their collective belts. In this short time they did manage to put out two albums, its rarity ensuring original pressings have gone on to attain near-Grail status amongst psych collectors.

The self-titled July was released in 1968, and really is a must-hear for anybody with a passing interest in psychedelic obscurities.

Although heavily influenced by the Californian psych sound, July manage to retain the quirkiness associated more so with the British acid-rock scene, throughout. This is ably demonstrated on the infectiously jaunty ‘Jolly Mary’, which successfully straddles the light-hearted wing of both camps, coming across Beatles-esque, Toytown, and West Coast, all in one eclectic nautical package.

Openers ‘My Clown’ and ‘Dandelion Seeds’ are eerily trippy, while elsewhere ‘Move on Sweet Flower’ is distinctly reminiscent of Gandalf. ‘Friendly Man’ alludes to some decidedly dark subject matter, although that could just be me misreading it, ‘The Way’ covers the eastern-mysticism angle with its energetic sitar-infusion, and ‘Crying is for Writers’ benefits from a scorching psychedelic guitar blitzkrieg slap bang in the middle.

July’s time on the music scene may have been but a slight ripple on an otherwise vast ocean of sound – though the constituent members would go on to enjoy success in various areas of the music industry – but the psychedelic gem they left behind deserves the status it enjoys today as one of the most sought after rarities of the acid era.
by Adamus67 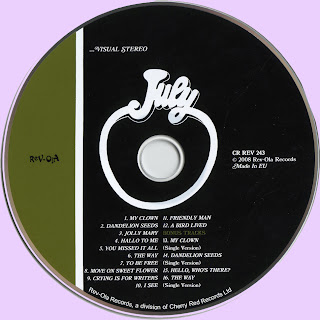 Free Text
Just Paste
Posted by Marios at 3:00 AM 12 comments: