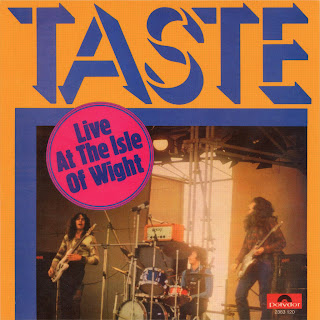 The festival at the Isle of Wight was to Europe what Woodstock was to the USA. Many problems came about as more rock fans than tickets available came to this usually peaceful island just off the coast of Portsmouth, England. The festival was held at East Afton farm in Freshwater, on the 13- by 23-mile island off the coast of Southern England. This was considered the last monster tribal gathering -- the five-day 1970 Isle of Wight Festival -- where 600,000 mostly stoned flower children turned ugly in obnoxious displays of hippie self-righteousness."

Many of the biggest rock stars of the time appeared at this festival including The Who, Free, Donovan, Ten Years After, The Moody Blues, Joni Mitchell, Joan Baez, Leonard Cohen and Jethro Tull, and ELP. Jimi Hendrix and Jim Morrison of the Doors made their last live stage appearance here.

Taste played through the madness of this giant concert where those who did not have tickets rushed and crashed the gates. 'Taste Live at the Isle of Wight' has some wonderful songs by Rory Gallagher and a cover for blues star Broonzy in "I Feel So Good." 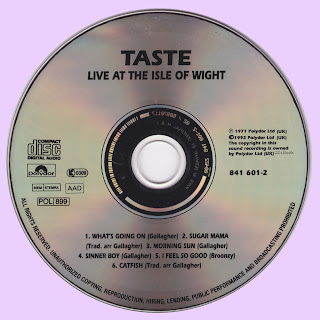