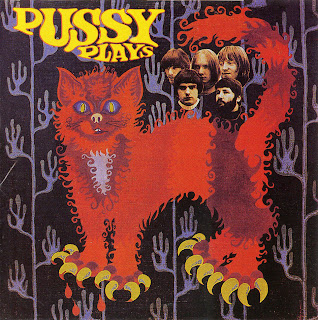 One of the most valuable vinyl artefacts of the UK’s psychedelic era. the Pussy album "Pussy Rays" nevertheless has remained something of a mystery even amongst hardcore collectors: despite counterfeit releases on both CD and vinyl formats over the last decade or so, the group's origins and personnel have continued to elude the best sleuthing efforts of fans and researchers alike.

So let's hear it for Edsel, who have undertaken the first-ever official reissue of the album, and the band's drummer Steve Townsend. who has kindly provided the full, previously unknown story behind the album's obscure genesis. The story of "Pussy Plays" really begins in the mid-1960s in Hertfordshire, where Townsend, singer Dek Boyce and bassist Jez Turner were all involved in the local music scene. "We played together in local bands who were well quite well known in the area", recalls Steve. "Initially we were called the Creepers, but when the psychedelic era came along, we used to come up with some silly names - for a while we were known as We Shake Milk I after the old milk posters! We cut a few demos, but nothing serious really, and certainly nothing that was commercially available".

During the middle of the decade, the Creepers had played the Hertfordshire beat/R&B circuit, supporting the likes of the Graham Bond Organisation as well as the Who just before the release of "My Generation". But while the beat boom had thrown up all kinds of regional strongholds, the arrival of the psychedelic era coincided with the country's capital city firmly re-establishing itself as the epicentre of the British music industry. Like most provincial acts of the era, Townsend and his colleagues slowly tired of being big fish in a small, increasingly stagnant pool.

The drummer duly placed an advertisement in the musicians' bible, Melody Maker, which was answered by a couple of London musicians guitarist Barry Clark and keyboardist Peter Whiteman. Clark turned out to be that most intriguing of animals: a fellow musician with contacts. He was particularly friendly with Danny Beckerman, an in-house writer/producer/ arranger/ musician at the Morgan Sound Recording Studios in Willesden. London.

The proverbial studio whizzkid, Beckerman had already released material under such names as Fortes Mentum and Barnaby Rudge. "Morgan already had their own label, and were in the process of setting up a progressive offshoot called Morgan Blue Town", explains Townsend. "Barry Clark and Danny Beckerman had agreed a deal to cut an album for Morgan Blue Town, but they were looking for a band to record it". With Clark, Whiteman and Townsend all on board, the I If drummer recruited two of his old colleagues in We Shake Milk, and the new band duty expanded to a five-piece with the addition of Dek Boyce and Jez Turner.

With additional vocals and I instrumentation supplied by - producer Beckerman, recording began for the album that was to become Pussy Plays. Eight songs were recorded, with Ihe Clark/Townsend composition  "The Open Ground" being the only non-Beckerman selection. Though one or two were purely instrumental workouts, there were no throwaways: tracks like Tragedy In F Minor" (inspired by the recently-issued Electric Prunes album Mass In F Minor, perhaps?) were assured I ill examples of the distinctive, quasi-classical piano approach that shaped so much of Beckerman's work, while "Comets" was a deliciously squally theremin and moog duel, presumably intended as some kind of Joe Meek style space adventure updated for the psychedelic era.

Other songs, however, seemed to suggest that the band were pulling in a slightly different direction, and "We Built The Sun" and "The Open Ground" in particular hinted at the otherworldly lysergic wispiness of early Pink Floyd, with the faux naif, wide-eyed vocals uncannily pitched somewhere between Syd Barrett and Dave Gilmour. So was the album an accurate representation of the band's musical style, or purely a studio project on which they were no more than hired hands? "Half and half, really", muses Steve Townsend. "Even though we more or less came together in order to make the album, we still had considerable input. For example, I wrote and recited the lyrics to The Open Ground", which was a real product of the era I wanted it to have that Tolkienesque, Lord of the Rings-type feel. But Danny Beckerman was really an old-fashioned pop songwriter, so we attempted to give his material a slightly tougher, more contemporary approach."

"We were also responsible for the album's overall concept – the band name, the album title, even the original artwork. Dek Boyce's brother-in-law was Gordon Beningfield, one of the country's leading wildlife artists - he was also commissioned to design a series of stamps for the Royal Mail. We asked him to help us out, and he came up with a cartoon cat design, which we sent to Morgan's publicity department as the proposed front cover. But for some reason they decided to go with their own version, which woo absolutely nothing like his original design!

The irony is that, if they'd used the original design, it would have become collectable amongst Beningfield's followers purely as an example of his work." By the summer of 1969 sessions were complete. Released as the second Morgan Blue Town album (the first had been by the Academy, a pop/folk outfit led by future soap actress Polly Perkins), the appearance of Pussy Plays was marked by a press launch at the Two Decks Club in Rupert Street, Soho. Sadfy this failed to have any noticeable effect on sales - like most of the smaller labels of the time.

Morgan found that issuing quality product counted for nothing without the sales support and distribution network that was necessary to break the album. The UK issue duly sank without trace as did an Italian release on the even more obscure Saint Martin label. The same Italian label also released a single from the album that coupled two of the strongest tracks. "All Of My Life" and "Come Back June", and boasted a picture sleeve (sadly this was merely the same design as the album's front cover).

It would appear that this coupling was only issued in Italy: no other Pussy singles are known to have been pressed in any other territory (and in case you were wondering, a 1972 Pussy 45 on the Deram label is the work of another band). Undeterred, Pussy kept going for a while, recording a handful of further tracks ("roughly half-a-dozen", reckons Steve Townsend) at Morgan Studios that sadly failed lit to gain a release. The group also played in and around the London/Home Counties area, as Townsend relates. "We got the live band together at the same time as the album, and we were doing gigs like the Scotch of St James (on 8 Jury 1969, trivia buffs) and one or two colleges as we were recording.

We didn't play all the numbers from the album, just the more straight-ahead ones. We were all pretty much into that sort of early Pink Floyd type sound, but we were probably rockier when we played live. We also played some old standards – Cannonball Adderley, Mose Allison, some of the blues stuff that was going round as well, and based the act around that." In addition to the Scotch of St James date, psych buffs may be interested to team of a gig at the Rhodes Centre in Bishop's Stortford on 3 February 1969, when Pussy shared the bill with another cult UK psych outfit, Tintern Abbey.

Now if only we had a video of that one... Barry Clark left and was briefly replaced by Gary Peters, before the band slowly disintegrated. "I can't remember exactly why the band drifted apart", admits Townsend, "but it basically split into two halves again – the original Hertfordshire trio and the two Londoners". While Danny Beckerman continued to mastermind a series of pseudonymous releases from the Morgan console room, Steve Townsend, Dek Boyce and Jez Turner returned to the relative tranquillity of Hertfordshire as the heart of a band called Twilly, leaving copies of Pussy Plays to fester in the bargain bins for the next decade or so until the album's eventual rediscovery during the Great Prog/Psych Stampede of the mid-1980s.

So it goes. Still, as you can now hear for yourselves, for once this is an album whose musical strengths come close to justifying the £300-odd price tag currently demanded for original copies.
By David Wells, with thanks to Steve Townsend. 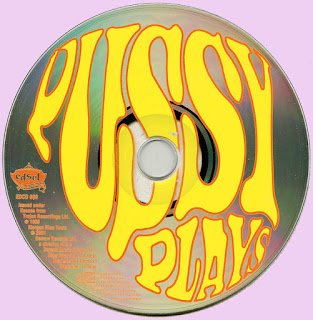 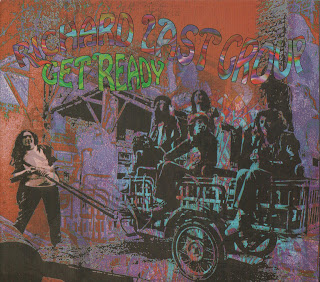 Italian Progressive Folk/soft-psychedelia, a rare and very hard to find album, original released 1972 under the title "Get Ready" and reissued by the Italian label Akarma.

A wonderful mix of psychedelic and folk progressive sounds with the peculiar use of the flute wich refer to Jethro Tull, there's a song by the Tulls including and also the Donovan's Lalenia.

Hard to find any further information about the band or the members but If we take as an element  the last song of the album, we can assume that the group originated from Southern Italy and in particular from Naples. 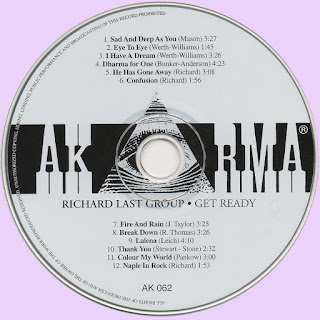 Free Text
the Free Text
Posted by Marios at 1:18 AM 10 comments: