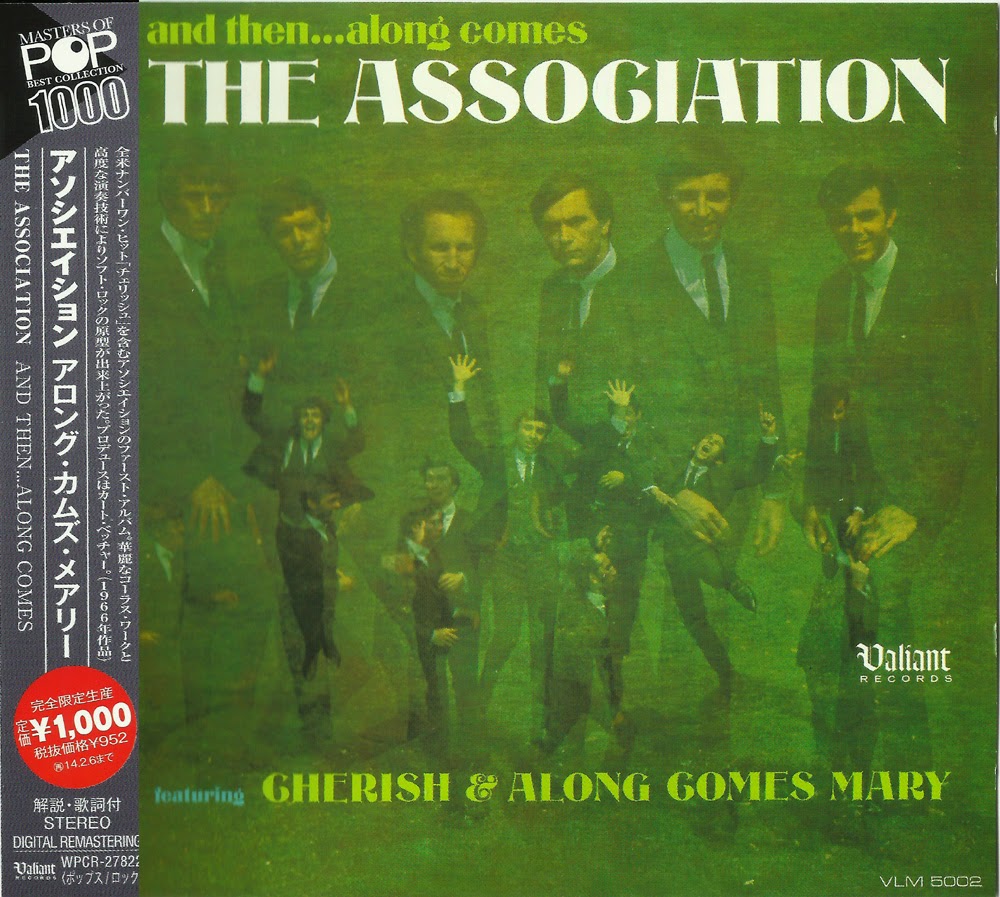 With the two smashes "Along Comes Mary" and "Cherish," the Association became one of the hottest new bands of 1966, the singles charting at #7 and #1 respectively. It was no surprise that their debut album, featuring both of those songs, was also a big success, rising to #5 and remaining their highest-charting LP ever, with the exception of their Greatest Hits compilation. The record also gave the Association the chance to showcase their versatility on material penned by both group members and outside songwriters, their complex multi-part vocal harmonies being the greatest unifying factor.

And Then...Along Comes the Association was actually preceded by a few singles as the group struggled to establish themselves as a commercial force. Covers of "Babe I'm Gonna Leave You" and Bob Dylan's "One Too Many Mornings," both in 1965, were very much in the folk-rock style that had become a craze with the emergence of the Byrds and their chart-topping cover of Dylan's "Mr. Tambourine Man" in the middle of that year. With "Along Comes Mary," the group moved toward a more pop-rock sound, aided by a dynamite tune from non-member Tandyn Almer, and a new producer, Curt Boettcher.

Boettcher was himself making a transition from the folk scene, in which he'd performed as part of the Goldebriars (who released a couple of albums on Epic), to pop-rock. He was already familiar with the Association when he played on a demo of "Along Comes Mary" with the group's lead guitarist, Jules Alexander, who enthusiastically pitched the song to the rest of the band. "When we first started, Jules was not officially designated, but he was more or less the musical director," remembers rhythm guitarist and keyboardist Jim Yester. "'Cause he had been in a couple rock bands before, he had a lot better handle on harmonic structure, and was obviously the best guitar player. He, a lot of times, would line out vocal parts. He'd sit down and figure it out on the guitar and say, 'Okay, you sing this, you sing that.' And then we'd adapt it, and somebody'd say, 'Well, listen. How about this note instead?' But basically things started with Jules."

When Alexander brought a tape of the demo of "Along Comes Mary" home, Jim continues, "He says, 'Listen to this song, we gotta try this.' And he said, 'Jim, why don't you sing it?' It was very casual. 'We need a high voice.' 'Cause on the demo, Curt sang it, and Curt's a real high tenor as well. I think the only thing that was roughly the same was that vamp line -- that was Tandyn's whole trip. That and the chord changes. But it was just one single voice."

With its dynamic interplay between Yester's lead and the rest of the band's vocal harmonies, as well as an intriguing lyric that jammed about as many syllables as were possible to fit into individual lines of a pop song in 1966, the song took a few months to catch on nationally. By the time it did break into the Top Ten in the summer, And Then...Along Comes the Association was ready to capitalize on it. In fact, however, work on the tracks that ended up on the LP had begun some time before, when Boettcher produced five cuts with the group in Gary Paxton's Homewood Studios. Aside from "Along Comes Mary," these sessions yielded its B-side, "Your Own Love," and two other tracks that ended up on the album, "Remember" and "I'll Be Your Man" (the fifth, "Better Times," remained unissued until 2002).

The Association's "One Too Many Mornings" single had been produced by Barry DeVorzon, the president of their label, Valiant Records. But as Yester explains, "After the thing with Barry producing didn't work out, we begged him to let our friend Curt produce us. And he finally condescended, but with the stipulation that we use some studio musicians. So we did a combination of studio musicians and us. But they did the basic tracks, and then we did a lot of the sweetening and the lead guitar stuff, things like that."

As the Association's harmonies were along the lines of the sophisticated vocal arrangements used by Boettcher's former group the Goldebriars, and his future ensemble the Millennium, "it was a good match in that respect," concurs Jim. "We were very harmonically involved, and Curt was too. Also, he was very aware of the MFQ [the Modern Folk Quartet], which was my brother's [Jerry's] group. We were all into the MFQ; a lot of groups went to school on the MFQ in L.A. Everybody else made it, and they didn't. It's very bizarre." (Both 1960s albums by the Modern Folk Quartet, who also used sophisticated harmonies blending elements of pop, folk, and jazz, have also been reissued on CD by Collectors' Choice Music.)

The decision to make "Along Comes Mary" the single was, in a sense, ordained. "There was three or four of us that were involved with [the religious faith] Subud at that time," says Yester. "Roger McGuinn was also in it, [and] Cyrus Faryar from the MFQ. We convinced the record company that we were gonna take the five songs we recorded, and the elders of Subud did this thing called testing, where you would tell them the name of a song, and then they would kind of meditate and tell you yay or nay. We did that, and the two strongest reactions we got were from 'Along Comes Mary' and 'Your Own Love.' Actually, 'Your Own Love' got the strongest reaction from them. That song I wrote after I was in Subud for a while, that's kind of where it was coming from, so for me, that's why that reaction was [so positive]. But that's why those two songs were the first release. Then we went back to the record company and said, 'Okay, these are the two.' And they said, 'Okay.'"

To fill out the album, the group would record more material in a different studio, which like the first was run by noted producer, engineer, performer, songwriter, and general musical jack-of-all-trades Gary Paxton. "The first one [Homewood Studios], where we did the basics, the studio was an old garage, and the booth was in an old Greyhound bus," laughs Yester. "His second studio [G.S.P.], the studio was the downstairs, like the living room and dining room of a house, and the studio was in a bathroom upstairs. Very bizarre. But it had great sound." In addition, vocals were recorded at a more traditional Hollywood facility, Columbia Recording Studios.

Among the top sessions musicians in the support cast were guitarist Mike Deasy (who'd go on to play on other Association albums, as well as writing a song on their Insight Out LP), bassist Jerry Scheff, and percussionists Jim Troxel and Toxey French, with Boettcher contributing tone generator/oscillator. "Curt was very into a lot of outside instruments, and we were very up for experimentation, so we used a lot of different things," remarks Yester. "In fact, we were one of the first to sync two four-tracks  together to make an eight-track, using a VSO, variable speed oscillator, to match the speeds of the two tape machines. But by the time we went to finish the first album, Scully came out with the eight-track. When we were working at Columbia Studio A, that's what we were using."

As for the material selected for the album, as Yester notes, "most of those songs we'd been doing in concert for about a year or so anyway."  The Association LPs would feature a remarkably even spread of songwriting credits among the members, and all six save Brian Cole wrote or co-wrote material on And Then...Along Comes the Association. At this point Jules Alexander (then still performing under the name Gary Alexander, as he would until 1968) and singer-multi-instrumentalist Terry Kirkman "were probably a little more prolific," adds Jim. "But most of the time everybody had at least one or two songs on the album. We tried to have everybody included. We had a publishing deal where everybody shared in everybody else's publishing. It was very clever. We actually had [a] publishing deal before we had a record deal. Because we auditioned for Capitol, and they didn't sign us, but they wouldn't let us out of the building until we gave them a meeting with [the] head of their publishing. 'Cause they couldn't believe a group with six guys, and everybody wrote. And they were pretty decent songs."

The group did cover a couple of songs from outside sources on the album. "Don't Blame It on Me" was written by brothers Don and Dick Addrisi, who penned the massive 1967 Association hit "Never My Love." "Blistered" (later a hit for Johnny Cash) came from Billy Ed Wheeler, also known for writing the folk-rock classic "High Flying Bird," co-writing the Kingston Trio's hit "The Reverend Mr. Black," and co-writing "Jackson" (hit duets for the teams of Johnny Cash & June Carter and Nancy Sinatra & Lee Hazelwood), as well as scoring a big country hit on his own with "Ode to the Little Brown Shack Out Back." The second big hit off the LP, however, would be a Terry Kirkman original, though it wasn't even planned as the follow-up to "Along Comes Mary."

As Yester tells it, "We were going to release 'Enter the Young.' The version that I remember was a DJ from Ohio started playing 'Cherish' off of the album, and it went right up the charts in his area. Either the record company said, 'wait a minute, let's rethink this,' or the other version is, [Association manager Patrick] Colecchio convinced the record company to release 'Cherish' instead." It was a wise decision; on September 24, 1966, the single began a three-week run as the #1 song in the nation.
by Richie Unterberger 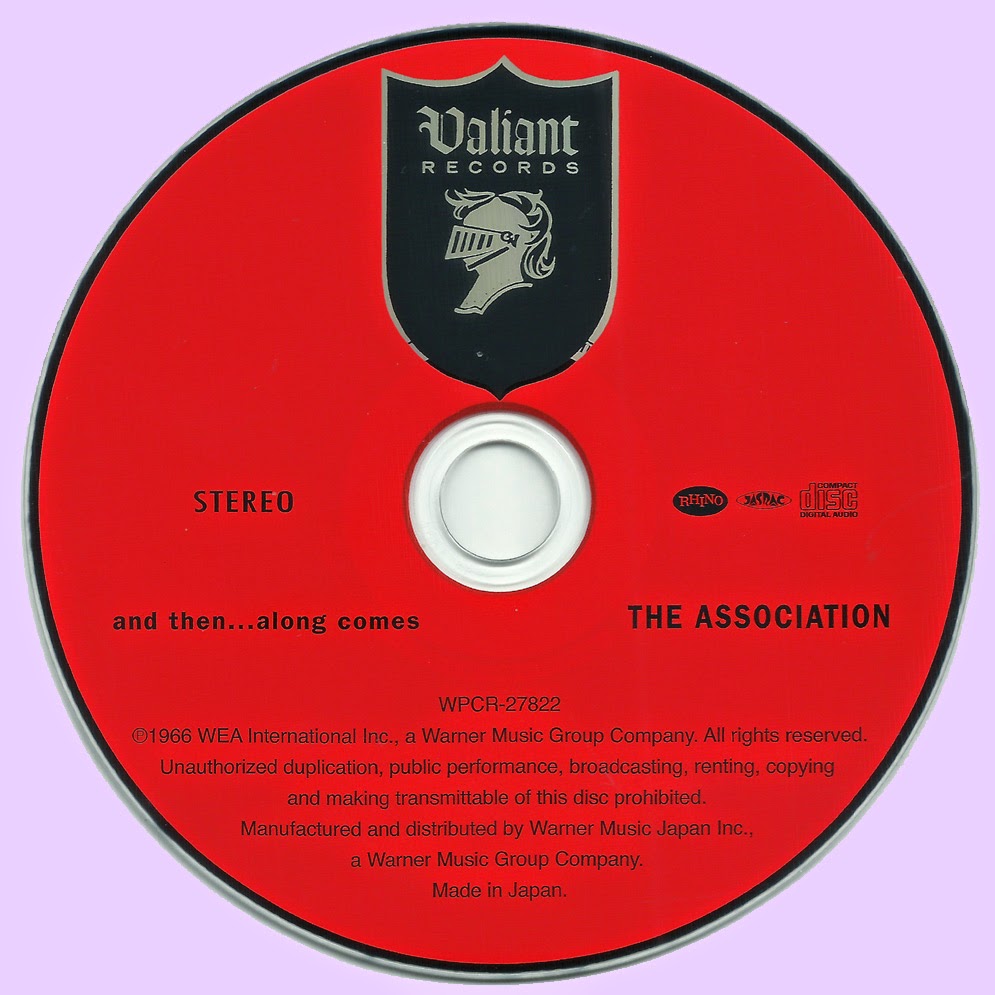 Free Text
Just Paste
Posted by Marios at 2:11 AM 10 comments: