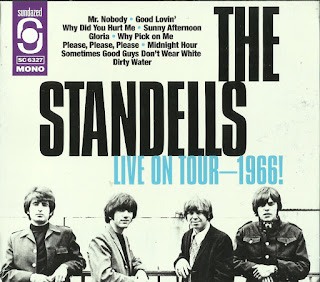 Whether during their Club Au-Go-Go beginnings or decades later as garage rock's still-deadly elder statesmen, the Standells are renowned for a sensational stage sound. Their Jimmy Reed-is-atwister take on "Help Yourself" was earliest evidence; a full-tilt party recorded live at PJ's in Hollywood (and a Liberty Records '64 exclusive).

However, it is the Standells' amazing string of punkish tough-guy anthems on the Tower Records label that are-best remembered. During this commercial apex, Tower should have been burying the competing cash-in of older PJ's tracks (on a Liberty subsidiary, Sunset Records) not with the all-covers, career momentum-killing The Hot Ones! misfire but instead a live LP set of the Standells' longer-haired repertoire. Look no further than the opening credits of AlP's celluloid freak-out Riot on Sunset Strip, featuring an incendiary performance by our heroes, for a lip-sync suggestion of what could've been.

There's a happy ending to this story, however. It turns out the Standells were in fact recorded at their peak, On Tour— 1966.' "I never even knew it existed," the Standells' late, great lead singer-drummer Dick Dodd told this writer. Rescued from a professionally recorded concert at the University of Michigan ("Homecoming '66," headlined by a certain world-famous West Coast fivesome), the recording captures the Standells in astonishingly clean sound that rivals their legendary studio recordings.

Regardless of the fast-paced nature of this performance (Dodd: "On tours, we would do one set. Depending on how many acts, we were allowed maybe a half hour"), this is an essential document of mid-sixties live rock 'n' roll; a superb example in sound. Speaking in Standells terms, fuzztone 'n' Vox organ are out front where you'd want them, bass is in place, lead and backing voices in balance and—most rare for a mid-sixties concert tape—percussion still part of the plan, with bass drum, cymbals, toms and snare within earshot at all times.

Highlights include a triumvirate of hits delivered in versions that rival the original radio romps. "Why Pick on Me," "Good Guys" and "Dirty Water" showcase Dick Dodd's peerless drumming 'n' vocal arsenal. Dodd's backbeat that drives these best-known numbers is skillful and on par with the studio counterparts. The same can be claimed of his lead vocals, which are basically flawless. Dick explained to me the difference: "When we were in the studio, we would learn a song, put down the track and say That's good.' Then when we went on the road, it got better."

Fan-fave B-sides are also delivered, including the stomping 'Why Did You Hurt Me" and "Mr. Nobody," the latter a killer set-opening spotlight for organistvocalist Larry Tamblyn, also featuring a heaping helping of guitarist Tony Valentino's heralded fuzztone. Just dig the applause for Tony V.

This October 22, 1966 campus concert was no exception, with a set spiked with Standells-branded covers. Early on, they speed through a rapid-fire rendition of the Rascals' "Good Lovin'," lasting just long enough to remind us of the old dance-inducing PJ's version of the band. More contemporaneous perhaps is a cover of the Kinks' "Sunny Afternoon," sung by Tamblyn. In a knowingly selfmocking tone, at its conclusion he even plugs The Hot Ones.' all-covers album.

"Gloria" surfaces for the first time in a full Standells treatment. Dodd plays it cool (dryly humorous, too) while Valentino and Tamblyn steal the show with crowd-pleasing various instrumental sound effects. With the exception of "Dirty Water," the audience only truly erupts with approval during "Gloria," to which Dick Dodd observed with relief many years later, "Finally! This crowd sounds real regimented and polite. They clap and that's about it. Usually on these tours, there were at least a couple of girls screaming now and then. On this, it sounds like there were a lot of adults in the audience!"

Dick Dodd gets to exercise his R&B roots once more with a robust vocal on "Please, Please, Please." The between song banter is instructive. Judging by a southern drawl, bass player (and Floridian of the group) Dave Burke finally takes to the mic explaining a bit of musical chairs. For this number, Dodd steps away from his drum kit (freeing him to give his best James Brown impersonation), subbed briefly by a stickwielding Valentino.

But of all this Top 40 raiding, arguably the best is saved for last with "Midnight Hour," another road-toughened favorite that is performed with authority here. Frankly, a studio version of this should have been included on one of their Tower albums, and I don't just mean The Hot Ones! Dick Dodd was right on the money with his assessment: "I think everybody's really going to enjoy this," he offered proudly. He was being modest. This may just be the finest recorded example of vintage live '66 American garage rock.
by Jeff Jarema 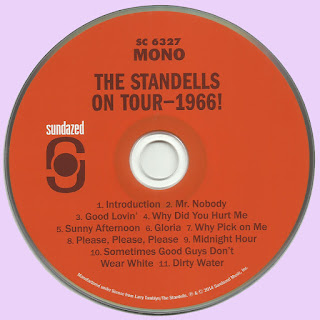 Free Text
the Free Text
Posted by Marios at 7:09 AM 7 comments: