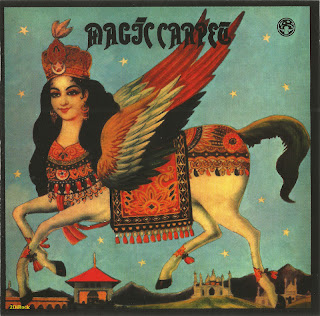 The sitar player, Clem Alford, was classically trained in the Indian tradition, as was tabla player, Keshav Sathe. Alisha Sufit, who first met Jim Moyes when they were both students at Chelsea School of Art in the sixties, writes original songs reflecting diverse influences - including traditional, contemporary and . The band recorded one eponymous album first released in 1972. The original vinyl version has since become a sought-after collectable, now reissued on CD by Magic Carpet Records label. Visit the MySpace page or their web site for more information.

Quote: 'Based around the classically trained sitar virtuoso Clem Alford and the breathtaking ethereal vocalist Alisha Sufit, Magic Carpet delivered perhaps one of the finest Indian-influenced psychedelic folk albums of the 1970's. Unfortunately this supremely talented collective split before the album was released. Alisha Sufit's astonishing vocal talents are included in nine of the twelve tracks, the remaining three being instrumental. Alisha Sufit and Jim Moyes play guitar, with the brilliant Keshav Sathe on tabla percussion. This album has been described as 'a psych folk gem - a unique and extraordinary fusion of east and west, Magic Carpet being one of the very first bands to truly combine Indian and western instrumentation'.

For the listener who craves the deep, warm, dark green and forest brown, fog-drenched Indian influenced psychedelia that chartered its way out of San Francisco in the late sixties / early seventies, this reissue of the Magic Carpet's debut record will ring a true chord. True, the band hailed from the UKA  nowhere near the flower children of the Haight, but their brand of "Eastern Psych Folk" is close kin to After Bathing At Baxter's era Jefferson Airplane (a seriously underrated record) and calls to mind the Bay Area folk revival scene going on today.

In a time of Devendra Banhart's elfin freakiness, Joanna Newsom's evil-angel resurrections, and the resurgence of interest in Vashti Bunyan, the Magic Carpet's 1972 lost classic could not sound fresher. Alisha Sufit is a resurrecting chanteuse whose dark voice is crystal clear and mesmerizing; Clem Alford's sitar playing is top notch and truly psychedelic. The songs come as old friends (our favorite: "Father Time") and hang in the air as mysteries, leading to the sweet 20+ minute instrumental raga not found on the original release. Top notch rainy day music, and for those so inclined, a perfect bong stuffer for the holidays.
by David Katznelson 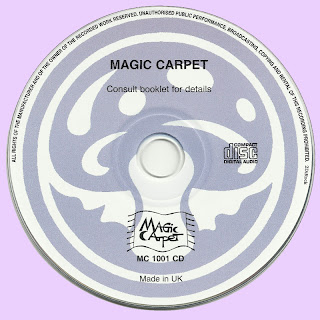 Free Text
Just Paste
Posted by Marios at 5:48 AM 7 comments: