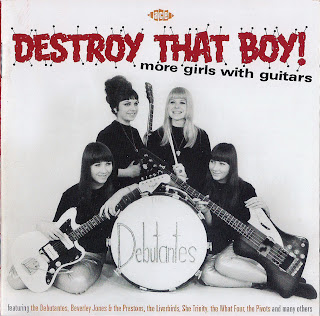 This post is dedicated to Nelwizard by Jim the Greek

“Destroy That Boy!”, the sequel to 2004’s “Girls With Guitars”, delves into the world of garage femmes and all-girl bands in a quest to prove that females of the species do indeed rock, roll and even snarl. In the post-Beatles beat boom, many an impressionable lass was inspired to take guitar in hand and toe the line with their male counterparts, with at least 160 touring female bands in the USA alone. A select few hit the recording studio to leave their aural mark on the decade, from which Ace has melded the cream of crop with some solo sisters to create another healthy 24-track dose of girl garage goodness.

This time old Blighty has its share of representatives, including fully-fledged female groups She Trinity and the Liverbirds. She Trinity – whose original members hailed from the UK, Canada and the USA, hence their somewhat confusing moniker – appear with their first and last (and most acclaimed) singles. The Liverbirds’ success was limited to their adoptive home of Germany, where they recorded two albums of R&B and rock’n’roll covers, three of which are showcased here. Schoolgirl duo the Termites get their pincers into a Stones classic, while South African ex-pat Sharon Tandy and Coventry’s Beverley Jones give out some gutsy performances too.

From across the Atlantic, alluring society girls the What Four open proceedings. The cover shows the Debutantes from Detroit, whose talents and glamorous image scored them a far-eastern tour and gigs alongside Motown’s finest. Another pivotal group was the Feminine Complex, formed by lead guitarist and songwriter Mindy Dalton, who achieved the rare feat of releasing an LP, but here we’re treated to two demos, including their wonderfully lo-fi version of the Monkees’ ‘(I’m Not Your) Stepping Stone’, cut in their first incarnation as the Pivots.

Elsewhere come the Starlets with an attitude-soaked take on ‘You Don’t Love Me’, Swedish bombshell Ann-Margret with both decks of her single for Lee Hazlewood’s LHI label and Raylene Loos and her cohorts the Blue Angels, who contribute a rollicking rendition of ‘Shakin’ All Over’. The Girls (nope, not the same gang as on “Girls With Guitars”) debut with an unreleased cut produced by Sly Stone, while woe betides the man on the receiving end of Aussie Toni McCann, who let’s rip with ‘No’.

Jack Nitzsche protégée Karen Verros kicks off the mid-section with, a fuzz-laden mind-blowing gem written by Donovan. Project X (whose line-up included Scott McKenzie) delights with a jangly folk-garage affair and Cheryll & Pam wax lyrical in ‘That’s My Guy’. British Invasion off-shoots the Lady Bugs’ ode to the American fraternity is a hilarious romp and the wiggy Fondettes pay tribute to the mop-headed boys who started it all.

Much more info on these artists is to be found in the glossy feature-packed booklet, which includes interviews with Jan McClellan of the Debutantes and Beverley Jones. So let the girls blow the dust of their guitars yet again and take a trip down to the tougher side of girl-groupsville.
by Matt Meek 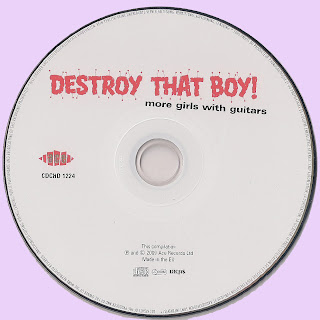 Free Text
the Free Text
Posted by Marios at 7:09 AM 19 comments: