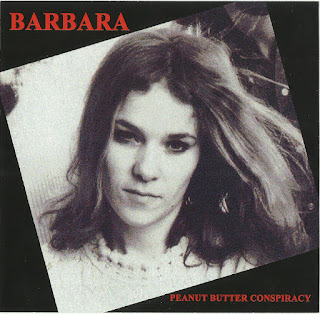 "I put a lot into this 'work of love' release featuring Barbara", states Alan Brackett, "because I knew that there were people out there that would love to hear her sing more songs than what are already released on PBC records. She was blessed with a warm, natural and beautiful voice and I feel these recordings should be shared with her fans.

"Roses Gone" was recorded by The Ashes in 1966. This is the group that Barbara, John and Alan were in prior to the Peanut Butter Conspiracy along with Jim Chernis and Spencer Dryden, later to be the drummer with the Jefferson Airplane.

"Get Out Of My Dreams", "I Miss You", "It Comes And Goes With The Wind" "Foolhearted Woman" and "Love Came So Easy" were songs written by Alan and recorded between 1967 and 1970 but never released. PBC vocal harmonies can be recognized in all of these except "I Miss You", which Barbara sang solo.

"Shuffle Tune" was recorded during a vocal rehearsal at Alan's house on a Teac A1200 in 1968 with Barbara, John and Alan playing and singing live "Return Home" and "Good Feelest" were recorded in 1969 and ended up on the PBC Ip, "For Children Of All Ages". "Step Aside (You're Crushing All The Flowers)" was recorded by PBC in 1969 for the movie "2000 Years Later"

"True Believers" was recorded in 1969 by the PBC using the name  The Windows for the Hell's Angels movie, "Run Angel Run" It features Barbara with an overdubbed harmony sung by her on the last verse.

Barbara (Sandy) Robison is at last featured on every song in this Peanut Butter Conspiracy release. The recordings date from 1966 through 1970. Five of them have never been previously released, two are from rare movie soundtracks, and five are hand-picked from previous PBC releases. There has always been consensus from their fans that Barbara possessed the most beautiful voice of the 1960's rock and roll era. This release is for those who have always wanted and now can hear more of her warm, soulful voice.

On April 6, 1988, Robison was performing in Butte, Montana. During her concert, she fell ill and was transported to a hospital in Billings, Montana. Robison did not recover, and died on April 22, 1988 from toxic shock poisoning at the age of 42. 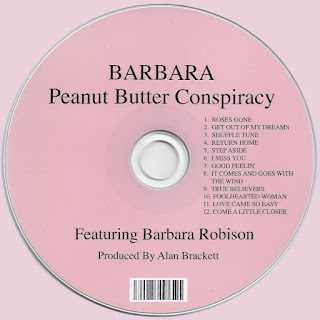