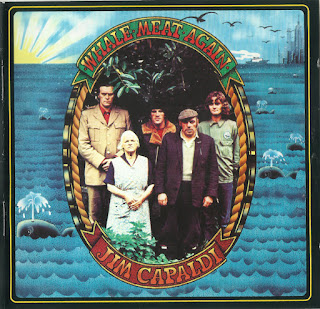 Jim Capaldi's second solo album was recorded virtually simultaneously with Traffic's final album of the 1970s, Where The Eagle Flies. Indeed, it may have even arisen as a result of the long genesis of that album which took over a year to record, saw percussionist Rebop Kwaku Baah being fired midway through the sessions and the band seeming to lose a sense of direction and even purpose. The awfully punned Whale Meat Again was prefaced by a non album single, Tricky Dicky Rides Again released in 1973 as a reaction to the political mess of the Richard Nixon Watergate scandal. More of a 'leftover' from the first solo album - indeed the title track of that album was the b-side of the single - the song features Paul Kossof on guitar (nice solo!) with prominent presence of the Muscle Shoals Horns and some strange sounding Mellotron.

A very satirical comment that would have been lost to obscurity (even though Capaldi later revisited the song writing new lyrics and renaming it Risky Business for inclusion on 1978's The Contender album) if Esoteric hadn't resurrected it for inclusion as a bonus track to this release. For the new album Capaldi largely eschewed inviting contributions from guest musicians being content to rely on the core unit of Muscle Shoals session musicians David Hood (bass), Roger Hawkins (drums), Barry Beckett (piano and organ), Jimmy Johnson and Pete Carr (guitars) with the inevitable Muscle Shoals Horns.

Opening number It's Alright is rather a misleading song as to the style of the album being a sedate, easy going number with a light reggae feel, including a steel drum, no doubt influenced by Capaldi's friendship with Bob Marley to whom he was introduced by Island Records founder Chris Blackwell. I suppose it is an okay song, rather inoffensive but neither one thing or another and something that I would have thought would have been better placed as a single b-side than an album opener. The title track is a totally different kettle of fish, or given the subject, should that be 'breed of mammal'? An anti-whaling song with a hard edged bitterness, superlative playing from Pete Carr and The Horns producing some of their most definitive and characteristic contributions.

However, it is on the lyrics where Capaldi excels: Whale meat again, under the sun, every twelve minutes and another one’s gone. His meat is in your make up, his flesh is on your lips, as a nuclear warhead explodes in his hips. Harry Robinson is drafted in once again to provide the string arrangement on the soulful ballad Yellow Sun. Carr's dobro slide guitar provides an Americana feel with a fine lead vocal by Capaldi and backing vocals from the pseudonymous Potato Smith and Laurence Peabody - speculated as being Capaldi and Winwood, although I have my doubts. The song is typical of the era but with a graceful melody it passes muster. I've Got So Much Lovin' features some marvellous female backing vocals, which sadly go uncredited in the booklet, but sounds very like it may be the prolific backing singers Irene and Doreen Chanter who, along with Liza Strike, enhanced so many records from the 1970s. The expansive sax gives the number a sleazier feel but overall the energy and enthusiasm of the performance is a delight.

First of the two standout tracks on the album is Low Rider. A looser, more relaxed feel prevails giving extra space for Carr's guitar work to shine through and a more biting string arrangement to take a more upfront role. The closing jam would have been great live and worthy of inclusion on Traffic's On The Road live album. Unfortunately My Brother is marred by a terrible sounding synth which dates an otherwise decent song, suppose it was cutting edge at the time but, unlike for example the Mellotron, some of the early synthesisers just sound cheesy and pathetic to modern ears. Never fear, all is redeemed with Summer Is Fading which is the most like Traffic that Capaldi ever sounded in his solo guise.

Largely due to the presence of Winwood on organ and bass, plus Rebop on conga (which would suggest the track was recorded before his firing from Traffic) and the absence of any of the Muscle Shoals Musicians - guitars are played by Bubs White and drums by Gaspar Lawal - the song is an extended jam that is a delight from beginning to end. There are places where it is obvious that the vocals influenced the early solo career of Paul Weller as it could almost be him singing. (Weller is obviously a fan as shown by his contributions to the Capaldi tribute concert back in 2007). Interestingly the original lyrical idea is credited to Vivian Stanshall who co-wrote Dream Gerrard on the final Traffic album, which might suggest that an earlier version of the song was perhaps slated for that album - could explain the musical similarities. The album winds up with a brief take of We'll Meet Again from which the album title was punningly derived.

A more cohesive effort than the debut release and, for Traffic fans at least, probably the most essential of the Capaldi albums.
by Mark Hughes 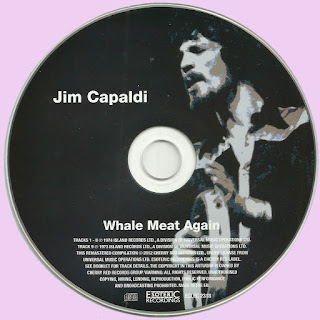 Free Text
Text Host
Posted by Marios at 7:38 AM 4 comments: