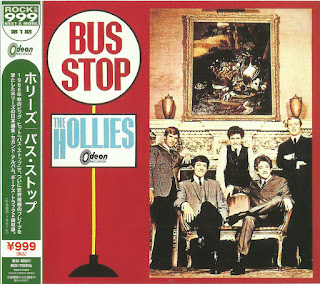 When the Hollies -- one of the best and most commercially successful pop/rock acts of the British Invasion -- began recording in 1963, they relied heavily upon the R&B/early rock & roll covers that provided the staple diet for countless British bands of the time. They quickly developed a more distinctive style featuring three-part harmonies (heavily influenced by the Everly Brothers), ringing guitars, and hook-happy material, penned by both outside writers (especially future 10cc member Graham Gouldman) and themselves, eventually composing most of their repertoire on their own. The best early Hollies records evoke an infectious, melodic cheer similar to that of the early Beatles, although the Hollies were neither in their class (not an insult: nobody else was) nor demonstrated a similar capacity for artistic growth. They tried, though, easing into somewhat more sophisticated folk-rock and mildly psychedelic sounds as the decade wore on, especially on their albums (which contain quite a few overlooked highlights).

Allan Clarke (lead singer) and Graham Nash (vocals, guitar) had been friends since childhood in Manchester, and they formed the nucleus of the Hollies in the early '60s with bassist Eric Haydock. In early 1963, EMI producer Ron Richards signed the group after seeing them at the famous Cavern Club in Liverpool. Guitarist Vic Steele left before the first session, to be replaced by 17-year-old Tony Hicks. Drummer Don Rathbone only lasted for a couple of singles before being replaced by Bobby Elliott, who had played with Hicks in his pre-Hollies group, the Dolphins. The lineup changes were most fortuitous: Hicks contributed a lot to the group with his ringing guitar work and songwriting, and Elliott was one of the very finest drummers in all of pop/rock. Although their first singles were R&B covers, the Hollies were no match for the Rolling Stones (or, for that matter, the Beatles) in this department, and they sounded much more at home with pop/rock material that provided a sympathetic complement to their glittering harmonies. They ran off an awesome series of hits in the U.K. in the '60s, making the Top 20 almost 20 times. Some of their best mid-'60s singles, like "Here I Go Again," "We're Through," and the British number one "I'm Alive," passed virtually unnoticed in the United States, where they didn't make the Top 40 until early 1966, when Graham Gouldman's "Look Through Any Window" did the trick. In 1966, Eric Haydock left the group under cloudy circumstances, replaced by Bernie Calvert.

The Hollies really didn't break in America in a big way until "Bus Stop" (1966), their first Stateside Top Tenner; "On a Carousel," "Carrie Ann," and "Stop Stop Stop" were also big hits. Here the Hollies were providing something of a satisfying option for pop-oriented listeners that found the increasingly experimental outings of groups like the Beatles and Kinks too difficult to follow. At the same time, the production and harmonies were sophisticated enough to maintain a broader audience than more teen- and bubblegum-oriented British Invasion acts like Herman's Hermits. Their albums showed a more serious and ambitious side, particularly on the part of Graham Nash, without ever escaping the truth that their forte was well-executed pop/rock, not serious statements.
by Richie Unterberger 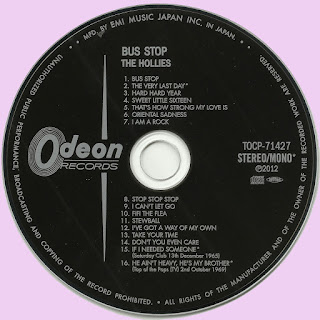