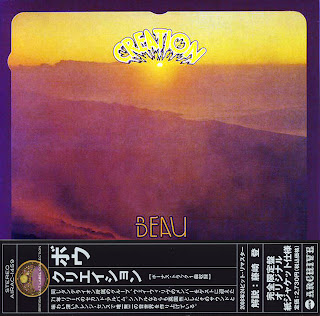 The ‘Creation’ album was recorded over three days in 1971 at Hollick and Taylor studios, Birmingham, England. Musicians involved were myself (Beau), Steve Clayton and Jim Milne of The Way We Live. Control room duties were handled by John Brierley, The Way We Live’s recording engineer and producer, and studio owner/chief engineer, John Taylor.

For musos out there, I played my Harmony Sovereign H-1270 12-string guitar on all the songs; also clavioline on ‘April Meteor’ and Farfisa organ on ‘Creation’. Jim took all other guitar and bass parts and sang harmony vocals on ‘Release’, and Steve played all drums and percussion. If I remember rightly, Jim used a Gibson SG as his main electric instrument, and a home-built bass! Steve used his Ludwig kit. The sleeve for the album was created by Forehead Designs, London, under the supervision of John Peel’s business partner (and Dandelion co-owner) Clive Selwood.

The photo on the back was taken at a park in Leeds called The Hollies by Ken Willcock, a photography student. Forehead went on to design several covers for later Dandelion albums. There is however a story behind the cover design. Originally, a totally different sleeve had been planned. Created by Nick Cudworth (of the band Siren), John Jones and Boris Brook, the sleeve was even printed and is now something of a collectors’ item. But the concept of this first cover was thought to be too dark and forbidding, so the new, more optimistic ‘sunrise’ sleeve was produced. This is how the first design looked. In retrospect, I think we were right to go with Plan B!
by C J T Midgley 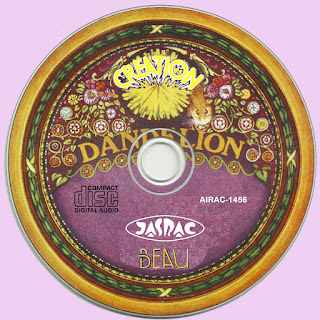 Free Text
Text Host
Posted by Marios at 7:22 AM 11 comments: