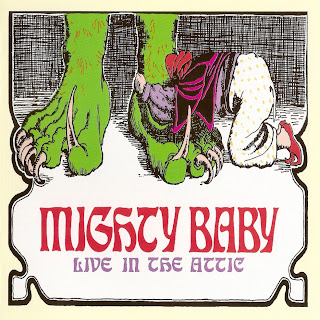 Mighty Baby was the short-lived band that followed the Action, one of the finest and most unheralded outfits of the ‘60s British rock/pop explosion. Upon finding no label willing to support them while making what is now known as Rolled Gold, a seamless fusion of Sunset Strip folk-pop and Northern soul, the band imploded, with the bulk of the members finding identity in the hippie subculture.

As Mighty Baby, they came as close as England would to having its own version of the Grateful Dead, in terms of the musical journeys this group would take. Live in the Attic represents material from the two years in between their albums, and for fans, it’s a great opportunity to hear how this band developed.

The first three tracks come from a live recording in 1970, where the band was opening for Love at Lanchester University, and represent the altogether loose, free, vibrant style of on-the-spot improvisation of which these seasoned musicians were capable. The lengthy “Now You See It” builds to a satisfying peak, and is followed by three-minute rockers “Stone Unhenged” and “Sweet Mandarin.” The remainder of the disc comes from a live allnighter in Olympic Studios.

Two tracks are represented here: “Now You Don’t,” split into four parts, and the slightly melancholy “Winter Passes.” Of these selections, the former represents a big step for Mighty Baby, as they allow free-form rock jamming to coalesce into a big, bright, groovin’ machine, particularly as it reaches the third section.

The set comes complete with sleevenotes, rare photographs and an introduction from their bassist, Michael Evans, making it simply essential for all fans of the band.
Still-single 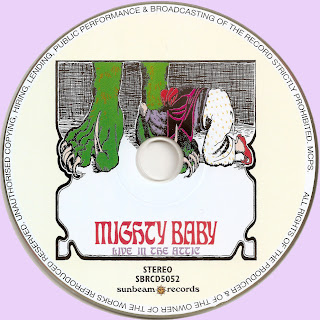