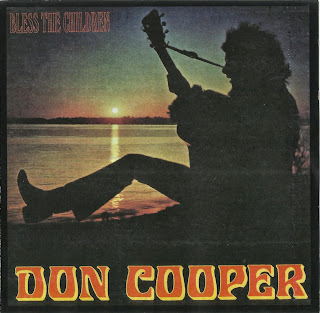 Don Cooper was a promising folk-style singer/songwriter who enjoyed some modest success -- mostly on-stage -- during the early '70s. Coming up as he did amid the singer/songwriter boom of the era -- dominated by the likes of James Taylor, Carole King, Joni Mitchell, Leonard Cohen, and Loudon Wainwright III -- he got lost in the shuffle, perhaps because he was signed to a label (Roulette) that was positioned badly, in terms of image and distribution, to break an artist working in his particular genre.

Born in the mid-'40s, he grew up in various locales, his father's work taking the family to numerous towns across the country throughout his childhood. Cooper began playing the ukulele (which was a big instrument among kids in the 1950s) in elementary school and was drawn to country music as he grew older. In high school during the early '60s, he played in various bands, with a repertory heavy on the work of James Brown, Buddy Holly, and the Beach Boys, all done country-style.

The transforming moment of his life came when he first heard The Freewheelin' Bob Dylan, the 1963 album that established Dylan as a major songwriter and artist. By that time, Cooper was playing a regular gig at a local coffeehouse and began mixing his music and Dylan's songs. By the end of the '60s, at just about the same time that James Taylor and Joni Mitchell were poised to emerge as major artists, Cooper found interest in his work from three different labels, and ended up going with Roulette Records, a company that was primarily associated with jazz (Count Basie, et al.) and pop/rock (Tommy James & the Shondells, et al.), founded and run by a totally disreputable figure named Morris Levy.

In early 1970, just weeks after signing a contract, his self-titled debut album was released. Cooper proved himself strong singer, with a rich and powerful voice, and also a serious and dauntingly talented songwriter on this and on his subsequent three Roulette albums, which he produced himself. He was good enough to rate support spots on-stage with the likes of Blood, Sweat & Tears (in their peak years) and Chicago at major venues, including Carnegie Hall. He was, thus, able to reach thousands of people at a time at some of his bigger support gigs.

What he wasn't getting, however, were major record sales -- not that Roulette was putting much into marketing his albums, either. Put simply, he was probably the right artist at the wrong label. Apart from its unique jazz roster of the late '50s and early '60s (a point when Levy, with deep pockets and personally being a big jazz enthusiast, was able to pick up a lot of artists being dropped or overlooked by the major labels), Roulette's big strength had always been at breaking big singles, mostly by virtue of Levy's mob connections and his "unique" access to the jukebox business.

But the music industry was different by the 1970s, and on top of that, Don Cooper wasn't aiming at listeners who did much with jukeboxes -- he was recording songs that were going to get placed in or played on a lot of them (at least, not outside of a few college-town pizzarias). In short, he wasn't Tommy James and wasn't writing "Mony Mony," much less recording it. On Reprise or Columbia, he'd have had a good shot, but Roulette wasn't really the place for an artist like him, anymore than it would have been for Leonard Cohen or Livingston Taylor.

At some point both parties took a look at the contract that linked them together and recognized a losing proposition for both sides. Cooper was obligated to deliver ten LPs to Roulette, a daunting number for any artist, and Roulette could see little profit in continuing to record him much past 1972 and his fourth album. The two parties went their separate ways in the mid-'70s, and Cooper's four LPs were consigned by the thousands to the cut-out bins.

For his part, Cooper eventually gave up the life of a touring and performing artist, in favor of making records of children's songs, a goal that came to fruition in that peculiar niche market -- which drew upon his folk and popular music backgrounds equally -- during the 1990s, with help from Random House. In 2005, Europe's Delay Records released a 15-song compilation CD of Cooper's work under license from EMI (which owns the Roulette library for Europe), entitled Howlin' at the Moon. The singing is great and even the production is worth hearing.
by Bruce Eder 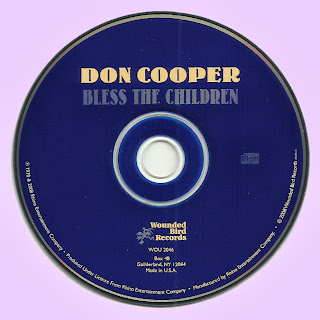