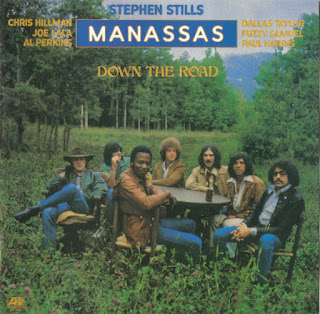 Stephen Stills and Manassas released a brilliant debut album in 1972 and it would become recognized as one of the better albums of its era. So what did they do for an encore? They issued a solid, if not brilliant follow-up.

Down The Road has been criticized as a poor album, but I have to disagree. It may not have had the highs of its predecessor, but there are also very few lows. Any of the tracks could have been included on their first album without reducing its quality. Unfortunately this was the last gasp for Manassas as Stephen Stills was again moving on. In retrospect he should have realized that this band was a keeper.

The one fact which is very plain is the writing credits. Members of the group wrote or co-wrote five of the ten tracks with Stills. That means Stills took a solo writing credit for the other five, which was a much smaller percentage than the first album and may say something about his overall commitment.

There is a lot of listenable material here. “Isn’t It About Time” is a hard edged rocker with Joe Walsh bringing his guitar virtuosity to the mix. “Down The Road” is another competent rock tune. Even Chris Hillman gets into the rock ‘n’ roll act on “Lies” with his lyrics about superficial love. “Rollin’ The Stone” is the final track and it sends Manassas rocking into the night. To truly appreciate this track you need to turn your stereo system up to near sonic levels, sit back, and hang on to something.

My favorite track may be “Pensamiento” which is a nice Latin influenced rock fusion piece with Stills providing some stellar piano work.

Down The Road remains very representative of early seventies rock. It may not be a masterpiece but it is very good. It was also a farewell to one of the better bands of its time.
by David Bowling 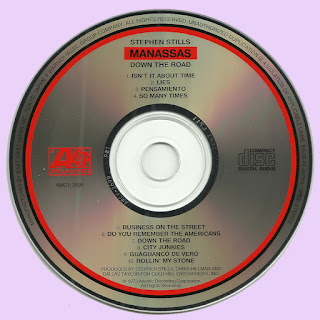 Free Text
the Free Text
Posted by Marios at 5:16 AM 4 comments: