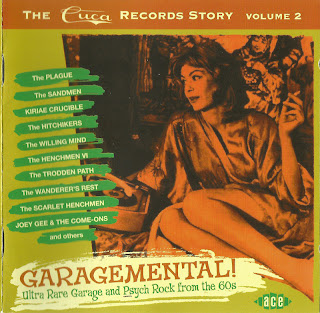 The history books will tell you all you need to know about the great recording centres of the past such as Nashville, New Orleans, Memphis and Chicago, as well as the hit factories of New York and Detroit. By contrast, there are parts of America that hardly figure at all in the annals of rock‘n’roll, and the farming state of Wisconsin in the upper mid-West is one of them. It is the state rock‘n’roll forgot, more famous for the breweries of Milwaukee and for its dairy produce.

Amid this oasis of indifference, Jim Kirchstein set up a small studio-cum-label-cum-workshop which came to dominate the South Wisconsin scene for a decade without the benefit of publicity or even very many hits. Several hundred singles ranging in style from rock to country to polkas were released on Kirchstein’s Cuca label and its subsidiaries during that time, and dozens of young Wisconsin musicians owed him their start.

Located on the Wisconsin River, about 25 miles northwest of the state capital Madison, Sauk City could not have been further removed from the mainstream of the record business. One of Cuca’s first releases, Muleskinner Blues by the Fendermen, a rocked up version of an old hillbilly tune, caught on internationally in 1960 and, despite some legal difficulties, Kirchstein was able to plough back some of the profits into his own studio. By prudently keeping things small and manageable, Cuca gradually came into its own as its reputation as a recording locale began to spread.

Wisconsin boasted an awful lot of working rock bands, almost as many, in fact, as Merseyside in the early 60s. Wisconsin kids, weaned since infanthood on polkas, were so starved of rock that they lent their keen support to the thriving local scene and by 1962, the local rock scene had gradually coalesced. By the mid-60s, as more and more performers gravitated towards his self-contained little operation, Kirchstein even took to mastering and pressing his own records in-house.

This second release in Ace’s exploration of the Cuca legacy, taps into a rich vein of raw garage and psych rock released locally on Cuca, Night Owl, Wright and other off-shoots between 1965-69.

Bands such as the Plague, the Sandmen and the Willing Mind were by their very nature short-lived. Most of the participants were youngsters from middle-class families which placed education above the vagaries of the record business. Tellingly, most bands came together at their local high school, enjoyed a brief blossoming, before disintegrating in the aftermath of graduation. With the Vietnam conflict being at its height, the draft would also play a part in breaking up many bands.

Prospects weren’t always helped by the fact that Wisconsin was so far removed from the main hubs of the record industry. To be fair, most of the bands took a realistic view. In 1968 Mark Johnson, who played drums in the Willing Mind, a high school band from Horicon, Wisconsin (whose sole 45, Decide, can be heard here), told a local newspaper, “When a group like ours isn’t nationally or regionally known, it’s best to start with a few hundred records. A key factor to success seems to be the involvement of a distribution man. He listens to the song and if he thinks it will sell, he’ll send it to the radio stations and start it circulating. Unfortunately, distribution men are very hard to find and, so far, we’ve had to do it on our own.”

Only a handful of these relative novices were to remain in music for any length of time and, essentially, “Garagemental” offers a microcosmic glimpse into the rock bands of small town America in the years following the so-called British Invasion moving through to psychedelia. Though the influences are many and varied, they stem from the tougher end of the 60s rock spectrum.

Most of the original 45s were pressed in very small quantities and were only promoted in the immediate environs, making them extremely rare today. Add to this six previously unissued sides (including two by the legendary Joey Gee & the Come-Ons) and “Garagemental!” more than lives up to its ultra-rare tag and, more importantly, doesn’t waver from start to finish in kinetic intensity.
by Rob Finnis 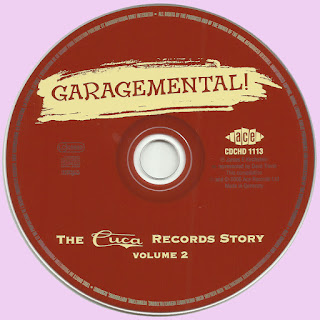