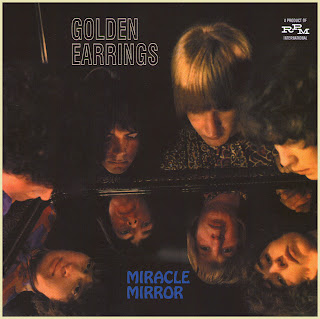 1968 album Miracle Mirror was magnificent. Consummate psychedelic pop, this was as good as anything coming from Britain, yet it escaped attention beyond the Netherlands' borders. A US release of the album got hardly any attention. Yet, five years later - as Golden Earring - the band would be soaring worldwide with Radar Love. Finally, this musical landmark is receiving a CD release outside the band's native Holland.

The third Golden Earrings album marked their creative peak to date. They had first hit the Dutch charts in 1965 and already had two classic albums behind them - ig65's Just Earrings and 1967'$ Winter Harvest, both also reissued by RPM International. Yet somehow they had escaped attention outside the Netherlands. They would break through internationally after their first US tour in 1969 and then they became Golden Earring. In 1973/4 they scored a massive international hit with Radar Love.

Back in 1968 they were fashioning world-class psychedelic pop, showcased on Miracle Mirror Supplemented by the band's contemporary singles, this reissue is very special. One listen and it's obvious why. The first Golden Earrings single of 1967 had been In My House, a :ra;* extracted from their January album Winter Harvest. Although a hit it was really part of their past - a consolidation.

This was underlined by the fact that just after it left the charts the band had a new singer, Barry Hay, the former frontman of fellow Hague band The Haigs. Original singer Frans Krassenburg played his last show with the band in July beginning National Service. Hay first took the stage with the bane - August. Muziek Express magazine noted 'Barry is a native Englishman and though it has been 10 years since he first came to the Netherlands, he still speaks better English than Dutch.'

Despite the fact that the new line up - Jaap Eggermont (drumsX Rinus Gerritsen (bass), Barry Hay (vocals, guitar, flute) and George Kooymans (guitar) - had been settled on, their next single was transitional: both Hay and Krassenburg appeared on Sound Of The Screaming Day, even though the lead vocal was by guitarist and songwriter George Kooymans. Hay did play flute though (he is seen on vocals in the promo film aired by Dutch TV). Krassenburg was limited to backing vocals and didn't appear on the single's sleeve. More straightforwardly, the B-skJe, She Won't Come To Me, was sung by Hay.

It was Kinks-ish commentary on workaday life that effectively built layers of instrumentation over its circular melody. Barry Hay's debut outing, She Won't Come to Me, was moodier, with a late night feel. George Kooymans told Muziek Express 'Barry sings fantastic, but on top of that he plays the bass and flute ver> well. That gives new possibilities. We can go many different ways' With a settled line up, The Golden Earrings spent August exploring those new and different ways in accommodation rented from the Circus Boltini (a famous traveling circus in Holland), writing material for their new album.

Although in keeping with the flowers and love vibe of 1967, The Golden Earrings hadn't submerged their tendency to fashion a direct melody and used instrumental arrangements that served, rather than buried, the song. It was another triumph, and - of course - another massive hit. The more introspective flipside, I Wonder Preview Together We Live And Love, would, for a lesser band, have been a fine A-side. Watch out for the A-side-referencing coda that suddenly appears at the end of the song.

The year ended with a celebratory New Year's Eve show at The Hague's Club 192, the venue run their manager Jacques Senf at which they had established themselves in 1965. The year also ended with Teenbeat magazine previewing the album that would become Miracle Mirror. 'It is going to be a superb record,' said Rinus Gerritsen. 'We use many, many guitars: piano and organ only where it is absolutely necessary. We are working with new sounds, but all the effects and experiments we do as much as possible with the guitars, so we can do the same when playing live. Many groups nowadays do something different because they're in the hit parade, by using oompah bands and children's choirs, we prefer not to do that.'

It's intriguing that Gerritsen made a point of explaining that the songs could be played live. Although the post-Sgt Pepper world allowed for studio trickery, The Golden Earrings were making sure their arrangements weren't so far out as to be unreproducable. Listening to Miracle Mirror, the success of the balance between ambition and the practical is clear: although definitively psychedelic pop with no shortage of modeishness, there's no loss in contemporaneous sonic texture.

Recorded at The Hague's GTB Studios, the album was completed at Hilversum's Phonogram Studios, where wind instruments and violins were added (arranged by Frans Mijts, who had also co-written songs for Delft band The Tee-Set). Miracle Mirror was mixed at Phonogram and issued in January 1968. A classic of the era, the album was as masterly as The Zombies' Odessey And Oracle, and The Hollies' Butterfly. The urgent opening moments of The Truth About Arthur make it immediately clear that The Golden Earrings were using the good time vibes of the era as the jumping off point for something darker.

Walking through the bar room of the dead' were hardly lyrics for the love and kisses crowd. Indeed, Miracle Mirror evinced an attractive sense of melancholy, both melodically and lyrically. Circus Will Be In Town In Time might have been influenced by the band's stay at Circus Boltini, but it is was suffused with yearning and melancholy.

Album track I've Just Lost Somebody - hardly a light number - became a single in March. Talking about the song, Rinus Gerritsen explained that 'in those days you also had Paul and Barry Ryan, who made this kind of film music with a lot of orchestral music. Our arranger Frans Mijts was the perfect man for this kind of orchestration. First George played it to us on the acoustic guitar and then we recorded it. The tape then went to Mijts, who wrote the orchestra score.

This was then added to in the studio, and then it became apparent that we had a kind of overkill in the wind section - Mijts was originally a trumpet player, so it figures. Half of it was then left out and there we had a song that remains untouched by the passing of time.' He also said that the song had originally composed by George Kooymans for Henk Smitskamp, the former bassist of rival Hague outfit The Motions, but producer Freddie Haayen said it was so good that they shouldn't give the song away. Its chart Dosilion of seven showed that Haayen was right.

Although Miracle Mirror was issued in America by Capitol Records and I've Just Lost Somebody became a British single for the Major Minor label, The Golden Earrings weren't getting much attention beyond the Netherlands. That soon changed. The band formed its own production company, Red Bullet, in 1968, scored its first Dutch number one that year, toured that States for the first time in 1969 and became Golden Earring. Dates with the MC5 and Led Zeppelin emphasised that they were looking forward: building on what they'd learnt during the '6os.

The culmination was Radar Love, the proof to record buyers everywhere that they were a world-class band. But everyone in the Netherlands already knew that.
One listen to Miracle Mirror is testament to that .
by Kieron Tyler, March 2009 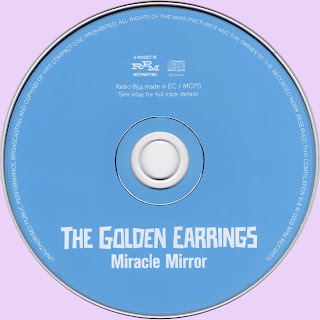