Various Artists - The Sound Of Young Sacramento (60's us, lightning flashes of brilliance from the golden state) 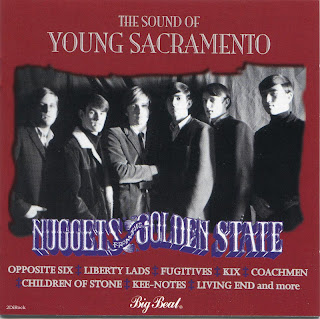 The mid-1960s rock scene in Sacramento may appear isolated and insular especially when compared to the activities of the neighbouring San Francisco Bay Area, but its teenage audience was as partisan as any other across the United States in those halcyon days. Major acts like the Stones and the Byrds played Sacramento before they ever properly visited San Francisco-.-on their rare stateside visits, the Hollies and the Zombies avoided the Bay Area altogether, heading straight for Sac. The hip programming of the city's two AM power-houses KROY and KXOA fuelled the teen market, whilst savvy promoters exploited it to the max. And there were hundreds of local garage bands ready to cater to the massive, restless audience in the city and its environs.

Five years of sleuthing have gone into the preparation of The Sound Of Young Sacramento, the latest volume in the Nuggets From the Golden State series, which focuses on the very best teen garage and folk-rock groups that visited the Bill Rase Recording Studio & Talent Centre from 1965 to 1967. Bill's modest operation in those years gave these teenage combos an affordable outlet with which to immortalise themselves on wax, and as a result many bands beat a path to his Franklin Boulevard door.

Rase custom-pressed singles for the acts to sell at their shows, often in batches of a few hundred or less, resulting in some captivatingly rare releases. Included here are several records that are acknowledged punk classics, such as the superbly snotty I'll Be Gone by the Opposite Six and the psychotic surf of Too Much Loving by Dixon's Liberty Lads. Also featured are the, lesser known yet no less worthy, records by the Children Of Stone, Hustlers, Kee-Notes and others. There's Brit-Invasion sounds from the Coachmen and cryptic minor key moodiness from the Living End and the Night.

Unlike so many other studios, Bill Rase meticulously archived all his master tapes from the period, and close examination of these has thrown up further unreleased and quite astounding gems of a punk and folk-rock variety. We therefore proudly present several previously unissued ear-opening cuts from both popular Sacramento groups like the Psy-Kicks and Fugitives, and hopelessly obscure high school combos such as the Mergers, Chelsea Sidecar, Kix and Goodtime Music Co. The high standard and idiosyncratic sound of all the recordings featured makes this an exceptionally strong and listenable compilation.

In addition, the diligent research for the project required tracing members of each act featured, which in turn uncovered a wealth of facts, photos and memorabilia, cramming the booklet with an authoritative history of both the groups and the scene from whence they came. After widely-acclaimed releases in the Nuggets' series from Sacramento-related groups like Kak, the Oxford Circle and She, The Sound Of Young Sacramento continues to mine the motherlode of great rock'n'roll from the mid-1960s heyday of California's capital.
by Alec Palao 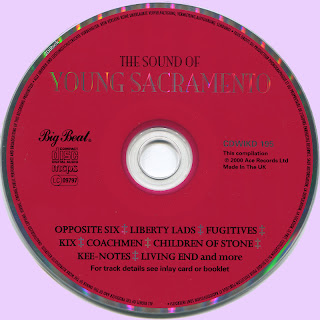 Free Text
Text Host
Posted by Marios at 8:49 AM 15 comments: