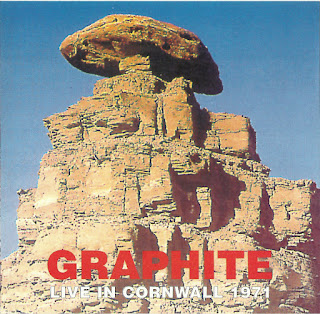 This is the only known live recording of Graphite, The 1/4" master tape from which the live material was taken was in poor overall condition having been partially erased and generally worn. Originally recorded with duff microphone leads on either stereo channel, the first three tracks suffered from intermittent interference and have been reconstructed as best as possible, necessarily in mono, whilst also being slightly enhanced to compensate for the missing channel.

The band were among the opening acts to perform at the Tregye Festival of Contemporary Music near Truro in the summer of 71, yet still gained a notable billing above Queen! Also performing, were various other interesting progressive outfits of the day, including Tea & Symphony and Indian Summer. Unfortunately, we were not able to turn up any live material by any of the other groups from this occasion!

The festival headliners were Arthur Brown's Kingdom Come, plus the ubiquitous Hawkwind. The full roster of acts can be seen on the original poster of the event, reproduced here courtesy of Dave Hook's personal archives.

Such festivals were an integral part of the burgeoning underground scene of the early 70's enabling many obscure acts to reach a wider and differing audience of musical appreciation. Graphite appeared at many similar events and despite the limited sound quality, this recording serves as a significant reminder of the unique vibe and mellow atmosphere that prevailed at many such festivals in those days.

After this rare live set, we have added too bonus studio cuts, both previously unreleased. Firstly, a gritty rendition of Pink Floyd's 'Astronomy Domine', recorded by a three-piece Graphite during 1970. followed by one of their most popular songs, 'Chestnut Loke'. being a longer version with a somewhat different mix from the title track of their previous Audio Archives CD
CD Liner Notes 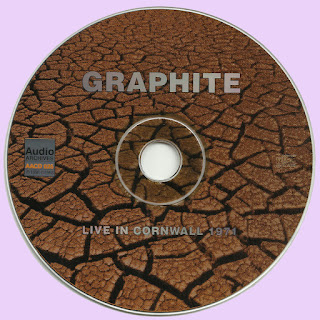 Free Text
the Free Text
Posted by Marios at 6:16 AM 2 comments: