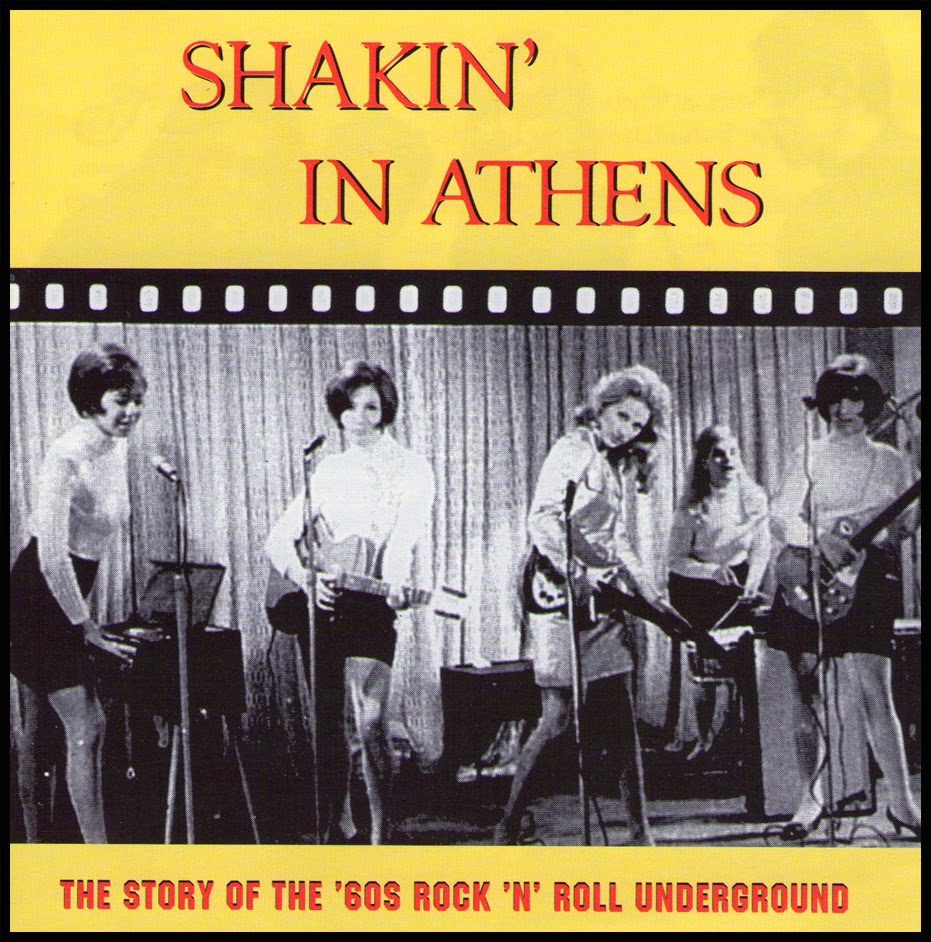 It’s very difficult to describe in only a few words the history of such a rich and underestimated pop-rock scene as existed in Greece in the sixties. This is especially true when this scene has been represented so poorly in the world of CDs, despite the glut of recent reissues. There have been a seemingly endless stream of compilations from the most obscure places on the planet, produced primarily, it seems, because those places are exotic and outrageous geographically, not because of the value of their music.

The classic beat/garage scenes of the UK, Holland, Germany, etc. have been exhausted, with the best 45s out (again and again), and the fans of this music numbed by the saturation approach of most reissuers. Now the time is ripe for all fans of beat/garage music to focus on the Greek scene, which up until now has languished in the dark shadows that could only result from sunshine so bright. Those fans, (and hopefully you who are reading this are one of them) will discover a unique sound— not just faithful mimicking or the typical European imitation of the American garage sounds! It all started in 1965 with the release of "Geronimo Yanka" by Forminx, an arrangement of a traditional Finnish song. In one year, this single sold more than 60,000 copies (!) and became the national anthem of every Mod teenager in Greece.

With Forminx (featuring future international superstar Vangelis Papathanasiou) now firmly established as the Beatles of Athens, other groups sprouted up from every neighbourhood, from every one of the many dark corners in Athens to try to make their mark. Many of these bands such The Idols contributing to the collection with two songs and including the most famous band member, Demis Roussos  with great international career later, with Afrotide's Child and as a solo artist,  The Juniors whose most members die in a car accident, while the remaining members - one week after the accident- played in a live show -in honor of deceased friends-  with a young English guitarist who was dressed in black and his name was..... Eric Clapton!!

Noticeable is also the sound of the Zoo, a band that is rumoured that they were mostly students of American College of Athens,  while the Bluebirds for many of critics and not only- is the most important Greek Band of their time, having released 13 singles. But not many of the bands  were able to sign contracts with a label, except for the big names (Forminx, Olympians, Idols, Bluebirds etc.), the overwhelming majority of those groups were happy just to cut a single. After a few practice sessions, they would head for one of the very primitive local studios. These studios, tailored to record traditional Greek bouzouki music, supplemented their income by recording the wave of enthusiastic young musicians.

Techniques were extremely primitive (cardboard egg holders nailed to walls for acoustic panels, etc.), and the pressings were very small (approximately 100-200 copies), but the excitement was real. If the single became a hit (!) the group would cut an additional 500-1000 copies (a rare occurrence). With such small pressings, imagine how difficult it is now, more than thirty years later, to find copies of any of these singles in good shape. Within the next couple of years, a very active and respectable scene managed to develop and flourish. It was an underground phenomenon (there were no magazines devoted to the music scene), fueled by imported music, and the relentless enthusiasm of Rock and Roll aficionados.

Thanks to U.S. Armed Forces Radio (there were more than 5,000 American troops stationed in Greece), beat/garage fans were informed on a daily basis of the U.S. top ten. At night, on Greek radio, programs presented label showcases (Parlophone, EMI, etc.)— game shows that involved top ten songs, but also promoted independent Greek Rock and Roll groups. Occasionally, drawn by the prospect of Greek sunshine, European musicians visited and taught their Rock and Roll secrets to the hungry young musicians.

The influence of British and American rock (via songs like "Shake, Rattle and Roll" and the Swingin' Blue Jeans' "Shakin' All Over") produced the "Shake," a dance like the Twist, which became hugely popular in Greece and Italy. Unlike the north areas of Europe, which embraced R & B, the Greeks and Italians along the Mediterranean preferred the stirring sounds of Rock and Roll. "Shaking" became a part of the local talk, and parents feared that their darling children might go and "shake at the disco" or "shake at the club," instead of studying to become doctors, lawyers, or architects. For roughly three years (1964-'67), it was "shaking" that dominated the club scene, and "shake" that dominated the music.

This all but ended on April 21, 1967 when a junta took over the Greek government. Along with other political restrictions during the junta rule (1967-1974), they chased away all the long-haired Rock and Roll lovers, and concerts were prohibited (especially those with English lyrics). The Rolling Stones were allowed to come in 1967, but the concert was a disaster as fans nearly rioted in protest against the restrictions of the junta. The whole music scene collapsed. Certainly the development of Greek pop/rock music would have been very different if the political situation had not been repressive. But even under the pressure of those severe circumstances, many musical diamonds were created. 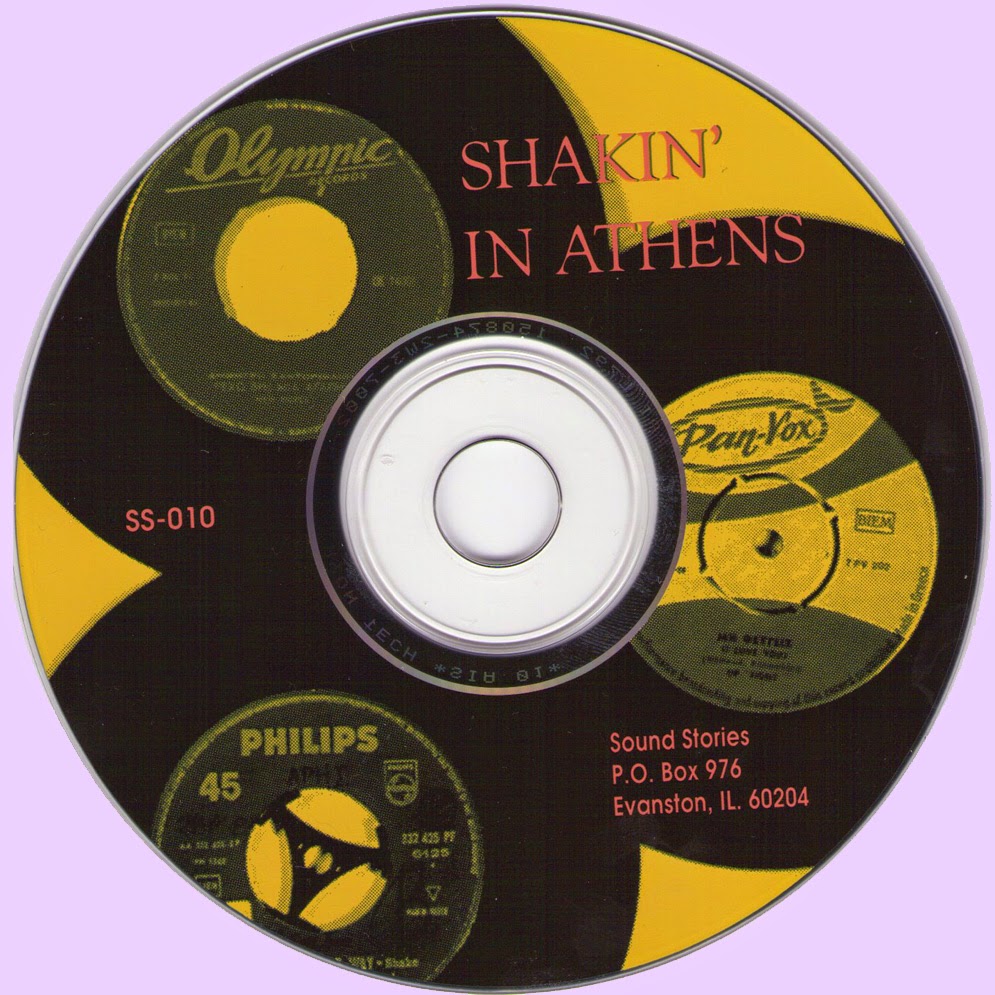 Free Text
Just Paste
Posted by Marios at 9:48 AM 5 comments: