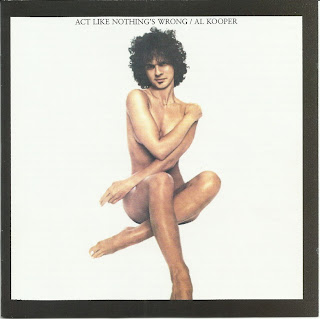 At the time of writing this sleeve note - July 15th, 2008, to be absolutely precise - rock and roll is well into its sixth decade, and like most of us, I guess, it's a bit torn and frayed around the edges, but still slugging away. Of course, like the history of anything, rock and roll is not just about the trailblazers and the mavericks - it's as much about those who made telling contributions without necessarily scaling the vertiginous heights of commercial success, or courting notoriety or controversy.

Those musicians and performers who have just got on with it, occasionally percolating up to a broader level of success and visibility, without necessarily troubling the 'best seller' listings with any great consistency. Anyone with a half-decent record collection will own numerous albums by bands and soloists who never quite made the grade, but who have bequeathed a legacy of music that makes one's day to day existence that little bit more worthwhile. This preamble is a somewhat roundabout way of getting to the subject of this excellent reissue - one Al Kooper.

The history books tell us (they tell us so well) that Al Kooper provided the distinctive Hammond organ flourishes that helped characterise the 'wild mercury' sound of the epochal Bob Dylan opus, Like A Rolling Stone. Further exploration also reveals that it was Kooper who set the late sixties / early seventies behemoth that was Blood, Sweat And Tears in train. That's pretty good for starters, (and forgive me if I'm telling you something that you already know) but it was Kooper who was instrumental in shaping the early recorded works of the Southern Rock institution that is Lynyrd Skynyrd, the debut album by Phoenix, Arizona shock-rockers The Tubes, and even lent his considerable keyboard skills to such classics as The Rolling Stones You Can't Always Get What You Want, Rael by The Who (It's on their wonderful Who Sell Out album, and was the basis of the track The Underture on Tommy), and Long Hot Summer Night by Jimi Hendrix (it's on Electric Ladyland).

There's more to Kooper than this, though, as if that were not enough. Born in Brooklyn, New York, in 1944, Al Kooper's musical career can be traced right back to the original rock and roll era of the late 1950s. In 1958, he was a member of The Royal Teens, who had a top five US hit single with the novelty Short Shorts, followed up a year later with the US top thirty hit, Believe Me. (Some readers of this note with similarly fly-paper like memories as your author may recall that the UK's very own Freddie & The Dreamers once performed a version of Short Shorts on something like Sunday Night At The London Palladium, a long-running UK variety show).

In the biography on his own website, Kooper recalls of his tenure with The Royal Teens thus: "I was hanging around the fringes of the music business...playing sessions on guitar. People would hire me because their only alternative was to hire these Jazz players to play this teenage music. These guys were smoking cigars, emulating what kids would play. So, they would hire me to get that 'dumb, kid sound'. I assume that's why I was hired, because I really couldn't play anywhere near as well as those other guys." Although Kooper makes a modest appraisal of his guitar playing talents here, he clearly had a certain musical something that was in great demand; he went on to play scores of sessions for 'dumb, kid' records, and started to build a considerable playing reputation - these days, it'd be called 'networking'.

He offered this observation of that particular era: "It was a very educational time of my life. I learned how to read and write music for the studio. I made friends with the players. They were all very nice to me - with some exceptions. I didn't claim to be up on their musicianship, but it was a great university. The difference between the first time and the fifth time I was on a session was immense. The first time they should have thrown me out, but I was lucky!" In addition to honing his musical chops, Kooper also served time learning about the engineering of studio recordings - a somewhat subtle, even esoteric art that is largely under-appreciated, even this long into the rock and roll game.

At the same time, Kooper also joined up with the songwriting team of Bob Brass and Irwin Levine - the union yielded one massive smash hit in the shape of This Diamond Ring, for Gary Lewis & The Playboys (Lewis was the son of US actor / comic Jerry Lewis). During this period, Kooper befriended the record producer Tom Wilson, who invited Kooper to a Bob Dylan session. By the end of that afternoon, Kooper had ensured his place in rock and roll history by making his stellar organ contribution to Like A Rolling Stone, without ever having played organ before.

Thus began a working relationship with Dylan that has endured throughout the years, Kooper producing Dylan's New Morning album, and many offers of session work: "I'd get tons of calls - some of them, I didn't even want to do, but I didn't want to say no. So, I'd just charge them triple scale, thinking that would deter them - it didn't." Also on the session was the great Mike Bloomfield on guitar, and he and Kooper started a friendship that continued from that point until Bloomfield's premature death in 1981. Out of this relationship came the million selling Super Session album (along with Stephen Stills), and the in-concert album The Live Adventures of Mike Bloomfield & Al Kooper.

By this time, Kooper had been a member of The Blues Project, formed and left Blood Sweat And Tears, and had taken up an A&R role with the CBS label (One of his signings to the label was the classic Brit 60's pop band The Zombies, who recorded their classic Odessey And Oracle album for the label). Throughout all this activity, however, Kooper still managed to sustain an active solo career. Of course, back in those days, major labels still held true to the notion that an artist or band should be allowed to develop their career, and, if sales were positive enough, they could make several albums without necessarily feel the trapdoor opening beneath their feet. Kooper's solo albums, whilst never really troubling the rarefied upper echelons of the sales ledgers, nonetheless were almost all absorbing, musically varied, artistically satisfying and entertaining affairs.

Here's where I contradict myself, however, because the album you should be playing now - Act Like Nothing's Wrong, was originally released in 1976, and was his sixth solo album proper, and his one and only album for the United Artists label. There again, things were starting to change in the music business; although it'd be some years before Punk and the New Wave made it's presence known in the US, the American music business was starting to look flabby and middle-aged.

The era was dominated by mega-platinum selling acts like The Eagles and Fleetwood Mac - hi-gloss, slick packages that didn't leave much room for the spiky, uneven and very-muchhis- own-man types like Kooper. He starts off proceedings with both a musical look back, and an artistic look forward, by reprising the aforementioned Gary Lewis & the Playboys hit, This Diamond Ring. However, Kooper reworks the song with a fine feel for that great mid-70s US Funk sound. He sounds like he's having fun; he takes on Southern Soul / Pop chestnuts like Dan Penn and Spooner Oldham's Out Of Left Field and William Bell's I Forgot To Be Your Love like a feisty middleweight, and it works.

He ropes in pals like the ubiquitous Tower of Power horns, guitarists Little Beaver and Reggie Young to weigh in here and there, and the results are confident and assured. There's even some horn arrangement assistance from Hollywood's Dominic Frontiere, he of the theme from Rat Patrol, The Outer Limits and The Invaders (altogether now: "A Quinn Martin Production"!), and Act Like Nothing's Wrong is sounding like a cool, confident and worthwhile addition to the Kooper canon and your record collection. So what if Hollywood Vampire overstays it's welcome a tad? It's quality gear, all in all. As the saying goes, you can't keep a good man down. Kooper has recently published an update to his hugely entertaining memoir, entitled Backstage Passes and Backstabbing Bastards, has nearly lost his eyesight, but remains a brilliant one-off, whose presence on the earth makes us all feel a bit better about being human. Long may he run.
by Alan Robinson, July 2008 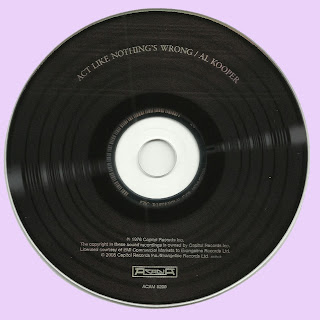