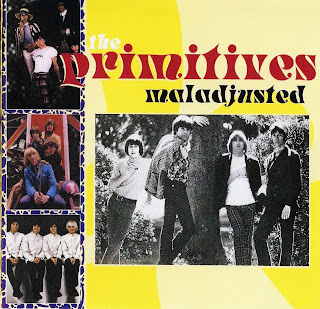 Like most of their equally obscure mid-60s R&B/freakbeat brethren, THE PRIMITIVES are principally namechecked these days for the value - both in fiscal and artistic terms - of their vinyl legacy. Their trio of singles for the Pye label, the Italian-only album Blow Up and a unique-to-France EP currently have a combined value on the collectors circuit of over £1000, an accurate representation of their standing amongst freakbeat connoisseurs.  But while their records have long been coveted by 60s collectors, the story of the Primitives has remained shrouded in mystery, with only vague rumours ci rc u lati ng about the relationship between the band's early UK career and their subsequent exploits in Italy.

Maladjusted rounds up their work during this 1964-67 period, featuring everything from those previously-mentioned releases plus an alternate version of the French EP's lead track, 'Oh Mary', the entire Blow Up album and a couple of related solo 45s from the group's long-term frontman Mal Ryder who, along with early fan John Taylor, has provided invaluable help in piecing together the legend of the band.

The Primitives evolved in 1964 out of British beat boom hopefuls The Cornflakes (previously known as The Rising Sons), whose typically cheesy post-Beatles handle didn't prevent them building up a sizeable fan base on the Oxford live circuit. As the Cornflakes, they won the Plaza Cinema beat group contest in Northampton, a competition that proved to be of twofold importance in their embryonic career: the contest's first prize was a two-year contract with the Pye label, while Cyd Cipin, who ran the local Plaza, was so impressed by the group that, in conjunction with his brother Mayer and their associate Leslie Jaffa, he became their manager.

While The Primitives were experiencing the slings and arrows of outrageous fortune, a teenage rock'n'roll fan by the name of Paul Bradley Couling had been invited to rehearse with The Meteors, who also worked the Oxford iive circuit. Accepting their invitation, Couling quickly began to attract attention as The Meteors' frontman, and he was duly approached by prominent local band The Beatniks, whose lead singer Peter Cox had just been called up for National Service. Couling didn't need to think twice about accepting their offer: he left The Meteors, his job at the Southern Electricity Board, Oxford and his old identity behind. Adopting the stage name of Mal Ryder, he and his new colleagues - by now rechristened the Spirits moved north to Doncaster, appointing Martin Yale (who also handled Hull R&B band The Rats and Sheffield's Joe Cocker) as their manager.

Yale helped Mal Ryder and The Spirits find work in working men's clubs, but his influence was most apparent in brokering a recording deal. With the aid of future Tom Jones producer Peter Sullivan, two singles were cut both for Decca and Decca's Vocalion Pop labels: 'Cry Baby' / 'Take Over' (Decca F 11669, June 1963) and 'See The Funny Little Clown' / 'Slow Down' (Vocalion V 9219, May 1964). When these failed to garner attention, the band changed managers, the London-based David Stones setting in motion a move to Pye subsidiary Piccadilly. That led to the November 1964 release, 'Forget It' b/w 'Your Friend' (a Marty Wilde song), and a follow-up single - the Carter/Lewis composition 'Lonely Room' (also recorded by Carter/Lewis's own band, The Ivy League) backed by 'Tell Your Friend'appeared as a Mal Ryder solo single in April 1965.

Stones also arranged for the group to follow the well-worn UK/Germany export route, including a stint on the Storyville Club circuit that found The Spirits playing for up to six hours a night. Exhausted by their schedule, The Spirits fulfilled their contractual commitments in Germany before returning to England in spring 1965, when they promptly split up. As stressed as the rest of his former colleagues, Mal Ryder went back to work with his father on building sites, his hopes of pop stardom apparently over.

The Primitives stayed with Mal until the early 70s, by which stage their line-up had gone through several changes. Pick Withers returned to England, playing with various low-profile progressive acts before finally hitting paydirt in the late 1970s with Dire Straits. His replacement in The Primitives, Scottish-born drummer Robbie Mcintosh, came to the group from the Brian Auger Trinity before going on to international success with the Average White Band, though he died at a tragically early age in 1974. A more pivotal Primitives member, Jay Roberts/Jeffrey Farthing, is also sadly no longer with us, having died of an overdose in the 1990s.

The late 60s line-up of the Primitives continued to contribute to Italian albums like "Sua Eccelenza" and "Mal Dei Primitives", but their musical output had become increasingly erratic. Sparkling psychedelic performances of 'Dear Mr. Fantasy', 'Race With The Devil' and the Small Faces track 'Song Of A Baker' were buried cheek-by-jowl alongside such mainstream fare as 'Love Letters In The Sand', 'Somewhere Over The Rainbow' and 'You'll Never Walk Alone' as Mal opted for the traditional showbiz route. For that reason, our anthology ends in 1967, thereby capturing both Mal and the Primitives during their mid-60s artistic apex, with fire in their teenage bellies and an unshakable commitment to the life-affirming qualities of raw, belligerent, adenoidal British R&B. Maladjusted? The Primitives?!? You'd better believe it.
by David Wells 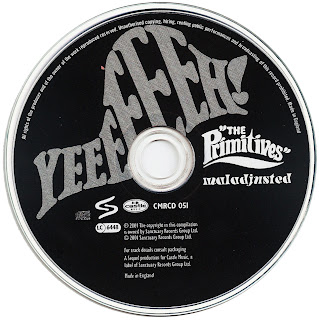