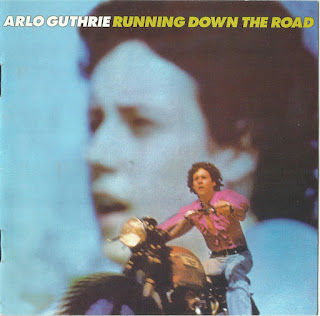 Is it possible to be a one-hit wonder three times? The question is provoked by the recording career of Arlo Guthrie, which is best remembered for three songs in three different contexts. There is "The City of New Orleans," Guthrie's only Top 40 hit, which earns him an entry in Wayne Jancik's The Billboard Book of One-Hit Wonders. There is also "Coming into Los Angeles," which Guthrie sang at the legendary Woodstock music festival, and which featured prominently in both the Woodstock movie and multi-platinum soundtrack album. And there is "Alice's Restaurant Massacree," the comic-monologue-in-song that gave him his initial fame and took up the first side of his debut LP, the million-selling Alice's Restaurant. Whether these successful tracks make him a one-, two-, or three-hit wonder, they were arguably both flukes in a performing career that was still going strong a full 40 years after Guthrie first gained national recognition and facilitators of that career. With their help, he spent 15 years signed to a major record label, charting 11 LPs, after which he was able to set up his own label and go on issuing albums. More significant, he maintained a steady following as a live performer, touring worldwide year after year to play before audiences delighted by his humorous persona and his musical mixture of folk, rock, country, blues, and gospel styles in songs almost equally divided between his own originals and well-chosen cover tunes.

Arlo Davy Guthrie was born July 10, 1947, in the Coney Island section of the borough of Brooklyn in New York City and grew up there. He was the fifth child of Woody Guthrie, the famous folksinger and songwriter, but the second child born to his father's second wife, Marjorie Greenblatt Mazia Guthrie, a former dancer with the Martha Graham dance troupe who had become a dance teacher; his older sister, Cathy Ann Guthrie, had died in a fire at the age of four five months earlier. After having two more children, Joady and Nora, Guthrie's parents separated when he was four and later divorced; his mother remarried. His father remained an important presence in his life, however, giving him his first guitar for his sixth birthday in 1953. By then, Woody Guthrie had been diagnosed with Huntington's disease, an incurable, hereditary illness; he was hospitalized permanently in 1954, and Guthrie's mother supervised his care.

Guthrie grew up surrounded by his father's friends, including such folksingers as Pete Seeger and Cisco Houston. (Houston brought him up on-stage at the Greenwich Village nightclub Gerde's Folk City for an impromptu performance when he was only ten.) Guthrie later said that he had been unaware of his father's fame until he switched from public school to a progressive private school in the sixth grade and found that students there were singing Woody Guthrie songs like "This Land Is Your Land." Only then did he begin learning his father's music. Nevertheless, he did not expect to become a performer himself, feeling that his introspective personality was not suited to such a career. When he graduated from high school at the Stockbridge School in Massachusetts in 1965, he enrolled at Rocky Mountain College in Billings, MT, to study forestry with the intention of becoming a forest ranger. He dropped out after only six weeks, however. Returning to Massachusetts, he stayed at the home of Alice and Ray Brock, a deconsecrated church. The Brocks were former faculty members of the Stockbridge School who had opened a restaurant called the Back Room. Celebrating Thanksgiving with them, Guthrie and his friend Rick Robbins undertook what he later called the "friendly gesture" of attempting to dispose of a large amount of accumulated garbage for them. Finding the city dump closed, they threw it down a hillside. As a result, they were arrested for littering. Convicted of the offense, they paid fines of $25 each and retrieved the garbage. This proved fortuitous shortly afterward, when Guthrie was summoned for the military draft and judged unfit for service because of his criminal record.

Guthrie took up performing, turning professional in February 1966 with a debut at Club 47 in Cambridge, MA. His repertoire included a 16-bar ditty he had written that constituted a musical commercial for the Brocks' eatery, with a chorus that went, "You can get anything you want/At Alice's restaurant." The song, however, was the least of the performance, as Guthrie told a fanciful and comic version of his adventures in littering and at the draft board, spinning it out to what amounted to a 20-minute comedy routine with a tune wrapped around it. He performed what he called "Alice's Restaurant Massacree" (idiosyncratically pronouncing the last word "mas'e-kree" instead of "mas'e-ker," hence the extra "e") at Carnegie Hall as part of a folk song festival sponsored by New York radio station WNYC, and another local station, WBAI, began airing a tape of the song in the spring of 1967, to popular response.

Guthrie attended the Newport Folk Festival and found himself promoted to the closing-night concert on the main stage, performing "Alice's Restaurant Massacree" to 20,000 folk fans on July 16, 1967. That provoked interest from Warner Bros. Records, which signed him and issued Alice's Restaurant on its Reprise subsidiary in September 1967, only weeks before Woody Guthrie's death on October 3. The album entered the Billboard magazine Top LP's chart on November 18 and rose steadily, peaking at number 29 on March 2, 1968, and staying on the chart 65 weeks. (Although the title song dominated attention, the LP also contained a second side of original Guthrie compositions including "Highway in the Wind," which was covered by Hearts and Flowers and Noel Harrison soon after, and by Kate Wolf later.)

The success of the album and of "Alice's Restaurant Massacree" went well beyond sales, however. First, it established Guthrie not only as a star, but also as a figure separate from his father, always a tricky thing to accomplish for a child following in the footsteps of a famous parent. Despite Woody Guthrie's renown as a progenitor of the 1960s folk revival, he himself did not perform after the early '50s, and his son presented a distinct, if related persona to a young audience that only vaguely recalled his father, if at all. Second, as a highly entertaining live recording, "Alice's Restaurant Massacree" immediately transformed Guthrie into a concert attraction; he came off as a wry, yet gentle and charming hippie able to puncture the pretensions of "the establishment" with comic hyperbole.

Guthrie appeared at a memorial concert for his father held on January 20, 1968, at Carnegie Hall that was later released on disc as A Tribute to Woody Guthrie, Pt. 1, featuring his performances of "Do Re Mi" and "Oklahoma Hills," and reached the charts. (A second concert at the Hollywood Bowl on August 12, 1970, produced another LP, A Tribute to Woody Guthrie, Pt. 2, on which Guthrie performed "Jesus Christ" and participated in a version of "This Land Is Your Land"; it also charted.) Alice's Restaurant was still selling when Reprise released Guthrie's second LP, Arlo, in October 1968. It was a live album recorded at the Bitter End nightclub in Greenwich Village, and it featured more of Guthrie's zany humor, along with original songs. Overshadowed by Alice's Restaurant, it peaked at number 100 in Billboard, although it got to number 40 in rival Cash Box magazine.

Guthrie agreed to have "Alice's Restaurant Massacree" adapted into a motion picture and to star as himself in the film. Veteran director Arthur Penn (The Miracle Worker, Bonnie and Clyde) was brought in, and he co-wrote the screenplay with Venable Herndon, elaborating on the song's story to create a virtual screen biography of the 21-year-old Guthrie. Alice's Restaurant the movie premiered at the New York Film Festival on August 24, 1969, to favorable reviews, earning Penn an Academy Award nomination for Best Director. Alice's Restaurant the album promptly jumped back into the charts. It was certified gold on September 29 (the same day that Guthrie appeared on the cover of Time magazine) and achieved a new peak in Billboard at number 17 on November 15. Ultimately, it spent a total of 99 weeks in the Billboard chart, and it was certified platinum in 1986.

United Artists, the distributor of the film, released a soundtrack album featuring a different, two-part version of "Alice's Restaurant Massacree" along with instrumental music by Guthrie on its record label in September. Simultaneously, Reprise released Guthrie's third album, Running Down the Road. Given this glut of product, it is striking that both albums sold fairly well. The soundtrack album peaked at number 63 (number 58 in Cash Box), and Running Down the Road got to 54 (33 in Cash Box). (Reprise also released as a one-off single "Alice's Rock & Roll Restaurant," a shortened, re-recorded version of the famous song, and it charted briefly.) Nevertheless, Running Down the Road did not attract as much attention as it deserved.

Produced by Lenny Waronker and Van Dyke Parks and featuring such prominent session musicians as James Burton, Ry Cooder, and Clarence White, it was Guthrie's first album without any comic monologues, and it combined some excellent new originals, including the psychedelic rocker "Coming into Los Angeles" (a tale of dope smuggling) and the tender ballad "Oh, in the Morning" (later covered by McKendree Spring), with covers of old folk and blues standards like Woody Guthrie's "Oklahoma Hills" and Mississippi John Hurt's "My Creole Belle." (Whether due to his own inclinations or the demanding one-album-a-year schedule of his record contract, Guthrie from this point on would cut as many covers as original songs for his LPs.) Prior to the release of Running Down the Road, Guthrie had appeared at the Woodstock festival on August 15, 1969, where, as part of his set, he performed the then-unreleased "Coming into Los Angeles." When that performance turned up in the Woodstock movie and soundtrack album in May 1970, the tune became one of his signature songs.

In October 1969, Guthrie, who had bought a 250-acre farm in Stockbridge, MA, married Alice "Jackie" Hyde, with whom he would have four children: Abraham (Abe), Annie, Sarah Lee, and Cathy. Abe Guthrie became a musician and worked with his father. Sarah Lee Guthrie also went into music and became a recording artist.
by William Ruhlmann 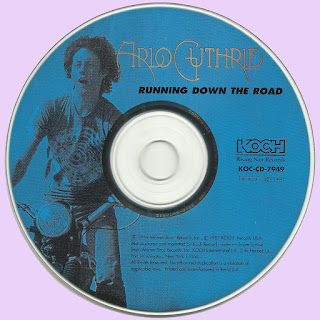