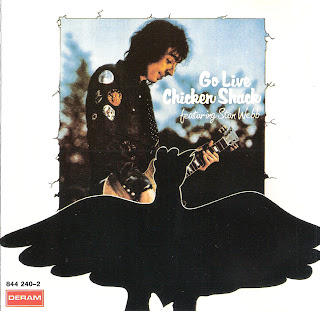 Autumn was turning to winter, popular music in general was going about its eternal metamorphosis, and on the rock/blues vine the 'progressive' movement seemed to be winning out at the expense of pure blues. For all his bravado, to close friends Stan seemed to be less than enamoured of where his efforts’ most viable future possibly lay, and Deram still l had another album due. Webb was (and happily, once more as I wtite is} Chicken Shack. The dazzling guitarist and over-the-top entertainer had to date not been captured on vinyl strutting around his natural habitat - any stage - so it was logical that the ensemble's contract be fulfilled with a live set.

The Pye Studios' Mobile Unit was booked for the night and on 26th October 1973 it travelled to the Brunei University in the West of England to preserve forever events on the boards. Barry Murray of Murray Simmonds Productions - an organisation part-owned by Harry Simmonds, manager of Savoy Brown and brother of that outfit’s kingpin, Kim - look over Neil Slaven's role as technical overseer. Stan's wry sense of humour was apparent from the outset, as he introduced the fact that proceedings were being recorded along the lines of " It's an old geezer with a Philips cassette and a couple of Vidor batteries actually " , before storming off into Everyday I Have The Blues.

Chicken Shark were in good form, and quite apart from reprising a handful of numbers from their Deram days, Webb displayed his virtuosity on a variation of the old Bert Weedon hit Guitar Boogie Shuffle - now known as Webb's Guitar Shuffle - before dosing the show with l.iitle Richard's Tutti Frutti. The band's disc outlet at home was expected to rush (he results inlo the shops, and indeed lacquers were cut, test-pressings made, and a domestic catalogue number, SML 1109) , allocated. The platter was never to sen4 li^ht of day in Britain.

Before it could be scheduled and alter only five months together, in January '74 Stan announced to the press that Chicken Shack were no more and that he would be joining Savoy Brown. Deram understandably scrapped issue plans for Blighty - their parent, Decca, held Savoy Brown's long-term disc agreement - although they'd originally intended to call Stan's now-definite finale Chicken Shack Go Live an appellation it finally bears with this CD transfer.

The Savoyians being one of London U.S.A.'s biggest earners, they were not going to 'isk possibly dissipating sales of Kim and Stan's planned new venture, so Go Live was shelved there also, but Germany and Japan ultimately ensured the Shack's farewell could be purchased by issuing Nova SDL 8008 and London K16P 9075 respectively, though signposted under the somewhat depressing end-of-everything alternative, Goodbye Chicken Shack Stan Webb and Kim Simmonds, along with a third guitarfst/frontman, Miller Anderson, plus Jimmy Leverton (Bass) and Eric Dillon (Drums) thence turned in one of Savoy Brown's finest IP's, Boogie Brothers (24th May I 974), and remained together for almost a year before Kim found himself on his lonesome once more.

With A multitude of personnel amendments and one-off recording deals littering his path throughout, the great man has remained a cherished part of the hint's scene to this day, both at home and abroad. Regardless ol who is sharing his stage, Stan Webb in top gear is a formidable sight to behold and a guaranteed treat for the ears.

This C.D. gives an indication of the quality one might expect, although the songs on offer have naturally changed. Nevertheless, how much better that this revived artefact may today be more appropriately titled Chicken Shack Go Live than the unthinkable Goodbye.
Now where did I put those batteries?
by John Tracy 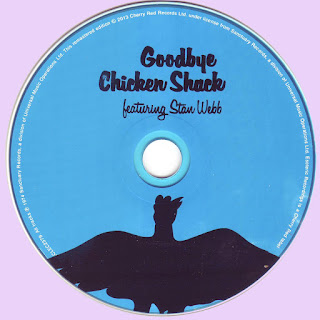