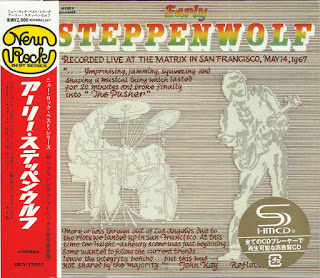 While playing the coffee houses in Greenwich Village, I ran into a fellow who was a member of a group known as Sparrow, They were a large Canadian group who at that time had failed to follow up their number one record with anything worth mentioning. On occasions thereafter I sat in with them, jammed, played harmonica, sang a few standard songs and threw suggestions back and forth with them. It became apparent that it might be a good combination if I were to join Sparrow. At that time we decided to break away from the hit parade top 4O band image.

All of us in the band were more interested in the blues- At about this time their former pianist left and was replaced by a very funny Kangaroo-style organ player by the name of Goldie McJohn. He had a very strange way of using his hands in a choppy percussive manner resembling a Kangaroo.

The Sparrow developed into a very self-sufficient band which, unlike most bands, was free of management and was doing fairly well financially. The one important thing which developed early, and has carried through all this time into Steppenwolf, was the burning feeling to make this the most important part of our lives. During this time a lot of rehearsing was done, a lot of experimenting, arranging and writing. This was a difficult period because it was hard to do your own thing when everybody in the clubs were asking for Wooly Bully, but this is the sort of thing ail bands go through We then proceeded to took for a manager and stumbled upon a man who was successful in bringing us to New York.

There we played Sybil Burton's Arthur's Club for some months. At Arthur's we were able to do our own thing and were still accepted, even without playing hit parade songs. We finally made it through that summer of sweat and toil In New York. We lived at the Hotel Albert with various other groups, such as the Blues Magoos, The Lovin' Spoonful, John Hammond and countless others.

We finally broke out of New York and went west to Los Angeles, We had a fairly successful "gig" at the Whiskey A Go Go, but we were unable to go from there due to the Sunset Strip riots. More or less thrown out of Los Angeles due to the riots we landed up in San Francisco. This was the time the Haight-Ashbury scene was just beginning to develop and the first of the San Francisco bands were starting to get national recognition.

During this time we were immediately confronted with a new freedom of musical format where digging the new musical freedoms as long as it was done with enthusiasm and belief enabling us to kind of cut a lot of ties loose and to readily get into our own thing. We were being urged on from within the group by Nicholas (Nick St. Nicholas) who was the born showman and charmer of the group. One evening at the Matrix, Nicholas proceeded to experiment, he got up on stage, picked up his bass, plugged it into an amplifier and Echo lite unit and proceeded to just play whatever came into his head. Urged on by him everyone else proceeded to get up on the stage one by one, picking their instruments.

Before we knew it we were more or less improvising, jamming, squeezing and shaping a musical thing which lasted for 2O minutes and broke finally into the PUSHER which astounded us and the audience at how well it came off. From that time on we continued to experiment with The Pusher as well as other songs.

While in San Francisco, we played the Avalon, the Matrix, and the Fillmore Ballrooms and constantly rehearsed in our house in Mill Valley. Things were not going too good for us and it looked as if we weren't going to make it. Some of us wanted to follow the current trend and, in other words, leave the musical integrity behind, but this belief was not shared by the majority. After we had our station wagon reprocessed and our finances became worse and worse we disbanded.

What happened after this is more or less well known. We got ourselves back together with the four original members of the Sparrow within a new group named Steppenwolf. Also with the addition of our fiery passionate guitar player, Michael Monarch, and our former temperamental Scorpio guitar player's (Dennis Edmonton, known as Mars Bonfire) brother Jerry Edmonton on drums. We were able to achieve the first rung on the ladder of success.

Reflecting back on the days before success, I find that the collective, passionate, almost total unjustified belief that we were going to make It some day managed to keep us together. Despite audiences who insisted on Wooly-Bully, Henry VIII and other top 40 hits of the day we made it by simply leaning against one another and hyping one another that we were going to make it. We had goals to achieve such as someday playing the Maple Leaf Gardens fn the old home town of Toronto, and to someday headline at the Whiskey.

These plateaus of success have now been realized and all of us seemed to be well prepared to accept them. Success is pleasant but perhaps, due to the fact, that most of us weren't knocked on our back by it, is the reason we are still together and not off on our own believing that we are now super-stars.

There was a unity of purpose and dedication to the music. A feeling of togetherness and support for each other, not only musically taut in dedication to each other, which made the whole thing similar to the Three Musketeers and D'Artagnian, at! for one and one for all and at! of us against the world.

If it wasn't for this 'esprit de corps' t don't think we would have made it by playing those five sets a night in clubs for weeks and weeks. Even though it may be rather trite and common to thank people on albums, I do feel that we owe a few people thanks for their continued moral support which kept the Sparrow and, later, Steppenwolf living and breathing fire to continue to play and go on.

First of all the kids at Arthur's in New York. The people at the Whiskey who gave us such a warm reception and Chet Helm of the Avalon Ballroom in San Francisco and all of the kids that came to those clubs and other clubs that we were playing. These young people have earned our thanks and gratitude as they were the ones who let us know that it was all right to do your own thing and to find a musical freedom. They did not sit there with paper and pencil ready to criticize but rather encouraged us to pursue whatever our trip was. These people, most of all, were responsible for the final stage of musical development in the Sparrow.

In closing we would like to thank very much the management of the Matrix where this album was recorded and tell you a little about it. The Matrix is a nitery in San Francisco which has supported for years the local and out-of-town talent. We played there several nights, and several recordings were made purely for fun sometimes without us knowing it, by the management who became our very good friends.

There are no parts en any of the songs that were not recorded live by the band. Many a cut may have been influenced by the fact that the majority of us were quite whacked and the vocal would drift into a mumble. But there were many inspiring moments, especially when we would improvise instrumentally like on the Pusher you will notice a mixture of musical influences ranging from the early Edgar Varese French semi-electronic symphonic School of music in the Pusher to the classical piano training of Goldie’s sort of churchy organ.

One more very important thing which ! almost have forgotten and which is close to the heart of all of us, is the Village in Toronto with all its inhabitants and up and coming musicians and people in other creative fields- It was this environment which made us feet secure and gave us a feeling of home. It was their continued support which has left a sort of warm memory of Toronto and Yorkville in particular, with all of us.
by John Kay 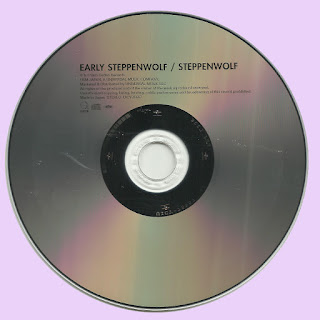 Free Text
the Free Text
Posted by Marios at 3:34 AM 5 comments: