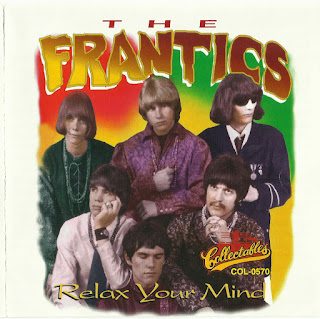 The Frantics were from the same era and area as The BlueThings the '60s and the Midwest. They were musicians from parts of Montana and North Dakota who formed The Frantics in Billings, Montana. All of them were in bands previously and some had released singles locally. They were fans of The BlueThings and the first Frantics1 single in 1966 was The BlueThings version of "La Do Da Da”, backed with "Route 66". Only 1,000 copies were pressed and today they are much sought-after by collectors.

Through 1966 and 1967, The Frantics progressed as artists. After becoming the top draw in Montana and most of Wyoming and 9outh Dakota, they became a "KOMA" band (along with The Tracers, The Fabulous Flippers, 9pider &• The Crabs, The Red Dogs and The BlueThings).

They headlined all over the country and were also second billed on concerts with The Who, The Young Rascals, The Everly Brothers, The 9teve Miller Band and other groups, including a week-long, three-state tour with The Yardbirds with Jeff Beck and Jimmy Page ("...who were real friendly when we partied with them after the concerts back at the motel") and three tours with The McCoys, during which they became friends with Rick Derringer (Zehriger). Later when fhe Frantics were based in New York City, Rick, in his first role as producer, produced some demos tor them (including the first recorded version of "Just For A While").

The Frantics, then based out of Santa Fe, New Mexico ("The best place to be during the psychedelic days," says Kim Sherman), later moved to New York City in early 1968. They were quickly signed up with Premier Talent, one of the biggest national booking agencies then and now. The Frantics played the top East Coast circuit, including the legendary Steve Paul's "The Scene" in New York City. It was the best place for famous and upcoming groups to perform and jam after hours. Steve Paul liked The Frantics and they got to play there a lot. On off nights or after other gigs in town, they would go back to The Scene, where Steve would always let them in for free to watch other groups.

Says Kim, "Jimi Hendrix would often come down to The Scene and jam with other great musicians like B.B. King and Rick Derringer. Some of us also jammed with Jimi. One night Jim Morrison got up on stage with Jimi and literally screamed into the mike in a drunken stupor, fell down and had to be carried out."

The Frantics tired of the East Coast weather and rat race and after a tour of Florida they moved back to New Mexico. They rented two houses in the mountains around Ruidoso. They went out on weekends playing around New Mexico, Colorado and West Texas and spent the rest of the time jamming in their rehearsal house and working up more original songs.

This CD, a result of those jams, was recorded at Norman Petty’s legendary 4-track studio in Clovis, NM during a week's time. All of the songs were performed live with the exception of "She", which was too psychedelic to be played live. Some of these songs were later re-recorded and appeared on The Frantics' official 1970 album.

The Frantics then moved to Colorado Springs, CO, becoming the top local Colorado draw before relocating in 1969 to Los Angeles where they felt their psychedelic/hard rock frame of mind and stage show would be better suited to pursue their career. They shortened their name to "Frantic" and headlined at the Whiskey A Go-Go (where they were told to turn down their amps because they were so loud) and became well-known around Southern California. They signed up with manager Robert Fitzpatrick (who used to co-manage Cream and The Bee Gees) and in 1970 released their first official album which got a 4-Star pick in Billboard magazine.

Their record label, Lizard Records, was owned by Gabriel Meckler, who produced all the Three Dog Night and Steppenwolf records. Although Frantic received a $20,000 advance to sign with the label (a considerable amount at the time), the record did not sell well due to a lack of distribution. Amazingly, the album was bootlegged in Europe a few years ago and recently was also released on CD. The original album commands good money as a collectors1 item.

In 1971, after seven years, the band began to splinter and disbanded. However, half of the members stayed together and went on to create many more original songs and demo recordings, some of which got airplay on Los Angeles radio stations even though there was no record.

Their legacy continues today as most of the members are still active in the music business performing, producing and doing session work. Kim says, "During our career we had a lot going for us. We had the musicianship, vocals, songs and  stage snow, as well as the equipment, clothes, confidence and the best light show. We were also the first group in the Midwest to have roadies to set up our equipment and were probably the best group most of our audiences had ever seen. We graduated to one-set concerts and blew away all of our backing groups, as well as some major groups when we did concerts with them. Our version of 'My Generation' was so powerful that when we played with The Who, their manager, after hearing us playing it during our sound check, wouldn't allow us to perform it that night?

Kim went to Hawaii, Dennis to London, England, and the rest of The Frantics stayed in Los Angeles. Please keep in mind that the original master tapes of this demo album were lost many years ago and all that exists of that session was a very old, fourth-generation tape from which this CD was made.
CD Liner-Notes 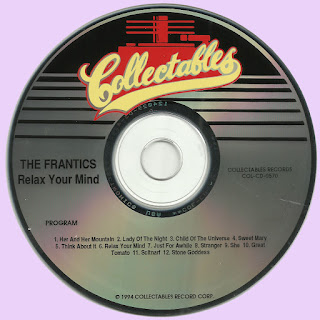 Free Text
the Free Text
Posted by Marios at 5:13 AM 14 comments: