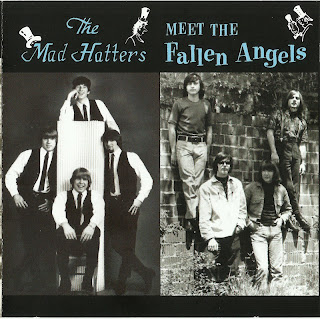 In 1965, Barry Seidel formed a music company called Traydel Productions.   The first band Seidel signed was The Mad Hatters from Washington DC.   In the course of one year the band released three stunningly great singles- “I Need Love”, “Go Find A Love” and “I’ll Come Running”, all with Dylanesque-PF Sloan sounding folk-rock songs as the b-sides.

Mad Hatter live shows were legendary as well, as is exemplified by the explosion of the amps during their electrifying medley of “Since You’ve Been Gone>I’m All Right>The Mad Hatter Theme” and their rocking version of “I Need Love”, both included on this album along with all their singles, making this the most complete collection of Mad Hatters’ material ever released.

The Mad Hatters were originally from Annapolis, Maryland and had been around for almost a year before Barry Seidel saw them one Monday night in September 1965. He went to The Roundtable (Riley Carter's Club) on M Street in Georgetown. The band did an original song written by lead guitarist, Tom Curley, called "I Need Love".

The Fallen Angels were the second band Seidel signed and they are represented by a six song set of singles and unreleased recordings from 1966.  These are the earliest recordings by the band and range from folk-rock (Pebble In My Sand, Hello Girl, I Have Found) to “Love”(Arthur Lee) type ballads (Have You Ever Lost A Love, Every Time I Fall In Love) and garage (Who Do You Love). In addition to all this excitement are two previously unreleased 1966 folk-rock Byrds sounding gems from The Loved Ones, plus a 1967 version of “I Need Love” by The Time Stoppers.  Rare photos and radio promos make this a complete trip back to 1966, when The Mad Hatters and The Fallen Angels were the two hottest bands in Washington DC and “I Need Love” mania swept the airwaves.
Cicadelic-recs 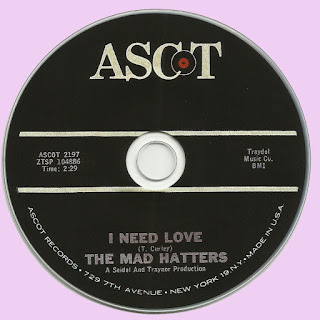 Free Text
Text Host
Posted by Marios at 10:47 AM 9 comments: