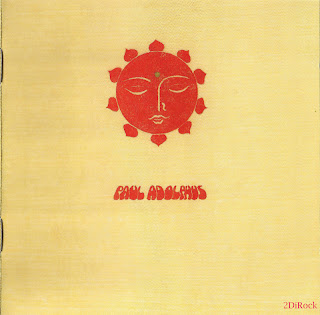 Australian born Paul Adolphus had lived before in Sweden, India and Sri Lanka. He also had a special relationship with Kyoto, Japan. Both of his first children were born there at different visits. He also came with the right feelings to the right place, which, between 1968 and when he recorded his album, in 1973, was a vibrant creative place. It was there where he met Mitsu Harada.

She contributed piano, organ, koto on his first, privately released album (only 200 were printed) and she did also the production. Recorded in a kind of living room atmosphere, some friends attending, with nature around them and an old Buddhist temple nearby, there was used a very peaceful and meditative, special atmosphere to record the album. The album luckily was recorded well.

The album starts very meditatively with sakuhachi flute, an organ drone, flute, a kind of tabla, electric piano, bass, before a voice, in colour a bit like early John Martyn or like David Thomas Broughton, most of it in English, but also with small parts in Japanese with piano and acoustic guitar, and hand percussion. The quietness swelling into the songs, sounds pretty unique to me.

Further on we hear splendid guitar work (on “It’s Raining” slightly Bert Jansch-like), nice flute improvisations, vibes, and some koto. But sometimes Paul Adolphus also falls back on more recognisable blues standards, in a lets say, Wizz Jones way of song music, less special but acceptable. This blues standard can also come back a bit more vaguely, which is more rewarding. Considering the few different variations in directions, this remains a very special album with many unique moments and a perfect starting point to make this so.
Psychedelic-Folk 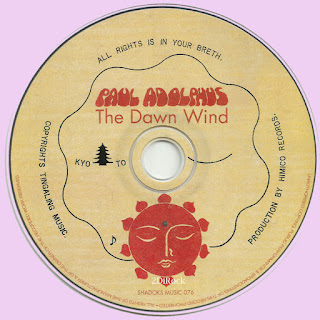 to Anon, who's one of my oldest net friends.