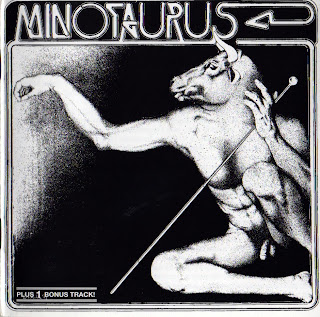 Released in 1978, Fly Away is the only released recording from the sextet known as Minotaurus: Michael Helsberg and Ludger "Lucky" Hofstetter on guitars, Ulli Poetschulat on drums, Bernd Maciej on bass, Peter Scheu on vocals, and Dietmar Barzen on keyboards. It's is a strong album, though not great, that sounds like it's from 1968, with a live, muddly feel -- the original recording, that is, not this Garden Of Delights reissue. Throughout most of the album we find parpy keyboards - organ, mellotron, etc. --, note-rich guitar playing, and some somewhat theatrical vocals? Genesis? Yes, but tweak it just a bit and think of Marillion. Of course, Marillion didn't really even exist in 1978, so the reference is anachronistic. And yet?

"7117" is a multi-movement piece composed to accompany a showing Stanley Kubrick's film of the same name in circa 1976 (though I can find no reference in Kubrick's filmography). It is a piece where the nice, melodic guitar leads and mellotron recall parts of "Supper's Ready" and "Grendel" (not the oft cited segment) or "Script?" All presented with a spacey, psychedelic vocal delivery. Like Genesis, explosive passages are offset against more pastoral passages.

"Your Dream" is a nice track, featuring many mellow, lyrical passages where guitars chime, keyboards trill, all played over a bed of mellotron, though the main feature is a very parpy keyboard and a somewhat staccato guitar line. "Lonely Seas" begins in a very subtle manner - tinkling percussion, lightly strummed acoustic guitar, and dark, almost fragile vocals. This gives way to grinding keys and slashing guitar that builds such tension you think it's going to explode. When it does, we get more of those melodic, note rich solos.

Other tracks here like "Highway" and "The Day The Earth Will Die" are closer to late 60s blues rock - e.g. Cream. In the former, searing and distorted guitar blasts alternate with vocals in a song that ideally suited for motoring along the highway in convertible classic T-Bird, preferably cherry red. "The Day The Earth Will Die" is a surprisingly upbeat piece for such a dire subject, that mixes the 60s with a a heavy late 70s rock sound. Here, a few hints of Yes can be heard in the guitar work.

Changing styles a bit again, the title track "Fly Away" has a dreamy sort of feel like Pink Floyd's "Breathe," though the keyboards change the character slightly. Actually, most of the Floyd-ness is in the way vocalist Peter Scheu delivers the lyrics. Spacey keyboards do bring back a bit of the "neo-prog" feel ?

The bonus track is "Sunflower," which is a shimmery, chunky, funky piece that belies its vintage? that is, but for the jazzy blues guitar soloing through it, it might be mistaken for proto-disco, given that funky beat.

All in all, Fly Away is fairly decent album, and sure to be of interest to "neo-prog" fans. Sure, it has a very raw sound, but I think that only adds to its charm.

First released by the band themselves.
by Stephanie Sollow 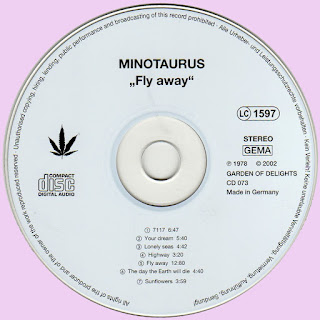 Free Text
Text Host
Posted by Marios at 9:19 AM 11 comments: