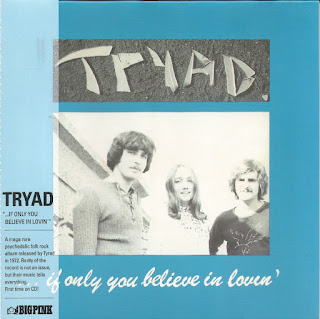 Tryad's If Only You Believe In Lovin', originally released in 1971 as a private press. Ultra-deluxe LP reissue on the newly resurrected Del Val label -- obscure but legendary label previously responsible for early editions by The Brigade, The Bachs, Bent Wind, D.R. Hooker, Fifty Foot Hose, etc. Long overdue and much delayed reissue of this 1971 NYC private press few have heard and less have seen. Comparable to the best UK folk-fusion LPs of the era, this is like a Yankee version of Hunter Muskett's great Every Time You Move (1970) with co-ed vocals plus bass/drums/pedal steel/flute/keys accompaniment and East Coast haunted not West Coast hip, though you'll be reminded of a certain revered private from out there that wouldn't exist for another five years: Relatively Clean Rivers.
"Low key but really cool. Hard to believe it's an NYC piece from '72 from a sonic aspect. There's a kind of innocence to overall heft that puts me in mind of very early Bay Area stuff, like the second We Five LP (1967). That same sort of psych-is-hanging-unnamed-in-the-background vibe. The only thing that really places it in the '70s is that pedal steel which has a definite post-Sneaky-Pete feel. Very cool."
by Byron Coley
Tryad was a trio featuring Jim Lasko, Jesse Lanzillotti, and Norine Lyons. This 10 song LP ranges in influence from basic melodic folk with great harmonies on "Columbia Tavern" to west coast influenced country rock on "Something Sweet In Dying" to the acid folk feel of "Eulogy Raga"
When looking for an album, I usually check out the back cover as most people do, especially in the case of a new group, and ask myself what, if anything, does this group have to say. I like some indication that the album is worth listening to.
This is Tryad’s first effort, I listened and they have something to say, about people, about conscious freedom, about contemporary values.
Within their lyrics, Tryad reveals an intimate personal commitment, and the music gets it across with harmonies that are contrasted against the lack of harmony in our surrounding culture today.
Anyone for a chance at self-doscovering?
by Buffalo Dick Burch, Original Album Liner Notes 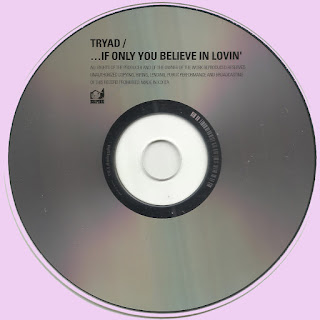