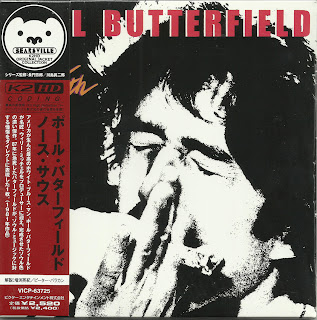 Butterfield the blues harp master would keep busy with session work through the end of the 1970s, and toured with the Band's Levon Helm and his RCO All Stars.  Paul Butterfield remained signed to Bearsville Records, and made his proper solo debut in 1976, releasing  "Put It In Your Ear" in Los Angeles with renowned sessioneers like Chuck Rainey, Timothy Drummond, James Jameson, Fred Carter, Jr., Ben Keith, Eric Gale and Bernard Purdie, as well as Levon Helm and Garth Hudson of The Band.

“North South” (referring to 1966’s “East West”) was recorded in 1981 at Hi Records’ Royal Recording Studios in Memphis, and was produced by the legendary Willie Mitchell. It features Hi’s rhythm and brass sections playing throughout.  In a sense it's not a bad album, but it’s far out from the older recordings, not even to his most recent, but judging the situation and the period production with the overuse of synthesizers and stuff like that I think it sounds pleasant.

In 1986 he released his last album, "The Legendary Paul Butterfield Rides Again". Butterfield died in May 1987 at the age of 45, suffering a heart attack that was probably brought on by years of drug and alcohol abuse. 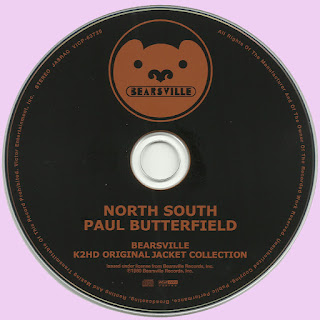